“Right on impact my frenulum snapped in half. That was the most painful thing ever,” the staffer recounts 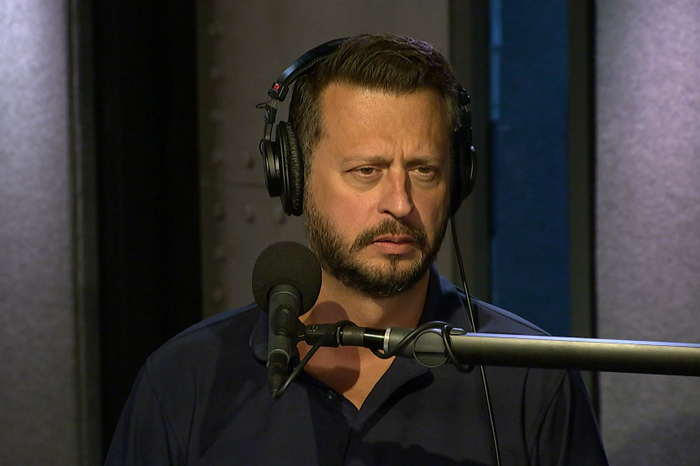 A trio of men shared painful penis stories with Howard on Monday morning, including the Stern Show’s own Sal Governale.

The first was a caller from Kentucky named Eddie who told Howard he had injured his penis during a recent sexual encounter. “I was banging this chick and she broke my dick, basically. Like Dennis Rodman,” he said, referencing a similarly gruesome anecdote the basketball legend shared on the Stern Show back in 1999.

While Eddie hasn’t suffered any major setbacks, he did tell Howard there’s a chance the injections can rupture the tubes in his penis which cause him to get an erection and if that happens he’ll have to go under the knife to try and repair the damage. “They slice your dick open like a banana for the surgery,” Eddie explained.

After hearing Eddie’s story, Sal came into the studio to tell Howard about a similar injury he once endured. The staffer said it happened when he was about 17 and getting intimate with a woman in the front seat of a car. “She went to slide down on me, and she was slightly dry … She went real hard and fast,” he recounted. “Right on impact my frenulum snapped in half. That was the most painful thing ever. It was horrible.”

He said there was blood and he freaked out but instead of going to the hospital he went straight home. When he told his mother the next morning she took him to a doctor but apparently there wasn’t much they could do. There were no garlic and yogurt treatments to be had, the doctors just wrapped his broken penis in gauze like it was a sprained finger and sent him on his way.

Sal told Howard his injury has since healed but the experience won’t soon be forgotten: “It was snapped clean in half. It was nuts. So people should lube up—lube up out there.”

Monday’s penile horror show didn’t stop there. Next, a caller named Tony phoned in to talk about Peyronie’s disease, a condition he suffers from that causes his penis to bend dramatically. Unlike Sal and Eddie, Tony problem’s didn’t begin with a sexual encounter gone awry—in fact, he’s not even sure how it happened.

“All I know is that a year and a half ago, right up towards the head, my dick took a sharp right turn,” he said.

Like the first caller, Tony’s ongoing treatment involves regular injections in his penis. In the interim, thankfully, he said he isn’t experiencing any pain and his penis still functions normally. “It I don’t like the way it looks, but no one else complains,” Tony said.

Finally, Howard fielded a call from a board-certified urologist named Dr. Josh who said he deals with penile injuries on a weekly basis. He confirmed Peyronie’s disease is more common than most people think, especially in the Viagra era. The doctor revealed the penis trauma usually occurs during one of two scenarios: either the man pulls out from behind and hits his penis on his partner’s pubic bone, or he gets injured because there’s a bigger girl on top.

“The story is the same every time,” Dr. Josh said. “Guys actually hear a pop.”

The doctor encouraged listeners to be proactive about their penile health, explaining the quicker these problems are diagnosed the more options men will have when treating them. But he also cautioned those with penis injuries against holding out for a miracle. “Almost nothing gets you perfectly arrow straight again, even surgery,” Dr. Josh concluded.