“This news is a game changer!” the actress exclaims to Howard 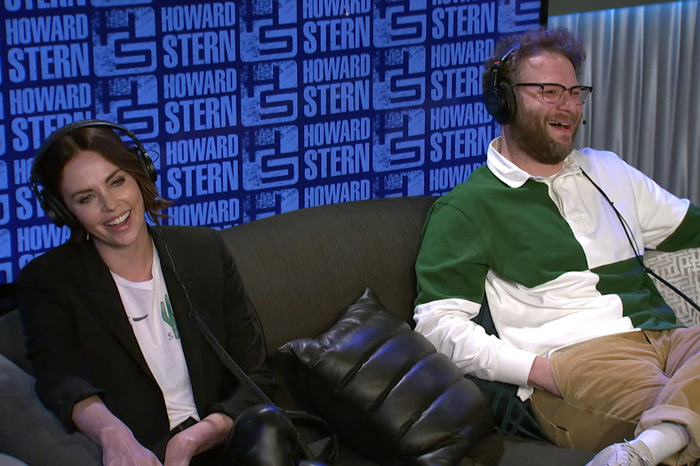 From the moment he first read the script for “Long Shot,” Seth Rogen knew the only woman he wanted to share the screen with him in the political comedy was Charlize Theron. Had she not accepted the role, he told Howard the movie simply would not have been made. Thankfully, Charlize said yes to playing presidential candidate Charlotte Fields who falls for Seth’s character, Fred Flarsky, a ham-fisted freelance journalist who finds himself in some pretty embarrassing situations throughout the film.

“Seth, you do something very brave in the movie – you come on your own beard,” Howard said on Monday morning with the two co-stars sitting together on the Stern Show couch.

“It’s actually happened between when I filmed that scene and now,” Seth said with a laugh. “Sometimes you just want to see how far it’ll go.”

“This news is a game changer!” Charlize exclaimed. “I’m realizing, as we’re doing this press junket, I should’ve asked so many more questions.”

It’s not just self-love showing up in “Long Shot,” though. Charlize and Seth also share some intimate moments in the movie and they told Howard the key to a good onscreen kiss is committing to it right from the start so that it only takes a few takes to get it right. And while the two have undeniable chemistry in the new rom-com, Charlize admitted she’s had to truly fake falling in love with some of her co-stars in the past.

“I’ve had great chemistry with full-blown assholes who I just don’t like,” she told Howard. “It was rough … You close your eyes and visualize a happy place.” 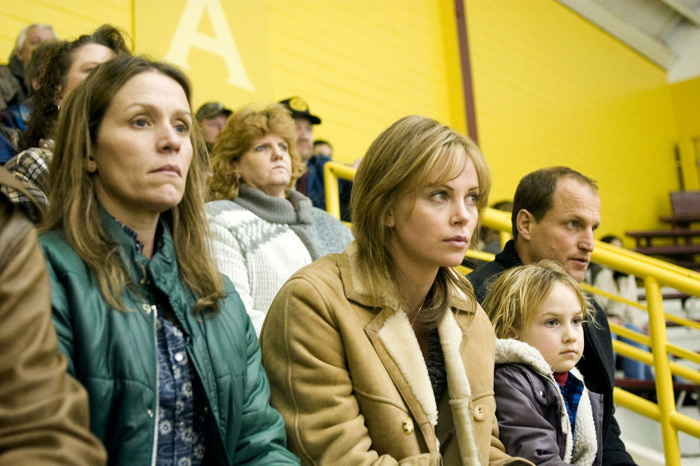 Charlize wouldn’t give any names of co-stars she disliked but she did point to fellow Oscar winner Frances McDormand as someone she thoroughly enjoyed working with. The two starred in 2005’s “North Country” together and have remained close ever since. So close, in fact, Charlize recently sent Frances a pair of panties she had specially made for her that included some choice quotes Frances delivered during the 2018 award season.

“She’d made these really funny, like, zingers and I just had this company print them on the underwear,” Charlize explained. “I know her sense of humor … She’s the best. I just love her on every level.”

Also due out in theaters later this year is the much-anticipated film centered around former Fox News CEO Roger Ailes and the sexual harassment scandal that changed the network forever. Charlize stars as newswoman Megyn Kelly, whom she said she tried to portray as honestly as possible.

Unwanted sexual advances and a misuse of power is something Charlize experienced very early on in her career. She told Howard when she was either 18 or 19 years old and out on her very first acting audition she had a movie producer make a pass at her.

“He was a very big deal and is still a very big deal,” Charlize said of the man who had invited her to his house at 9 p.m. on a Saturday to try out for a part. Not knowing any better, Charlize showed up ready to read lines. The producer, who answered the door barefoot in his pajamas, was more interested in having a drink and chatting her up, however.

“And then at one point he put his hand on my knee,” Charlize recalled. “You just go blank. Like, you don’t know what to do. But I left. I don’t even know how I got out of the house.”

Driving away in her rented Ford Fiesta, Charlize said she was upset she’d been so polite at that moment and wished she’d instead told the producer off. “I was so angry with myself that I didn’t say something,” she continued. “I’m not that kind of girl. Like, why did I not tell him to go fuck himself? It made me so angry.”

Little did she know she and the producer would cross paths again someday.

“It took me eight years for this thing to come full circle because he offered me a job and I went purely just to have my moment,” she revealed.

During their second face-to-face meeting, the producer told Charlize it was nice to meet her. “I said, ‘No, we’ve met before.’ And he had no recollection of it,” she told Howard.

Though she’s had her hands full the past few years being a mom to her two children, Charlize told Howard she’s been going out on dates lately and is ready to find love.

“My time is opening up a little bit more,” she said.

Seth said he unfortunately doesn’t have any friends he can think of to set Charlize up with, but after working with her on their movie he’s confident she’s a catch. “I don’t think you’re the problem,” he told his co-star.

As busy as Seth is between his many movie and TV projects, he’s still somehow finding the time to launch his new company Houseplant, a recreational cannabis brand aimed at making it easier for people who love weed to get the quality product they want. Getting his hands on the good stuff is rarely a problem for Seth, even when he’s at A-list parties. He told Howard about being at an event once and having his friend offer him a joint. It was while the two were smoking outside that film director Steven Spielberg approached him.

“It was this awkward moment … Steven Spielberg came up to me, like, as I had this joint in my hand and I could just tell, like, he did not like it,” Seth said with a laugh. “And then you’re confronted with this thing where it’s like, ‘Do I fucking try to hide it? Do I just keep smoking it?’”

“I’ve run into him a few times and he always seems a little disappointed in me,” Seth added.

Spielberg may not be a future Houseplant customer but it sounds like Charlize might be looking to spend some green on Seth’s weed. “He’s helping me out because I used to be like a wake-and-baker in my 20s and then something changed in my early 30s,” Theron explained, saying she eventually became extremely anti-social whenever she smoked.

Howard only wished he’d gotten Seth’s advice before he smoked with his “Private Parts” co-star Mary McCormack several years ago. He confessed to taking three hits and immediately feeling uneasy.

“I turn to Mary and I said, ‘Mary, I’m in big trouble. I’m freaking out. I better go back to my room.’ And she goes ‘Suck it up!’” Howard remembered. “I went right to my room and that was it.”

“And then you came on your face?” Charlize joked.

Charlize Theron and Seth Rogen star together in “Long Shot,” in theaters May 3.