Dr. David Agus returned to the Stern Show Wednesday morning offering hopeful news for listeners worried about the pandemic. Howard had several specific coronavirus-related questions for the renowned physician and repeat show guest, but first he wanted an update on how the battle against COVID-19 had progressed since his visit in early April. “Where are we at? Are we better off or are we worse off?” Howard asked.

“We’re significantly better off,” Dr. Agus said. “We have a drug that now works. It’s not a magical drug, it’s not a cure-all, but it significantly shortens hospitalization and lowers death rate.”

The new drug is called remdesivir and while Howard and co-host Robin Quivers both had trouble remembering its name, Dr. Agus assured them it will be a difference-maker for people battling COVID-19. “We can actually treat this disease and have a high likelihood of surviving hospitalization and even going on a ventilator,” he said, later adding, “It’s the first drug that definitively works.”

Remdesivir hasn’t been put into widespread use yet, but Dr. Agus thinks that could soon change. “It was delivered yesterday to pharmacies to be used in patients with COVID-19,” he said, adding, “As we get more of a supply hopefully we’re start to treat people earlier.”

Prevention is always preferable to treatment, of course, and Dr. Agus assured Howard that scientists have made progress on that front, too. “We’re working on a vaccine and there’s a possibility the vaccine could be here in early fall,” he said. “Can you imagine? They just give you a vaccine and, hopefully, we’re done for a while.”

But Dr. Agus admitted creating a vaccine is just the first step. Health experts will also need to convince enough Americans to take the vaccine that the country develops a herd immunity. “This vaccine may have to be mandatory,” he said. “We have to think of each other … If you don’t wear a mask, you can hurt others, you know especially the elderly and people with medical issues. If you don’t get a vaccine, you can hurt others. That’s the argument. That’s what we have to say.”

“Would this vaccine be so effective that it would eliminate our chance of getting COVID-19 or would there still be some chance?” Howard asked.

“The thought is that if you get a vaccine it may be a yearly vaccine to boost your immune response, so every year you have enough immunity to fight off the virus,” Dr. Agus said. 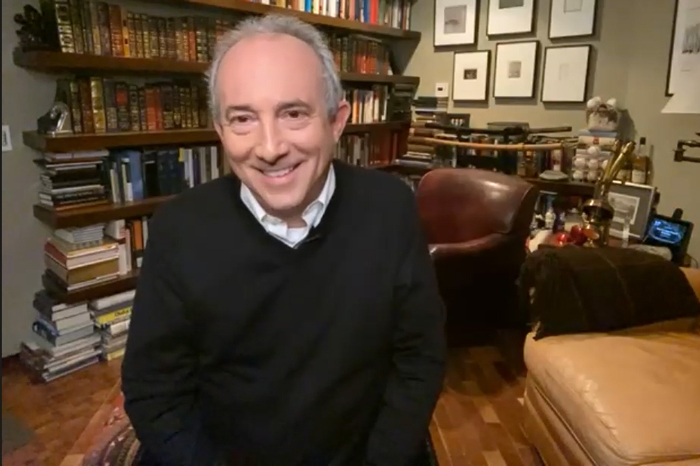 Howard wondered if those who’d contracted the virus could get it again.

“My gut is you’re immune for a period of time. The question is how long is that immunity, and we just don’t know since we’ve only been studying it for several months,” Dr. Agus said. “There’s no documented cases yet of somebody getting it twice, yet … we worry about that but there’s no evidence of reinfection.”

Howard was also curious why the virus wreaks havoc on some people while leaving others asymptomatic.

“It’s a dastardly virus—and I don’t use that word often,” Dr. Agus said. “In New York City, almost 95 percent of patients hospitalized had either obesity, diabetes, or elevated blood pressure. Period. Why does it discriminate against those people? We just don’t know.”

As governors across the country wrestle with the prospect of rescinding stay-at-home orders, Dr. Agus said he’s concerned about what happens next. “This virus is going to go through the summer,” he said. “Hopefully it will stay under control as we let people out of the stay at home orders—and I’m worried about that—but the real hope is the vaccine,” he said, adding,

“If you have blood pressure issues, diabetes, obesity, or are elderly, I want you to stay home,” he continued. “Everybody else we’re gonna let out, and there are going to be some cases. Hopefully we can identify who they are and contract trace … and it doesn’t spread like wildfire.”

The prognosis seemed good for not only much of America but hopefully for Robin Quivers, too. She recently injured her foot and isn’t sure whether to venture out into the world to have it checked out by a doctor, though she said Wednesday morning the situation was improving. “If you can walk on it, no I don’t want you to get an X-ray. If it’s really troubling and you can’t walk on it, of course we should get an X-ray,” Dr. Agus told her.

“I’d cut off my foot before I got get an X-ray, I’ll tell you that,” Howard joked.