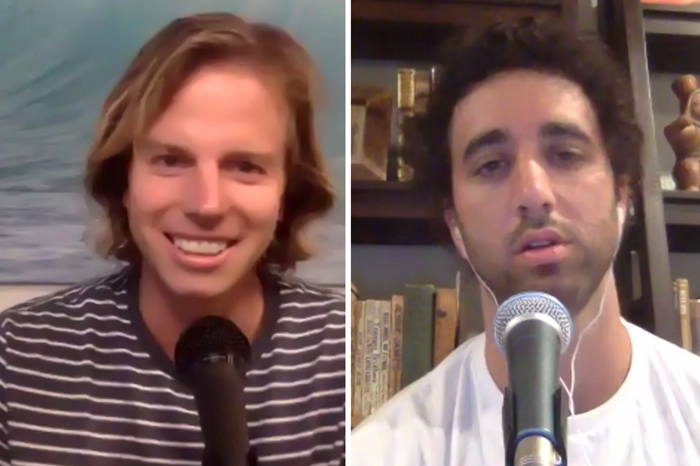 Party enthusiasts turned civic activists Chad and JT returned to the Stern Show on Wednesday, sharing thoughts on a wide array of noteworthy subjects from penile pride to beer pong safety during the coronavirus pandemic. The duo also discussed doing their part to stop the spread of COVID-19 as well as their viral video which showed them nearly getting assaulted while handing out masks at the beach.

“Originally, we thought it was like a shortage. Like, I was surfing in Huntington Beach and no one was wearing a mask and I thought, ‘Oh, the supply chain must be boned up.’ But then we just found out that people think they suck,” Chad told Howard. “We didn’t really ask to be the face of activism or masks—we just want to party—but I’m stoked that we’re sending a good message to the youth,”

“They were so angry with you. Did you think you were going to get your ass kicked?” Howard asked at one point.

“[It] was close,” Chad told Howard. “I think we know how to diffuse the situation, but JT picked up his sandals and it looked like he was getting ready to run.”

“Are you going to hand out more masks?” co-host Robin Quivers asked.

“Yeah, for sure,” Chad said, explaining their next stop was his hometown of San Clemente.

Howard thanked Chad and JT for their civil service, suggesting they should one day receive a Medal of Freedom. He also wondered how they were holding up during quarantine. What were they even doing for food?

“When Daniel Dae Kim from ‘Hawaii Five-0’ got it, that’s when we knew like, ‘Okay, corona was for real,’” Chad said. “So, we beelined it to Costco and bought like 200 hot dogs. Howard, I don’t know if you know this, but you can freeze meat. Pretty cool.”

“Are you having a hard time with the isolation?” Howard asked.

“Yeah, it’s hard not to rage. It’s hard not to share my vibes with people when I’m feeling dank,” JT said. “I could get fired up and be loud and dance and moon people … and now when I moon there’s no one around to guffaw.”

During their last appearance, the Chad Goes Deep stars introduced a proposal for a second Fourth of July holiday to help Americans rage all summer long. This time, they served up a new idea to make pandemic parties safer: beer bong masks.

“When corona first hit we knew beer pong was in hot water, so we tried a bunch of different methodologies, you know? We tried like a hazmat suit,” Chad said. “But JT had a really good idea for a face mask.”

“I had an idea for a semi-permeable mask that doesn’t let particulates out but lets beer in. It worked the same way two-way glass works in an interrogation, you know like in ‘SVU,’” JT said.

“You two have a lot of really great ideas,” Howard told them.

Chad and JT’s great ideas garnered plenty of attention after their 2019 Stern Show debut and the duo has since appeared on various podcasts and news segments to elucidate audiences on their enlightened brand of raging. But not every network welcomed their insights with open arms. In fact, “Watters World” host Jesse Watters quickly ushered the guys off the air after they broached the subject of “small dong shame” during an interview (below). According to Chad and JT, Fox News Channel now refuses to invite them back.

“I was surprised. You tried to bring up a tough subject for a lot of men,” Howard said. “I welcome the movement.”

“We were just trying to go on a big platform and be honest about our little hogs, but apparently it’s uncouth to talk about dongs on Fox,” Chad said. “Or maybe the fact we talked about small dongs made it even worse.”

“We’re just trying to fight small dong shame, you know? I think if we go out there and we’re proud to have little hogs, it’ll get more people out there streaking,” Chad continued. “And as you all know, streaking boosts stoke.”

“Most of the dong pieces in antiquities and in sculpture are super tiny and I think it makes it more elegant,” JT agreed. “So, yeah, I’m fired up on old art and the way they were kind of modeling what a beautiful penis looked like.”

“Hopefully the culture shifts back to the antiquity days where having a small dong is all the rage,” Chad added.

During their last visit, the so-called Party Bros told Howard all about their “epic” workout with fitness advocate, former governor, and fellow Stern Show veteran Arnold Schwarzenegger. This time, they revealed there are drawbacks to spending so much time in the gym.

“The more I shred my quads, the smaller my hog looks,” Chad said.

“I kind of relate it to a silverback gorilla,” JT added. “They got like a jacked torso, huge legs, and a really tiny pecker. So, the more jacked I’m get I’m just moving into that primate stage.”

Regardless, they plan to keep working out their legs and swinging around kettlebells to their heart’s content. “It boosts ‘T,’ testosterone, and honestly it boosts my stoke for like at least three days,” Chad explained, adding that JT was the “kettlebell master.”

“That’s maturity, just realizing how valuable legs are,” he concluded. “You get older and you just realize what’s important.”