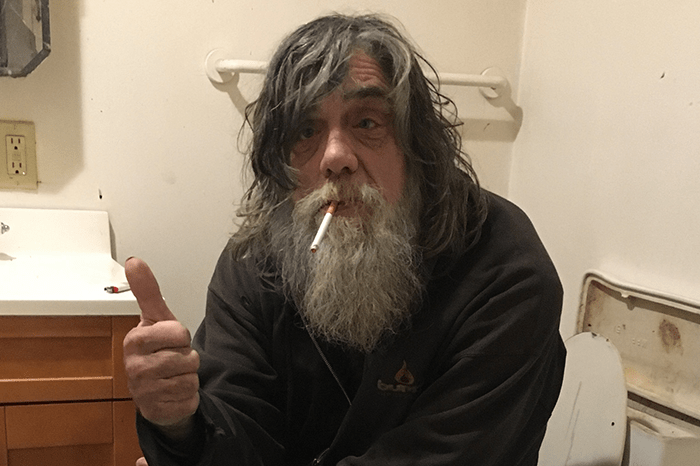 Howard treated listeners Tuesday morning to a Bigfoot update for the ages, though the clips he played weren’t for the faint of heart. Stern Show correspondent Wolfie recently caught up with the Wack Packer and his two new companions, Kelly and Panther. The trio spoke candidly about everything from Bigfoot’s incessant pimple popping to what falls off him in the shower, but things eventually took a turn and the Wack Packer was forced to call the cops.

“Bigfoot has a new roommate almost every time we check in with him,” Howard said before playing several clips. “They get there and they won’t leave. It sounds worse than the Munsters’ house.”

“His door is just unlocked and you never know whose gonna walk through the door,” Wolfie agreed.

Wolfie interviewed Kelly first, asking him about Bigfoot’s grossest habit. “He’s always fucking picking his ass or something, he’s got his hands down his pants,” Kelly said, explaining the phenomenon occurs multiple times each day. “But he is a Bigfoot. He sheds. He’s got pimples on his ass, I guess.”

“What does he pull out of there?” Wolfie asked.

“Who knows? He won’t wash his hands for me,” Kelly said.

Never one to be embarrassed, Bigfoot owned up to the behavior. “I have pimples on the cheeks of my ass,” he told Wolfie. “I pop them … I wipe them on my pants.”

“Why do you think you have so many pimples on your ass?” Wolfie wondered.

“I have no idea. When I was up in Newport I fucked a lot of girls up there. It could be something they gave me. Who knows?” the Wack Packer said.

“Jesus, that’s amazing to me,” co-host Robin Quivers said after hearing the clip. “He fucked a lot of girls up in Newport?”

“I know a lot of guys who can’t get laid,” Howard laughed.

Bigfoot has let the Stern Show into his bathroom before and this time around he opened up about his shower habits, explaining strange stuff comes off his body in the rare event he decides to wash up.

“One day I was in the shower and this weird fucking bug comes jumping off me,” he said.

“What kind of bug?” Wolfie asked.

“I have no fucking idea. Like I said, I got spiders in here and who knows what else I got in this fucking place?”

Arachnids didn’t turn out to be Bigfoot’s only unwelcome house guest, either. Wolfie also interviewed Panther, who apparently lost her toe after kicking a table in prison. Incoherent though she sometimes was, Panther offered up nothing but kind words about Bigfoot. “He’s awesome. He has never ever done anything wrong and he always shows me respect,” she told Wolfie, adding, “He supplies my weed, or my caffeine, or when I needed help when I was pregnant he always had my back.”

According to Bigfoot, however, Panther misrepresented their relationship. That’s not all she reportedly did, either. “She was pulling knives on me and Kelly, waving them around and every-fucking-thing else,” Bigfoot told Wolfie, explaining things got so bad he called the cops to his home.

“Do you think Panther went to jail?” Wolfie asked the Wack Packer.

“I had no fucking idea. I hope so,” he responded.

Howard and Robin were stunned by what they heard. “Panther is so wild she makes Bigfoot sound reasonable,” he concluded.