Ronnie Mund Opens Up About His Love for Dogs

Ronnie Mund Opens Up About His Love for Dogs

“I don’t think I’ll ever have a dog like that again ever,” Howard’s longtime driver says fondly of his deceased pet 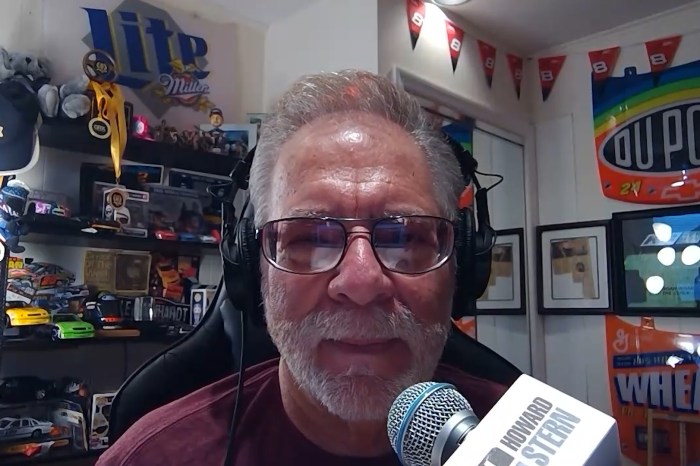 A revelation by Ronnie Mund Wednesday that his fiancée Stephanie’s dog Gracie is being treated for cancer turned into a tribute to many of the canines he has owned over the years – especially his dog Dudley, who is memorialized in tattoo form on his arm.

“I hate all that. I love my animals, I just don’t like when they die,” a sympathetic Howard agreed.

“The dog’s always here,” the driver admitted. “She has a bed on the floor right next to the bed. … before she got so old, she used to be in the bed. When Dudley was alive, all of us were in there together.”

Ronnie’s childhood dog was even more in the mix. “Sporty would smell my ass … he would smell my ass all the time,” he confessed before remembering his pet’s voyeuristic tendencies. “I loved that dog, he would sit at the foot of the bed and just sit there and watch sometimes … the weirdest thing ever.”

Shifting back to Dudley, Ronnie painted a special bond that, to him, was more human-like. “I don’t think I’ll ever have a dog like that again, ever. He was amazing,” he said before explaining the lengths he goes to in order to pay tribute to Dudley. “I still think about him all the time. I light candles for him on his birthday, I light candles for him the day he died, I go to the cemetery and visit him.”

When pressed, Ronnie described not only Dudley’s final resting place – which Gracie will join once her time comes – but the intricate celebration of his life they had for him. “When he died, we had a whole funeral,” he said before getting emotional. “We had 30 people there in the snow and the rain … they all knew the dog. Even his veterinarian came.”

“The sad thing is, like a guy like Sal won’t get a funeral as nice as Dudley,” Howard joked, referring to Stern Show staffer Sal Governale. “I think Sal’s family will flush him down the toilet.”

Chelsea Handler on Telling Jokes With Dave Chappelle, Putting Herself Out There With Andrew Cuomo, and Why She Absolutely, Positively Doesn’t Miss Late-Night TV