Plus, listen to a young Gary Dell’Abate cover the ex-Beatle’s Long Island vigil in 1980 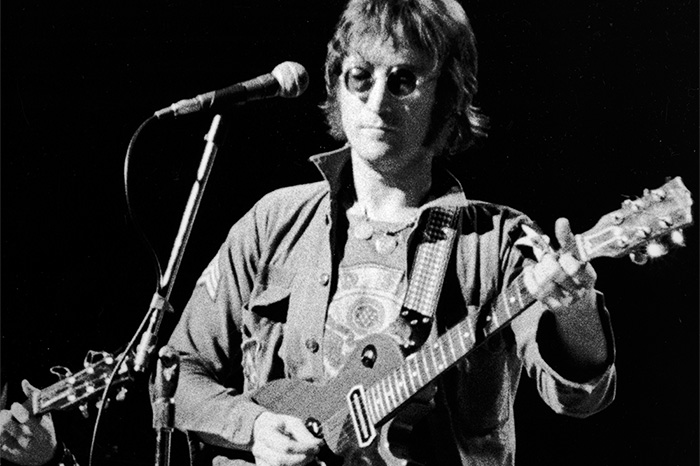 It’s been forty years since the tragic death of former Beatle John Lennon and on Tuesday, Howard paid tribute to the music legend – someone he has made no secret of admiring throughout his entire career. “In my lifetime, there has been no more important figure in our culture, in our world, than John Lennon,” Howard said, putting him in the same category as President John F. Kennedy and civil rights leader Martin Luther King Jr. “John Lennon for me was so brilliant, was such a genius. The words, the music, the attitude, the pure invention.”

Playing works from both Lennon’s Beatles and solo catalogs, Howard remembered him as a prolific, one-of-a-kind songwriter. “Ever since he was a little kid, he thought he was different and he wasn’t sure if it meant that he was crazy or he was brilliant because he didn’t see the world other people did and that’s what this song is about,” he said of “Strawberry Fields Forever” before marveling at his music on a whole.  “All these songs came out of one guy.”

Co-host Robin Quivers remembered the impact the Beatles’ “Come Together” had on her own life, albeit in a not so dramatic fashion. “I got in trouble in high school because I was singing this in the hall,” she recalled with a laugh. “The teacher grabbed me and said, ‘Don’t you dare sing that song, don’t you know that’s a drug song?’”

And while much has been made of late sportscaster Howard Cosell breaking the news of Lennon’s death on “Monday Night Football,” lesser known is Stern Show executive producer Gary Dell’Abate’s coverage on Long Island radio station WLIR.

“They did a big vigil in Central Park and everybody on the A-team from WLIR went to cover that, so there was a vigil on Long Island and they just sent an intern,” Gary said of his role at the station that day.

“With a Long Island accent,” Howard observed after hearing the coverage. “That was definitely a Long Island radio station, there’s no doubt.”

Check out audio of Gary’s reporting on the local vigil (below) and click here for the Stern Show’s celebration of John Lennon on the SiriusXM app.