“He snapped,” the Stern Show staffer says of his “Sopranos”-inspired squabble with Howard’s longtime stylist 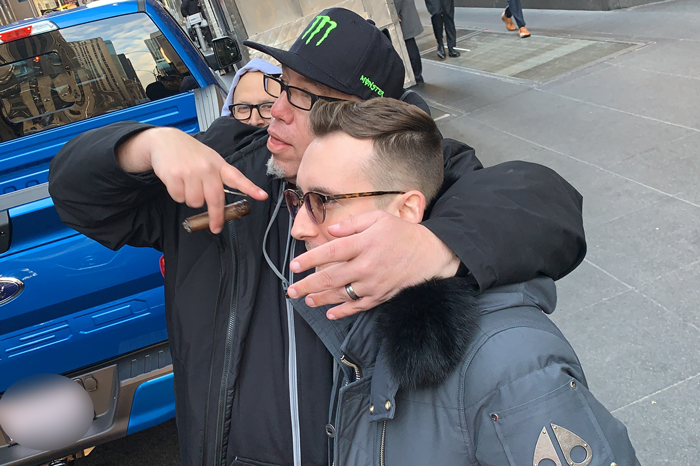 High Pitch Erik and Chris Wilding together in New York back in January Photo: The Howard Stern Show

He told Howard his on-again, off-again friendship with Ralph was tested once again during a recent discussion of the ambiguous ending to “The Sopranos.” Chris believed the acclaimed mobster drama’s 2007 finale was a letdown, Ralph sharply disagreed, and their difference of opinion eventually escalated into a full-blown argument via text.

“He snapped and said, ‘You know what? You don’t have the right to comment because you’re just a low-level writer who writes dick jokes for a living and that’s all you’ll ever be,’” Chris recounted, adding, “I said, ‘Okay, if you’re going to be that nasty, I guess that’s the end of a friendship.’”

Howard was shocked his longtime stylist would even try and make that case. “As far as I know, Ralph doesn’t even have a job except for dressing me, and that went out the window,” he said.

“You’re a dresser—what do you have the right to comment on?” co-host Robin Quivers agreed. “Maybe fashion … but not the ending of ‘The Sopranos.’”

Ralph eventually called in to share his side of the story. “I love Chris and I thought he was a good friend … I thought we were joking around and then I said something and he just turned on a dime,” he told Howard, explaining he called the staffer up afterward to apologize.

“We can wear masks,” High Pitch told him. “I could feed you ice cream, six feet apart, with a long spoon. We could jerk ourselves off. I can spray whip cream in your mouth. We could order takeout. We could order Burger King or McDonald’s.”

“Mmm, what do we get from McDonald’s?” Chris wondered.

“Two 20-piece McNuggets,” the Wack Packer responded. “And we can order two apple pies: one for me, one for you.”

The duo’s phone-sex session ultimately lasted about 20 minutes and contained several unexpected twists, like Chris roleplaying as a COVID-19 patient and Erik pretending to be his needle-wielding nurse. At one point while talking dirty, the Wack Packer even found an opportunity to lambast New York City Mayor Bill de Blasio.

“Eric has two gears: hungry and angry,” Howard surmised after hearing the clip. Take a listen (below).