Celebrated hypnotist Scott Schmaren made his return Tuesday morning and once again hypnotized the Stern Show’s very own Sal Governale. In previous memorable encounters, Scott tricked Sal into thinking his penis disappeared and enabled him to remember a past life as a turtle. This time, he helped Sal tap into the Great Beyond.

Before bringing out Sal and his cadre of dead celebrities, Wack Packers, and rodents, Scott explained a little more about his craft. “People think of hypnosis as a man with a goatee waving a watch in front of your face,” the clean-shaven guest told Howard. “The stage shows are fun, they’re great, but the reality is hypnosis is a natural state of mind.”

Working with Sal via Zoom this time, Scott hypnotized the staffer into believing he could tap into the spirit world and serve as a medium for the dead. “I told him he had the power and the ability to connect with anything, whether it’s a human, animal, or anything that’s living or has passed on to another realm,” Scott said, explaining it didn’t take too much convincing as Sal already believed he’d been subjected to several supernatural run-ins. 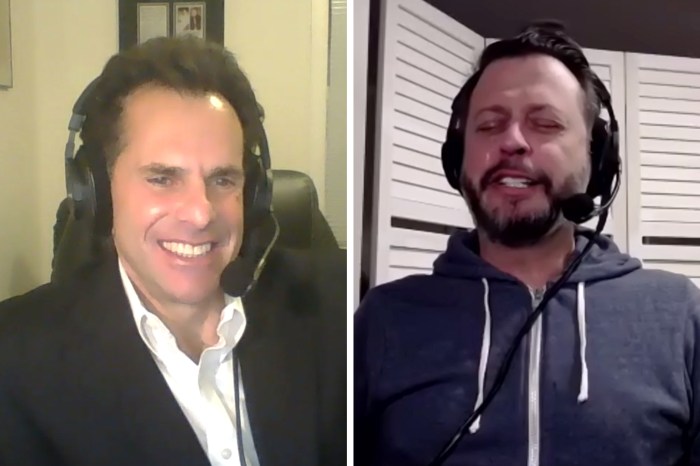 Executive producer Gary Dell’Abate told Howard the hypnosis had worked: Sal was at that very moment in the Green Room, channeling recently deceased rock icon Leslie West. “Sal’s like really talking to Leslie right now,” Gary said, explaining his co-worker thought the late legend was both his spirit guide and a gatekeeper to the land of the dead who could summon virtually any soul—with the exception of a “too fresh” Larry King—to speak with him.

Howard had several questions. “What is Leslie telling you?” he asked Sal.

“This guy is like the greatest guy ever. His energy is amazing. He’s so loving, so caring. This guy does not judge anyone,” Sal said. “He’s saying, ‘Sal, I got your back.’”

The staffer apparently didn’t see Leslie as he was in his final days, but how he was in his heyday back in the ‘70s when he still had full control over his legs. “He’s not as heavy as he was back in the early days of Mountain, but he has a little bit of a belly,” Sal said, adding that Leslie was communicating with him from heaven.

“Ask him if being dead is better than being alive?” Howard said.

“He just jumped in and said, ‘Dude, no comparison,’” Sal responded.

Curious which other spirits Sal could channel, Howard first inquired about the ghost of Adolf Hitler. But the hypnotized staffer wasn’t having it. “Hitler is in a dark place. It’s not hell but he’s not in a level of light that Leslie is in … It’s cold and dark and he’s got trillions of years to go until enlightenment,” Sal said. “No way, no how—nobody sees Hitler.”

But Sal did manage to summon Nicole Brown Simpson, who was murdered tragically in 1994. She told Sal she wasn’t upset about her own death but she felt tremendous pain about how much her kids have suffered since then. “She wants them to know that she loves them and they’re going to do well,” Sal said.

“This is amazing, Sal,” Howard said.

Next, Sal then summoned Eric the Actor, who died in 2014. “He’s glowing,” Sal said, explaining the beloved Wack Packer was about six feet tall in the afterlife, handsome, and no longer bound to a wheelchair. “You made him happy [on Earth] and now he’s even happier that he’s moved on,” he told Howard.

“Happy? Are you sure it’s Eric? Eric the Actor?” Howard laughed.

“He wants to put your mind at ease, to let you know that he’s beyond great and that would make you happier than him being in a wheelchair, saying ‘Ack, ack,’ and being angry,” Sal insisted.

The staffer went on to channel co-host Robin Quivers’ abusive father, one of Howard’s supposed long lost relatives named Mary, comedian and longtime Stern Show guest Joan Rivers, and Emmy-winning actress Valerie Harper, who once promised Howard she would reach out to him from beyond the grave with a secret word only the two of them know.

“If she could tell you the secret word, then we know you’re really talking to the dead,” Howard said. “It is such a random word.”

Valerie apparently wasn’t feeling very talkative because she wouldn’t share the word outright with Sal. “She’s trying to send me clues to this word,” he said.

“Don’t think about it, Sal. Just allow it to happen,” Scott instructed.

“It’s related to wood, Howard. There’s wood in this word,” Sal said. “This is an object, Howard. It’s definitely an object.”

“My confidence in this is not that great,” he continued. “Alright, I’m going to come out and say it. I know it’s a wooden object, for sure, because I see a big tree … it’s a broom.”

“Broom” was not the word. Neither were “tree bark” and “that kerchief on her head,” his follow-up guesses, but they still gave Howard and Robin a good laugh.

The final spirit Sal summoned was one of the squirrels he communicated with earlier this month.

“Squirrel, what were you trying to tell Sal?” Howard asked.

“I was trying to tell Sal we are all connected … every step that you take, every breath, every motion that you make,” the squirrel said via Sal. “Respect the trees, respect people, never judge, and don’t take our beautiful universe for granted.”

Howard couldn’t help but wonder why the unusually wise rodent chose Sal as a conduit for his wisdom.

“I go to those who seek answers,” Sal the Squirrel said. “If you or anyone else wants answers, you too will receive them if you ask for them, whether it be in the form of me or a tree or a human being or the sea or the mountains.”

The conversation got decidedly less philosophical from there as Sal opened up about the squirrel’s sex life, genitalia, and how to clean squirrel ejaculate off fur. For what it was worth, Scott and Robin were impressed to hear Sal speak about squirrel sex in such a clinical fashion.

“As a squirrel, he has a lot more class,” Howard agreed.

AUDIO: Howard’s Benjy Impression Gets Stuck on the Toilet in New Prank Call

VIDEO: Gary Dell’Abate Gets Ribbed by King of All Blacks After His Wife Passes on ‘Bang O’Clock’