Mick Jagger, one of rock ‘n’ rolls all-time greats, made his debut Stern Show appearance on Wednesday, sitting down with Howard during a special afternoon show for a career-spanning conversation which touched upon everything from the iconic frontman’s dance moves and songwriting process to his thoughts on the recent passing of one of his longtime bandmates. The famed Rolling Stones frontman has been releasing hit records and touring sold-out arenas since the early 1960s, so needless to say he and Howard had plenty of ground to cover.

THE BAND PLAYED ON

The world of rock ‘n’ roll suffered a major loss last month with the death of iconic Rolling Stones drummer Charlie Watts. Both his memory and his music lived on, however, and when the band kicked off the U.S. leg of its No Filter tour last week, they started the show with a moving tribute to their fallen bandmate. Much has been made of the Rolling Stones’ decision to tour without Watts, but during his Stern Show debut Wednesday afternoon, rock legend and Rolling Stones frontman Mick Jagger said it was actually the drummer himself who insisted the show go on without him.

“When he was sick, he said, ‘You’ve gotta just carry on and do this tour. Don’t stop because of me,’” Mick told Howard. “So we did.”

Watts was an integral part of the band for nearly 60 years and his affect on the Rolling Stones’ music and trajectory is nearly impossible to overstate. As Jagger pointed out, he did far more than just keep a steady beat on stage. Charlie also steadied his bandmates when the lights were off and the show was over.

“Charlie was the heartbeat for the band, you know, and also a very steady personality,” Mick said. “He was a very reliable person, wasn’t a diva—that’s the last thing you want in a drummer.”

In addition to possessing an incredible skillset as both a jazz and a rock drummer, Watts was a “wonderful guy to play with,” according to Jagger. “I missed Charlie because he had a great sense of humor,” he told Howard, explaining they two had many similar interests outside of the band, including a passion for soccer and cricket. 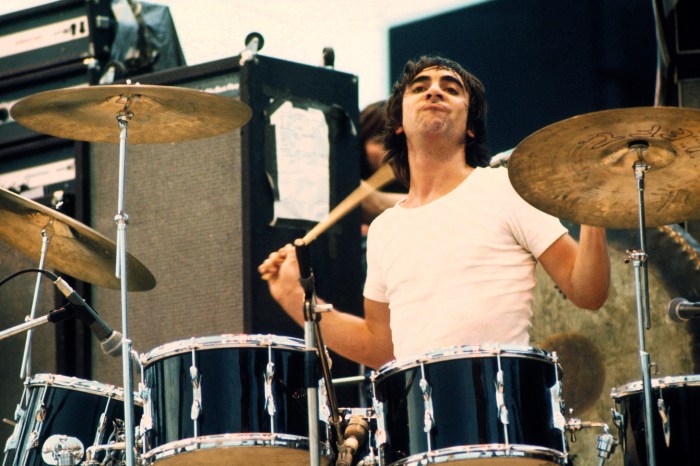 Howard and Mick at one point tried imagining how differently the Rolling Stones’ might’ve sounded (and acted) had they gone with a drummer who lacked Watts’ calming presence.

“You ever sit and look at a band like Led Zeppelin and think … ‘Gee, I wonder what it would’ve been like if John Bonham was the drummer?’” Howard asked.

“Louder,” Mick laughed without hesitation. “John was a complete lunatic like [the Who’s] Keith Moon.”

Sharing the story in public for perhaps the first time, Jagger then told Howard all about the time Moon broke into his Los Angeles hotel room while dressed like Batman. “I woke up and there’s Batman in front of me, complete with a mask and everything,” Mick said.

He recalled keeping something for self-defense in the room—perhaps a knife—which he brandished against the Caped Crusader. That caused the Who drummer to quickly break character. “He said, ‘No, it’s Keith! It’s Keith!’” Jagger laughed.

Howard wondered how Moon even got into the vaunted frontman’s hotel room in the first place.

“He came up the fire escape,” Jagger laughed. “[He was] a nutcase.”

Can’t You Hear Them Writing 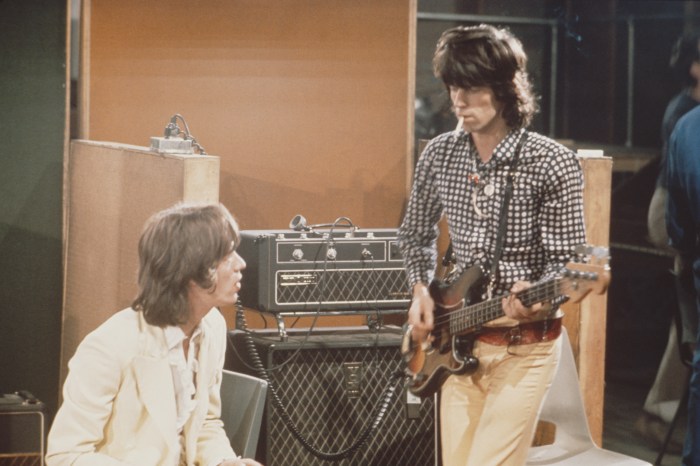 Mick and his grade school classmate turned Rolling Stone bandmate Keith Richards are responsible for more hits than most big-league ball players, and at one point on Wednesday Howard fittingly compared Jagger to baseball legend Babe Ruth. Mick and Keith share writing credit on the majority of the band’s biggest hits, so Howard was curious to learn more about their collaborative process.

“A lot of people think Keith is the guy who writes all the music and you write all the words, but it’s not like that,” Howard said.

“At the very, very beginning it was like that,” the Grammy-winning Rock and Roll Hall of Famer responded. “Keith would write the melody or the chords of a song … but then later on we’d do both.”

Mick told Howard that songwriting, for him, is a two-part process. First he comes up with a single riff, lyric, or melody. Next, he crafts a complete tune.

Howard was curious how Mick cultivated his initial bits of inspiration.

Jagger said it was less about what he was doing and more about his frame of mind. “It’s your state of mind being relaxed,” he said. 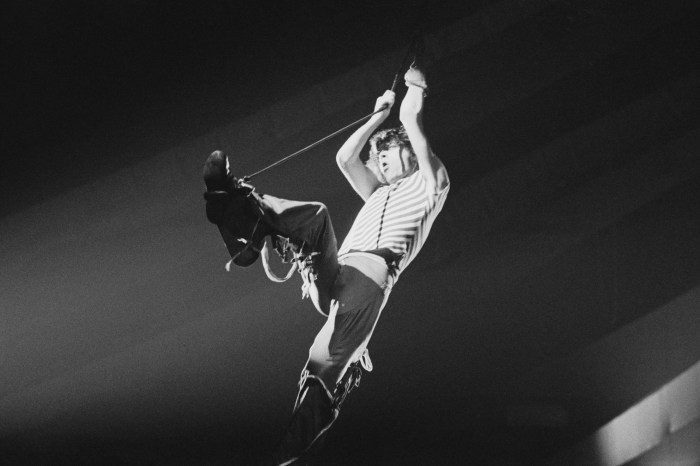 A brilliantly written song catalogue is only one of the reasons why the Rolling Stones, nearly 60 years after their inception, remain one of the industry’s most successful touring acts. The band also puts on one hell of a live show.

Mick, in particular, is renowned not just for his world-class crooning but also his enthralling moves on stage. As he explained to Howard, dancing is one of the things separating the Rolling Stones from one of their most famous contemporaries: the Beatles.

“[The Beatles] made this decision that they weren’t going to dance on stage. They did move a bit … but they didn’t dance,” Jagger said, explaining he’d once read the Fab Four insisted on differentiating themselves from hip-shaking superstar Elvis Presley.

But for Mick staying put was never an option. “As far as I’m concerned, I just couldn’t keep still. It wasn’t a question of making a decision to dance. I couldn’t have this music going on and not move around, you know?” he told Howard.

“If you’re a lead singer in a band, you have to be an extrovert … and being an extrovert means doing all these stupid things,” he continued, explaining that in the early days he copied moves off trailblazing musicians like James Brown, Chuck Berry, Little Richard, and Jerry Lee Lewis. “They had signature moves,” he said. “It’s not enough to just be a singer. You have to have moves.”

Jagger has perfected his showmanship over the decades, learning precisely when to swivel, when to gyrate, and when to slow things down and let the song take centerstage. “You don’t want to be a chicken with its head cut off all the time because that’s just too annoying,” he laughed.

More recently, Mick has also learned to keep himself out of harm’s way. “When I was much younger I … just did crazy things,” he told Howard. “I used to jump off the stage into the organ pit in these theaters [and land] on my knees, and my knees would be killing me … but I’d seen Little Richard do that and I thought, ‘Okay, I could do that.’”

“I’d do absolutely crazy things I didn’t rehearse and some of them were dangerous. Even later on in the ‘80s, I’d climb up these 60-foot-high stages and go on top of them. But it’s fun. To me, that’s part of performing,” he continued. “Listen, I’m a musician and I’m quite serious about music, but when you’re actually performing there’s another whole added element to it.”

A student at the prestigious London School of Economics where he shined academically, it was a controversial move when Mick told his father – a physical education teacher and lecturer—that he was leaving it all behind to be in a rock band. “People that were in this kind of music business were in a very short-lived business, they maybe did it for a year, maybe they had one record or if they were lucky, they had a couple – it wasn’t a career path,” the singer explained to Howard of the industry back then. “My parents really never saw that I was really into being into some kind of show business … they never really saw that in me even though I was obviously a very outward going and extroverted child, but they never really saw that and they wanted to keep me in an academic world.”

His performing days dating all the way back to the age of 12, committing to music fulltime was an easy decision for Mick, who was moved by sound advice within his academic circles. “I went to see my tutor in college, and he said, ‘Well, you know, it’s not a big deal. If it doesn’t work out for you, you can always just come back to college,’” he recalled before noting the elder Jagger’s initial reaction. “I think my father, yeah, was obviously very upset about it, but then very quickly we became successful and quite well-known, so I think he was depressed for a year but after that he saw that it was something that was happening.”

Not only did Mick’s parents get to see his success but they wound up being supportive – perhaps too supportive. “I didn’t used to like them coming to shows very much,” he admitted with a laugh. “It’s inhibiting because I used to do all kinds of crazy things and some of them overtly sexual and I never really liked doing that stuff in front of my parents.” 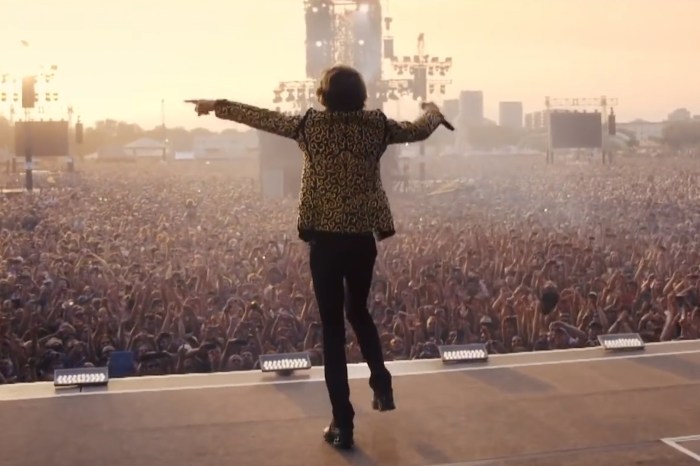 Even with moves like Jagger’s, it takes a lot of work to get ready for a tour. As Mick explained, even before the band starts rehearsing, he puts in a tremendous amount of preparation. “I have to [practice] voice for a certain time, gym for a certain time, upper body for a certain time, little bit of sprinting,” he revealed before discussing his favorite part—the dancing. “I always say to my trainer, ‘We need more dancing,’ so that’s much more fun to go into like a dance studio and play around, fool around, and try things out.”

As a bonus, the effort does keep him in top shape. “It’s also a way of getting fit,” Jagger noted. “If you dance for 45 minutes, that will wear you out.”

His workload may seem like a lot, but each band member has his own unique set of responsibilities. “Everyone in the band has their own things they have to specialize in, and I have to do certain things and other people have to do other things,” Jagger said. “You’re putting out a lot of energy if you’re playing drums … if they make a mistake, they can’t stop … you’ve got to keep going even if your legs killing you. You’ve got to keep going because if you miss a beat everyone’s going to look at you.”

Once the band gets to the rehearsal stage, they have a tremendous catalog of songs to choose from—all of which Mick knows to a point. “You don’t know them backwards, but you do know them,” he said of the material, boasting he knows at least two lines of every Rolling Stones song ever recorded. “There’s [about 30 songs] we know really well … and then there’s another 50 that we know sort of half.”

As far as the contents of each setlist, that depends on the audience. “If you’re playing in a small club or theater, you can play more or less anything you’d like,” Mick revealed. “Most people come to a stadium; they want to hear songs that they’re very familiar with … Most of the time, they want to hear things they know.”

Mick Jagger and the Rolling Stones are on tour now. Get No Filter tour dates and ticket information here.