“I just love the sound of your voice and your laughter and bringing us joy when we need it,” frontman tells Howard’s co-host from the stage 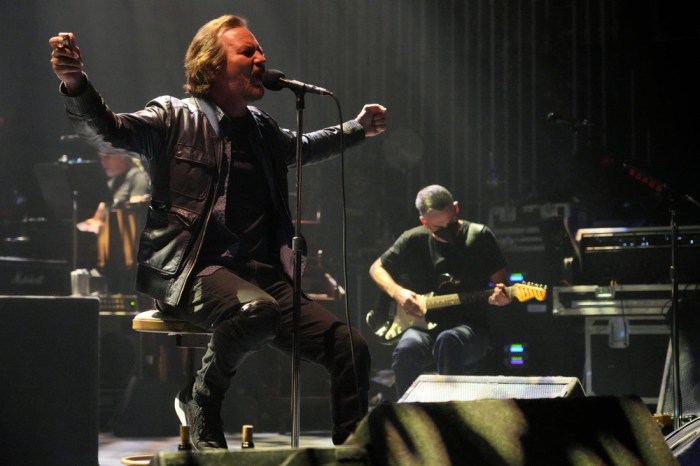 When Rock & Roll Hall of Famers Pearl Jam rocked New York City’s legendary Apollo Theater this past weekend as part of SiriusXM’s Small Stages series it was met with rave reviews, including from the Stern Show’s own Robin Quivers. “I woke up the next morning and I said we were all so lucky to be there, that was really amazing,” Howard’s longtime co-host, who sat just four rows back, reported Monday morning. “What a band … Man, do they jam out. It’s a good name for them, Pearl Jam.”

Evidently the feeling was mutual, as lead singer Eddie Vedder took time in between songs to praise Robin. “I got to meet [her] tonight for the first time and I’ve been in love with her voice for so many years,” he said from the stage. “Robin, I just live to hear you laugh … I just love the sound of your voice and your laughter and bringing us joy when we need it … love you, Robin.”

“I thought he was singing to me,” Robin said of Eddie’s performance overall. “I was like, ‘Am I losing it or is he just looking at me and giving the show?’”

“If you’re going to go out and get COVID, what a way to get it,” Howard joked after noting he saw a picture of his co-host maskless with Vedder.

For those who did not make the concert in person tune into a special airing on Howard 101 on Friday, September 16 at 5 p.m. ET.