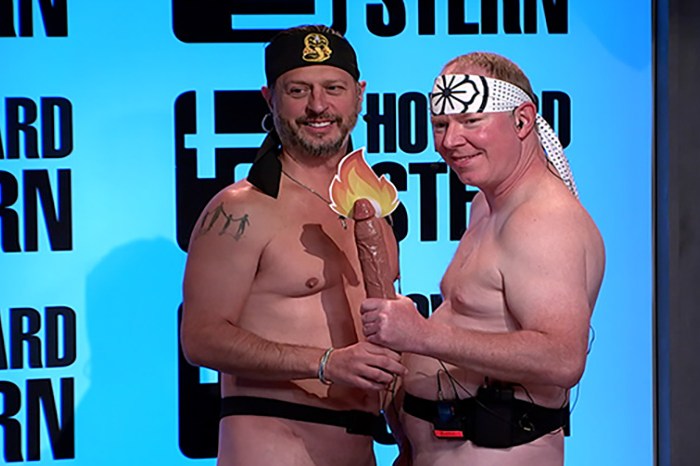 Extending into “Cockvember” this year, Cocktober concluded Wednesday morning with Stern Show staffers and penis trick veterans Sal Governale and Richard Christy battling against each other in a Dick-Athlon. Competing in three events under the supervision of referee Memet Walker — Penis Fishing, Taekwondong, and Pole-in-One — the contest was the ultimate test of penial strength, endurance, and ability. 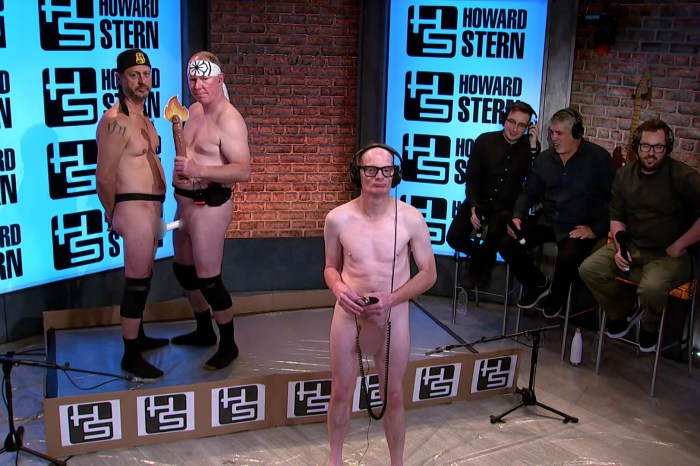 Nude Wack Packer Medicated Pete kicked off the opening ceremonies by singing “Purple Vein” into the microphone attached to his penis, but not before the two “cockthletes” engaged in some healthy trash talk. “It’s quite obvious who the winner is … I have the advantage with my cock,” Sal boasted before talking directly to his opponent. “I’m taking you down.”

“You’re going down, you meaty-dicked weirdo,” Richard countered. “Choke on my dick.” 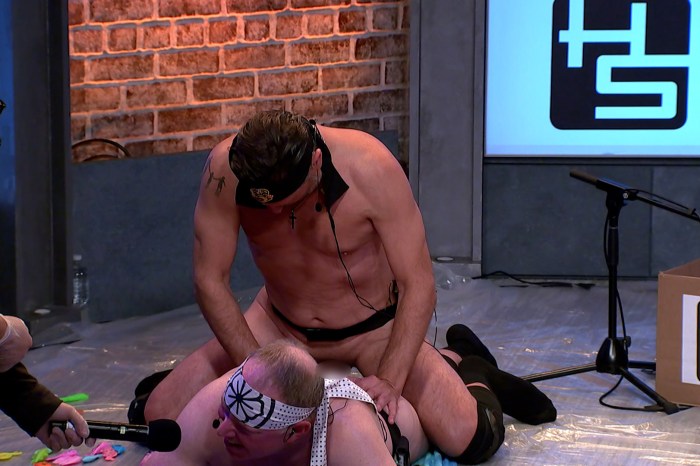 The first Dick-Athlon event was Penis Fishing, which saw Richard and Sal strap magnets to their manhood and take turns plucking metal fish from each other’s ass cracks. “Richard is laying on a beach towel, naked. He’s on his belly. Sticking out of his ass are magnetized fish,” Howard said, setting the scene for his listeners.

“It tickles, too,” Richard added.

Sal hovered over him, wearing just a condom and a magnet. Their colleague Chris Wilding couldn’t believe what he was seeing. “This is unequivocally the gayest thing I’ve ever been a part of in my life,” he said. “I fuck men, and this is crazy.”

The angling commenced with grunting and shouting galore. In the end, Sal caught five magnetized fish in 60 seconds. “My thighs are numb,” Sal said after hauling in his catch.

“This is absolutely wrong,” co-host Robin Quivers noted as Sal laid down and Richard readied his own pole. Richard was grossed out by specks of toilet paper peppering Sal’s backside, but it didn’t stop him from thrusting as hard as he could to reel in as many fish as possible. Despite a vigorous effort, Richard caught only four. 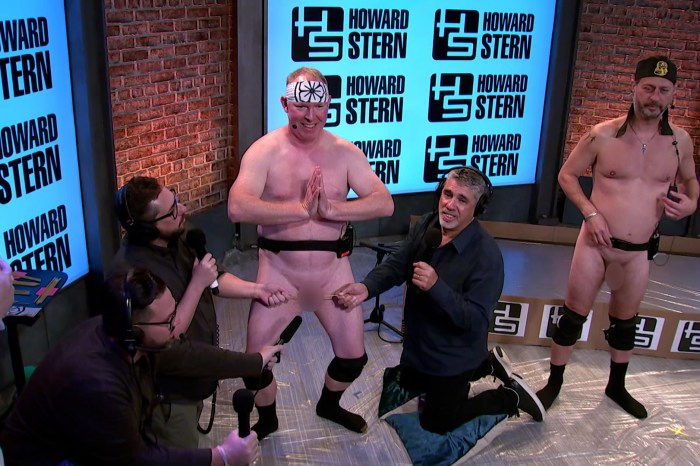 Next up was Taekwondong, where the competitors, using only their penises, had to attempt to break through strands of uncooked spaghetti being held by executive producer Gary Dell’Abate and colleague JD Harmeyer.

Though Richard and Sal initially were tied up with two broken pieces of spaghetti, Sal took the event when he successfully broke another four with one swift chop.

“I didn’t realize how much extra it gives Sal,” Robin agreed of the advantage.

Gary Dell’Abate was more concerned with his part in the event as a spotter. “I literally had like fucking pubes in my hands,” he recalled. “It was super weird.” 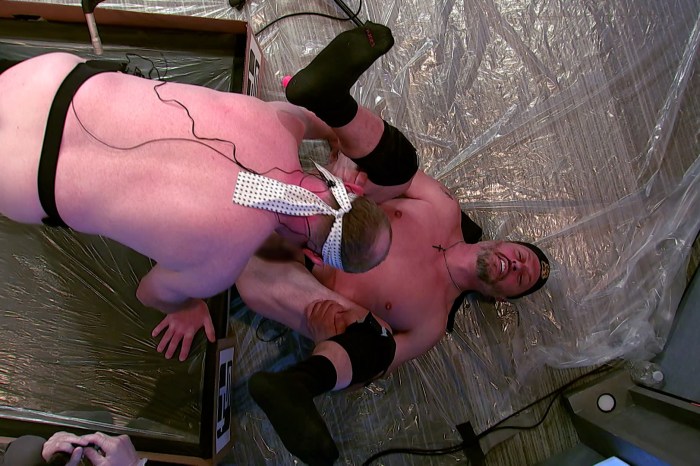 Richard channels “Tiger Wood” during his round of Pole-in-One Photo: The Howard Stern Show

The morning’s final Dick-Athlon event was Pole-in-One, which had the contestants use their penises like putters and knock a golf ball into the other man’s backside.

After “warming up” his club, Sal went to work. With a hard grunt, he hit the ball close to the “hole” with his first shot. But his next one was a swing and miss. Howard wondered what went wrong.

“[His club] is just a little too short to reach the ball,” Memet explained.

Sal eventually knocked the ball into Richard with his fourth stroke, but was the performance bad enough to give his longtime colleague his first win of the morning?

“I’m going to swing my dick and hit this golf ball,” Richard vowed as he teed off and put the ball just two inches away from glory. “Call me Tiger Woods,” he added as he sank the putt with shot number two.

“Finally, Richard is on the board,” Robin exclaimed.

“I’m getting too old for this shit,” Sal told listeners as the Dick-Athlon came to an end. “This has been an honor,” he added. “I can’t think everybody enough.”

“If I’m going to lose to anybody, it’s an honor to lose to Sal,” Richard agreed before hugging his colleague. 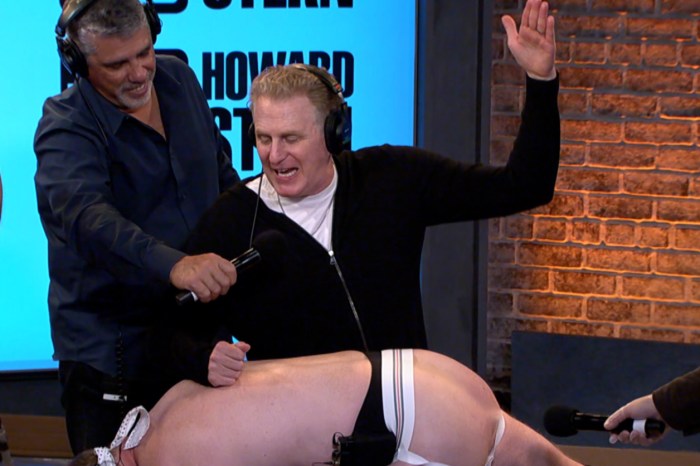 Before wrapping things up, Richard had one more beating to endure — the spanking he volunteered to get from actor and Emotional Friends Fantasy Football League commissioner Michael Rapaport for violating an Injured Reserve rule.

“This is a bizarre kind of fantasy football league,” Howard remarked. “I don’t think there’s another one in the country where they’ve got the commissioner … spanking … one of the nude members.”

“I’ve never spanked a nude man before, but I’ve been prepping and I’ve been working on my stroke,” Michael, with a naked Richard Christy across his lap, revealed. “I told you when I was becoming commissioner that I was running this league with an ironclad fist.”

As Michael’s hand made impact with Richard’s bare bottom, the staffer obediently repeated back prompts from the league commissioner. “Thank you, Daddy, I will take another,” he said. “I’m going to follow the rules, sir … I’m going to be a good fucking hillbilly … I promise not to abuse the IR.”

Once finished and sporting a reddened posterior, Richard appeared to take something away from the experience. “I’m scared to use the IR spot now,” he insisted. “He did it hard enough where I learned my lesson.” 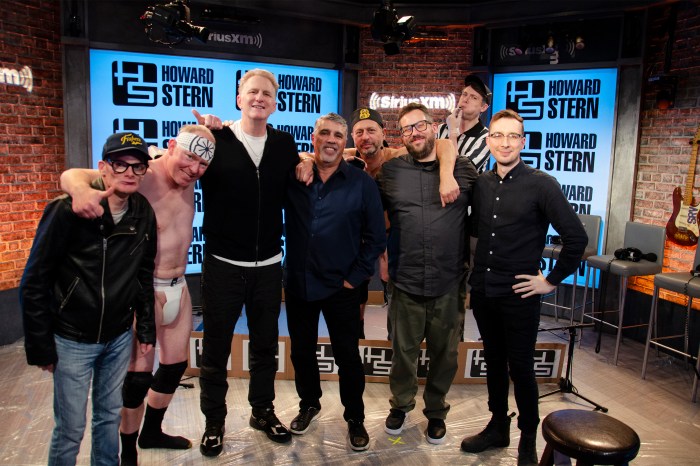