Robin Quivers Rides in a Rickshaw, Crawls Through Bat Caves, and Gives Rice to Monks During Her Holiday Trip to Southeast Asia

Robin Quivers Rides in a Rickshaw, Crawls Through Bat Caves, and Gives Rice to Monks During Her Holiday Trip to Southeast Asia

“I tried to talk Robin out of it,” Howard recalls of his co-host’s four-country vacation 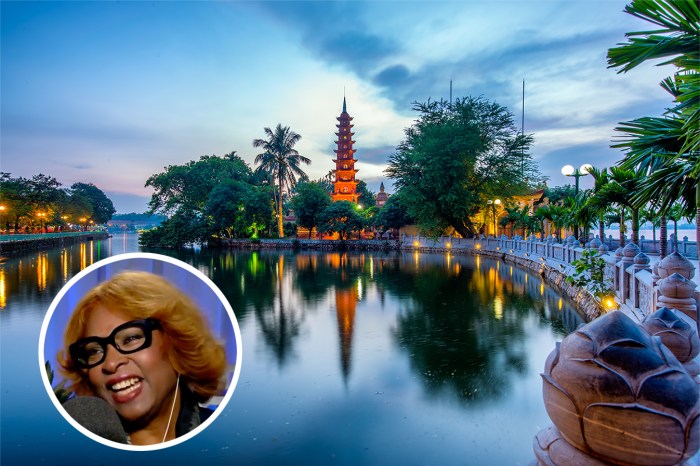 After multiple years of laying low and playing it safe during the pandemic, Stern Show co-host and legendary international trip taker Robin Quivers traveled to Southeast Asia over the break for what she felt was a well-earned vacation.

“I tried to talk Robin out of it,” Howard laughed on Tuesday morning, adding, “[Robin told me, ‘I’m going to explore the bat caves of Asia with a shaman,’ and I was like, ‘Oy vey, here we go again.’”

As Robin recalled it, Howard had a far funnier reaction after she told him she intended to visit Laos, Cambodia, Vietnam, and Thailand. “I named the four places, and you just went ‘nooooo!’” she said. “You just started screaming. It was the longest ‘no’ I ever heard.”

Howard admitted he was concerned his longtime co-host might contract COVID while traveling, but Robin said the only thing she caught was a good time. “They have a higher vaccination rate than we do, and they’re mask friendly,” she explained, adding, “I was so stressed out at the end of the year and the three years of isolation that I said to myself … ‘I need to go somewhere that is completely unfamiliar,’ … and that was fantastic just to see all new things.”

Detailing her adventures, Robin said she saw endangered bears, fed a monkey, crawled through a cave with bats, gave rice to monks, was pulled around in a rickshaw by a tiny man, and visited the infamous Hanoi Hilton where the late John McCain was held captive for over five years.

Ms. Ophelia also twice partook in a blessing ceremony where locals tied strings around her wrists in the hopes of bringing her good fortune. “The first [strings] I lost because I was like, ‘I gotta take a shower. I can’t keep this stupid thing on my wrist,’” she said.

Howard, meanwhile, remained stunned by how abruptly Robin had gone from social distancing to jetsetting across the globe. “[You] went from zero to 195 miles per hour in a second. You went berserk,” he told her with a laugh, later adding, “I’m glad you’re back in one piece.”