All Rise for the Special People’s Court

Everything you need to know about the High Pitch v. Elephant Boy case 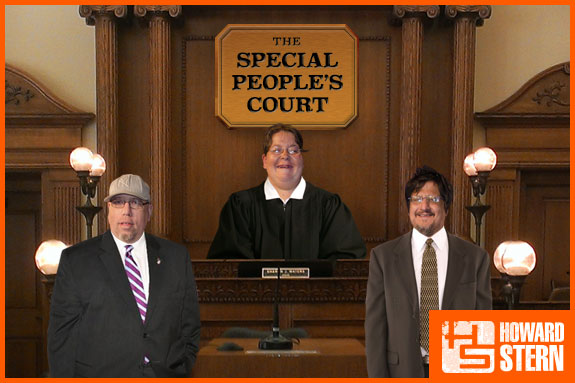 The stupidity you are about to hear is real.

On Wednesday morning, High Pitch Erik and Fred the Elephant Boy will stand before Judge Wendy the Slow Adult to plead their cases in… the Special People’s Court. The trial follows the arrest of High Pitch, who was formally charged by police for threatening to kill Fred. Before opening arguments get underway and Wendy serves her special brand of justice, let’s take a look back at everything that has happened thus far in the case of High Pitch v. Elephant Boy:

– Erik is booked and charged with aggravated harassment. According to Jon Leiberman, the cops who take High Pitch in are also fans of the Stern Show and only hold him for about an hour. “They actually drove High Pitch home after they processed him and let him out on his own recognizance,” Leiberman tells Howard.

– Fred the Elephant Boy publishes an account of the alleged threats he received from Erik on Twitter: 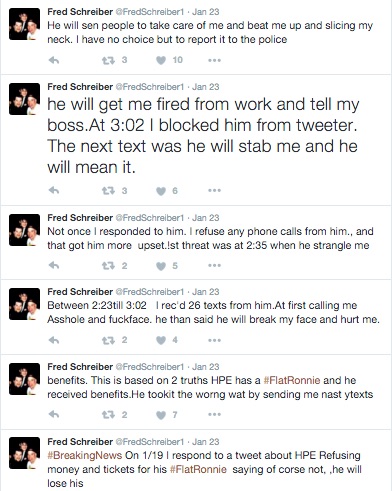 Fred the Elephant Boy went public with his side of the story soon after High Pitch Erik’s arrest Photo: Twitter

– Howard discusses High Pitch Erik’s arrest for the first time on-air. After learning that he was accused of threatening to kill Fred the Elephant Boy, Robin asks, “He’s sitting in a walker – who can he really threaten?”

– High Pitch Erik calls into the Stern Show to defend his actions. “[Elephant Boy] turned his back on me,” Erik explains. “A few weeks ago, he tweeted at Stern Show and said ‘let’s take his disability benefits away.’ That upset me so much.”

– Erik owns up to threatening Fred the Elephant Boy, but insists there was no violence in his heart. “I said you’re a dead motherfucker,” Erik admits. “But do I really want him dead? No.”

– The conflict between High Pitch and Fred escalates on Twitter, with both Wack Packers taking to their social media accounts to share their disdain for each other.

– Howard plays audio from Joey Boots‘ podcast on the Stern Show in which Joey interviews High Pitch Erik and Gonzo Shitcock about Fred the Elephant Boy’s accusations. During the interview, Erik requests that Gonzo contact Fred on his behalf. “It’s easier to teach my cats how to use a litter box than it is to teach Erik how not to threaten people,” Howard tells Robin while listening to the tape.

– Wendy the Slow Adult will presided over High Pitch Erik v. Fred the Elephant Boy in the Special People’s Court. Her ruling is final! … Until High Pitch goes to court for real in March.

-To check out all of the highlights from the Special People’s Court (High Pitch v. Elephant Boy), CLICK HERE.