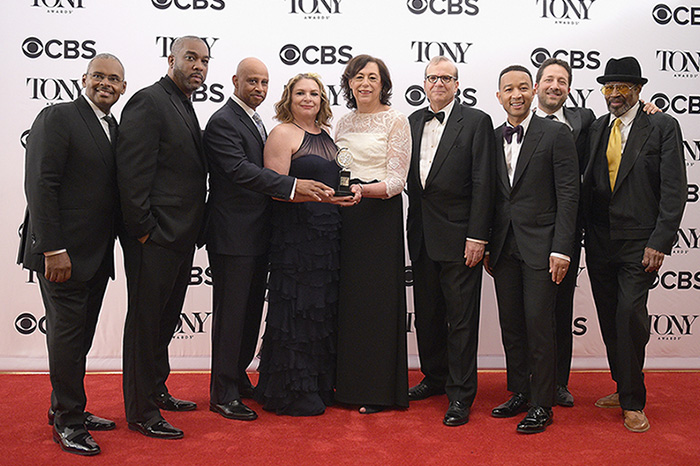 The crew of ‘Jitney’, winner of the award for Best Revival of a Play, poses in the press room during the 2017 Tony Awards. Photo: Getty Images

John Legend won his first Tony Award on Sunday night and now the multi-talented performer is merely an Emmy shy of the coveted “EGOT” distinction, reserved for those distinguished few who have won all four major entertainment awards.

The actor, producer, music icon, and 2013 Stern Show guest won a Best Revival Tony for his efforts co-producing this season’s run of August Wilson’s “Jitney” on Broadway. Previously, John won an Oscar in 2015 for his and Common’s song “Glory,” off the “Selma” soundtrack. He has also nabbed 10 Grammys over his career, winning his first three in 2006, including for Best New Artist.

Emmy voting, meanwhile, kicked off Monday and John finds himself eligible in several categories for his work on WGN America’s “Underground,” where he guest starred as the renowned abolitionist Frederick Douglass and also wrote and performed the original song “In America.” This year’s nominees for television’s most prestigious awards show will be announced July 13.

John’s wife Chrissy Teigen took to social media shortly after his Tony win, pointing out how close her husband was to making history. Check out her tweet below: