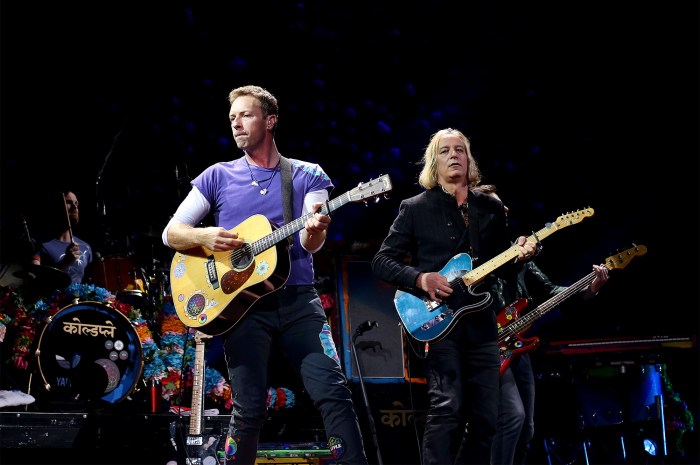 Coldplay honored Tom Petty during a Monday night concert at Moda Center in Portland, Ore., by bringing Peter Buck of R.E.M. on stage to help cover “Free Fallin’,” one of the recently deceased rock legend’s most iconic songs.

Coldplay frontman and repeat Stern Show guest Chris Martin sang vocals and played guitar on the cover while Buck and the band backed him up, but eventually Martin handed the reins over to the concertgoers so they could sing the last few choruses of the song themselves. Watch the heartfelt tribute (below).

Following the minute of silence, Peter Buck joined the band for this wonderful rendition of Freefalling by Tom Petty.
R42 pic.twitter.com/KzRMHYGKwS

The classic cover came early in the show, just after the band held a minute of silence to honor the victims of Sunday’s mass shooting in Las Vegas, which as of Tuesday has left 59 dead and over 500 injured.

“When words fail, sometimes quiet is the most eloquent,” the band explained in a tweet.

This evening’s Portland show began with a minute’s silence. The entire arena lit only by people’s phones.
When words fail, sometimes quiet is the most eloquent.
R42 pic.twitter.com/HvrbO8l56y

Colplay and Buck aren’t the only ones who have already paid tribute to Petty, who died Monday evening at the age of 66 after suffering cardiac arrest at his home in Malibu, Calif. A multitude of entertainers and celebrities, including Sheryl Crow, Reba McEntire, John Mayer, Rob Lowe, Miley Cyrus, and Adam Sandler—to name just a few—have also expressed condolences via social media and paid homage to him onstage.

On Tuesday’s Stern Show, Howard and Fred Norris both shared kind words and stories of the late Rock and Roll Hall of Famer and Heartbreakers frontman. Howard recalled seeing Petty perform at a private birthday party and he also played “Free Fallin’” on air, commenting “it was probably one of my favorites.”

Click here for more on the life and storied career of Tom Petty.