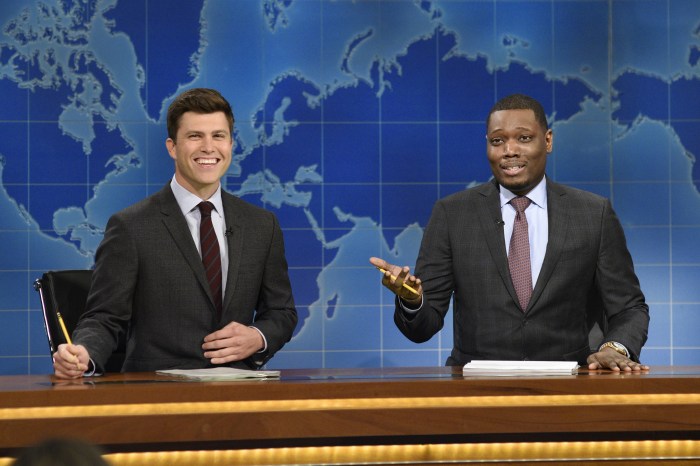 The most heavily-nominated series in the history of the Emmys is about to take over TV’s most prestigious award show in a whole new way.

“Saturday Night Live: Weekend Update” anchors Michael Che and Colin Jost will host the 2018 Primetime Emmys, NBC revealed Thursday. The news-skewering comedy duo will be the Emmys first hosts from “SNL” since Eddie Murphy emceed the event back in 1983, according to Hollywood Reporter.

“NBC is thrilled to be the home of this year’s Emmy Awards and with Colin and Michael in the driver’s seat as hosts, along with surprise appearances by other cast members of ‘Saturday Night Live,’ I think we are in for one of the funniest awards shows in a long time,” said NBC Entertainment Robert Greenblatt, whose network last summer also ordered four standalone episodes of “Weekend Update” to air while “Saturday Night Live” was on hiatus.

“We’re proud to be the first duo hosting the Emmys since Jenna Elfman and David Hyde Pierce, and somehow that’s a real fact,” Che and Jost added in a statement of their own.

The upcoming Emmy hosts will follow in the footsteps of recent Stern Show guest Stephen Colbert, who presided over last year’s broadcast which incidentally saw “SNL” take home multiple awards. When Colbert sat down with Howard in February, the late-night star opened up about a variety of topics, including his 2017 hosting gig which made headlines after an unexpected cameo from former White House Press Secretary Sean Spicer.

Listen to a clip from Stephen’s sit-down with Howard (below).

The 70th Primetime Emmy Awards, produced by “SNL” creator Lorne Michaels, will be broadcast Monday, Sept. 17 on NBC from the Microsoft Theater in Downtown Los Angeles. Nominations will be announced Thursday, July 12.