Stephen Colbert on Leading in Late-Night, Drinking With Jennifer Lawrence, and Why He Stands by Having Sean Spicer on the Emmys

Stephen Colbert on Leading in Late-Night, Drinking With Jennifer Lawrence, and Why He Stands by Having Sean Spicer on the Emmys

“They hired me with the expectation that I would do well,” the TV funnyman says of taking ”The Late Show” to No. 1 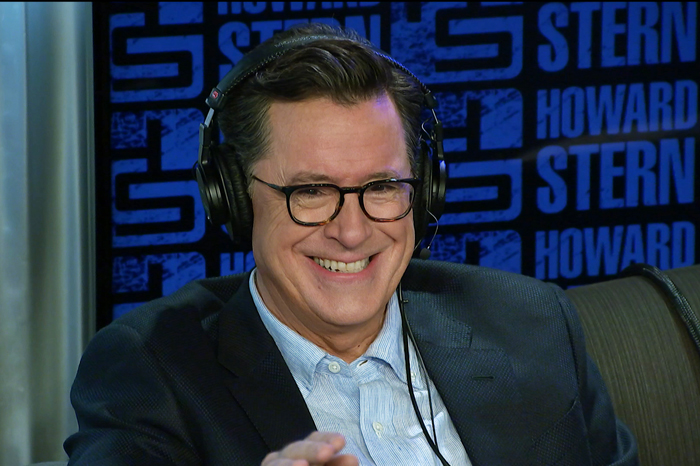 Battling for the lead in late-night television isn’t exactly an easy topic for Stephen Colbert to talk about, but now that he and “The Late Show” have captured the biggest audience in their time slot, the TV funnyman sure would like to keep it that way. He returned to the Stern Show on Tuesday and told Howard what it’s like to be No. 1 while still admiring his competitors Jimmy Fallon and Jimmy Kimmel.

“I don’t want to beat anybody, honest to God,” Stephen said. “I don’t like reading any shit about the other guys because I know what it’s like to have that shit written about you and I respect those cats.”

But attempting to reach the top spot is an inescapable objective for a late-night host. “I feel a gratitude to CBS and … it would be ungrateful not to try,” Stephen explained. “And so to be in the hunt is fantastic. To be winning on a weekly basis? Well, that’s just wonderful.”

The network is no doubt thrilled to have “The Late Show” winning in the ratings but Colbert told Howard not much changed once they secured the No. 1 position, other than weekly celebratory pizza for his staff. “[CBS was] happy but, no, no one’s like, rolling up with a Bentley for me,” Colbert said. “Because they hired me with the expectation that I would do well. So, I’m fulfilling my contract in a way.”

Millions tune in to see what Colbert’s take is on that day’s news which rarely doesn’t include the topic du jour on President Donald Trump. But does Stephen think the Commander in Chief is watching from the White House?

“Because we became the No. 1 show, I can imagine he might have watched then because he respects success. He respects ratings,” Colbert said.

Trump winning on election night tends to be cited as the start of Stephen and “The Late Show’s” ratings success, but Colbert explained it wasn’t Trump himself who changed things as much as everything that happened leading up to him becoming president.

“That election was the gift,” Stephen said. “We did like 15 live shows and those live shows actually really made us get on our game because, well, there’s no second chop at anything and that allowed us to approach every show like it was live.”

Upping the pace proved to be a must in this current political news cycle, especially with Stephen’s nightly monologue. “Sometimes it changes last minute now,” Colbert told Howard. “We’ve thrown out entire monologues at 4:30 before and we go on at 5.”

Another crucial change that became clear after Stephen started at “The Late Show” was that he needed a new showrunner … preferably one who wasn’t him. “I didn’t have a showrunner. I was the showrunner,” Colbert said, admitting that the demanding scheduled proved too much for him.

“I’d wake up in the middle of the night and realize I was having a meeting in my head about tomorrow’s show and it wasn’t a dream … I was thinking about tomorrow’s show and I went, ‘This is not good,’” Stephen recalled. CBS didn’t have to search very far to find the right candidate to take over day-to-day production responsibilities — they tapped former “CBS This Morning” showrunner Chris Licht to step in and help Stephen. According to Colbert, Chris’s presence has made all the difference. Now that he can focus solely on being funny on national TV, Stephen has found some much-needed peace and even has time for an office nap from time to time.

“I got a long, wide couch just for this purpose,” Stephen told Howard.

The only other man to host “The Late Show” before Colbert was of course late-night icon David Letterman, who Stephen remains friendly with. Before his first night as the new host, Stephen was trying to decide where he wanted to stand to deliver his monologue. He noticed a subtle red spot on the ground — the mark Dave used to use for his own nightly monologues.

“I was standing on that spot and I went ‘Oh, of course this is where you’d want to stand. Of course, he’s no dummy,’” Colbert said of Letterman. That sweet spot is situated close enough to the audience in the front row but far back enough to still be able to play to those sitting in the balcony. Colbert decided to save that floor piece and frame it for safekeeping. He had it in his office for a while and no one who came by ever realized what it was. After a while, Stephen realized the floor tile didn’t belong in his office, it belonged in Dave’s. He sent him the gift along with a note which read: “People don’t know what this is when they walk into my office — I think you might.”

“It was hard to part with because that’s television history,” Colbert told Howard.

Now that he’s No. 1 in late-night, Howard wondered who Colbert’s best guests have been so far. It’s hard to choose just one for Stephen, but he offered a few names who have left a lasting impression: astrophysicist Neil deGrasse Tyson for his enthusiasm, Joe Biden for his willingness to talk about grief, and Steve Martin since he was whom Stephen tried to emulate as a young, up-and-coming comedian.

Just this week, Stephen had on actress Jennifer Lawrence who always offers an “energy the audience will appreciate” whenever she comes on. Last night, though, it was clear Jennifer needed something to take the edge off so she and Stephen enjoyed a few cocktails together during their interview. Howard asked if Stephen actually got drunk.

“Hammered! Oh, I’m a lightweight,” Stephen said, adding they didn’t show all of the drinks they’d consumed together. “And I also gave up liquor for Lent and so it’s been two weeks since I’ve had a cocktail.”

A stiff drink is something Stephen regularly enjoys after a long day at the studio. “When I come home, my mind is still going at a thousand miles an hour and I need something to punch my brain in its face, to stop it,” he told Howard. While he and Lawrence were doing shots of high-end rum on “The Late Show” he prefers an old-fashioned in the winter or a gin and tonic when the weather is warmer. And though he’s not a weed guy, per se, he admitted he’s taken an edible in the past to help him fall asleep.

“Only in states where it’s legal, Howard,” Stephen said with a laugh.

It’s not just “The Late Show” that Stephen’s been hosting lately. In 2017, Colbert hosted the Emmy Awards for the first time which included one moment during his opening monologue that left a few with a sour taste in their mouthes. After some skewering of President Trump, Colbert had former White House Press Secretary Sean Spicer walk out on stage. Not everyone present that night was laughing. Howard wondered if Stephen had any regrets for having the Trump staffer be a part of the ceremony.

Catch Stephen Colbert on “The Late Show” weeknights at 11:35 p.m. ET on CBS and watch his new show “Our Cartoon President” Sundays at 8 p.m. ET on Showtime.