Legendary actress and activist Jane Fonda returned to the Stern Show on Wednesday and joined Howard for a deeply personal yet universally relatable conversation touching upon everything from partying with Marilyn Monroe and lusting after Marvin Gaye to the looming threat of climate disaster and life’s never-ending search for purpose. Indeed, the 82-year-old entertainer, author, and cultural icon was an open book, which is fitting considering she just published a mobilization manual of sorts called “What Can I Do? My Path from Climate Despair to Action.”

Fonda first got involved with activism while participating in the Civil Rights Movement and protesting America’s involvement in Vietnam. “When I became an activist … it was like stepping into joy. It was like sinking into a warm bath,” she told Howard on Wednesday. “I knew that I had a purpose in life and it gave me a reason to be. There’s nothing more beautiful in life than knowing why you were here.”

Over a half a century has passed, but Jane hasn’t lost any of her passion or tenacity. Nowadays, she stages protests in Washington called Fire Drill Fridays which raise awareness for the impending environmental crisis and hope to inspire meaningful action among politicians and ordinary citizens alike.

“The scientists, who are telling us all the terrible things that are happening … are also telling us, ‘We can make it. We can make the changes needed in time, but we have to start right now,’” she told Howard. “That’s why I went to D.C. and continue to do the Fire Drill Fridays and wrote the book—because we can make it.”

Restroom concerns aside, the idea just wasn’t feasible. “You’re not allowed to camp out anymore,” she said. “I would have gone to jail permanently.”

After consulting with environmental experts and activists like Greta Thunberg, Bill McKibben, Annie Leonard, and Naomi Klein, Jane realized she’d have better luck with a weekly event. “They all said, ‘Why not just do it every Friday? … Get the young people and do it all together and have that followed by civil disobedience and risking arrest,’” she recalled.

The risk of arrest was all too real, as it turned out. Jane and several other Fire Drill Friday activists—including celebrities like Ted Danson, Catherine Keener, Rosanna Arquette, and Sam Waterston—were all handcuffed and hauled off to jail while protesting.

Howard was impressed by her dedication to the cause. “It’s amazing to me that you still care so much,” he said.

“Howard, there were so many old women there,” she said. “Old women are leading this charge, believe me. I mean, what the hell do we have to lose? And woman tend to get much, much braver as they get older.”

At her advanced age, Jane told Howard death is frequently on her mind. “I think it’s important—especially if you’re old—to think about dying. Kind of like, ‘How do you want to go out?” she said. “I like to imagine that I’m in my deathbed and I’m surrounded by people I love. I want to be able to not have a lot of regrets. I want to feel okay with myself, like my life had some meaning.”

“If I wasn’t doing what I’m doing now, knowing what I know about the dangers we’re facing, I would arrive at the end of my life hating myself,” she continued, explaining she doesn’t want to end up like her father, actor Henry Fonda, who died with too many regrets.

Jane’s views on both the world and herself evolved considerably over the decades. Despite being a sex symbol most of her life, she told Howard there was a time when she’d look in the mirror and feel ugly. “If, when you were young, you were made to feel not good enough …  then no matter what the objective reality is you’re going to grow up feeling that’s true,” she said.

She wasn’t the only bombshell from that era with confidence issues, either. Jane attended Lee Strasberg’s Actors Studio alongside superstar Marilyn Monroe, who apparently had insecurities of her own.

“She was extremely insecure—way more than me—and she didn’t have my resilience, unfortunately,” she told Howard.

“She would sit next to me and she would be shaking a little bit,” Jane continued. “She was so nervous, she never did do a scene in the class. She was too scared.”

The two became friendly. “She would come to me to talk. There was one party … She came late and when she walked in I noticed there were men that started to, like, hyperventilate and kind of shake. She walked straight to me,” Jane recalled. “She felt a kinship, and she felt safe with me, and I was very touched by that.”

Another friendship Jane discussed Wednesday morning was the one she once enjoyed with actor Jon Voight, who starred alongside her in the 1978 anti-war film “Coming Home.”

“Are you in touch with him at all?” Howard wondered.

“No, not anymore. It’s very sad,” Jane responded. “I don’t know what happened to Jon. We were pretty close. He was my best friend among Hollywood people and we won Academy Awards together for ‘Coming Home.’ He was very, very involved with … the anti-war work we were doing and then he—I don’t know—he changed into an extreme right-winger, a Birther.”

“I just didn’t know how to connect with him anymore,” she added.

“Could you be friends with a guy like that now?” Howard asked.

“No, I couldn’t. Anybody that was part of the Birther movement—I’m sorry, I couldn’t,” she said. “I don’t understand how people who are on extreme opposite positions, politically, can live together. I just don’t know how they do that.”

“They must have really good sex,” Fonda suggested with a laugh.

“Can sex keep a couple together, Jane?” Howard wondered.

Jane didn’t shy away from conversations about her own relationships on Wednesday, including with director Roger Vadim, activist Tom Hayden, and media mogul Ted Turner. She also spoke of the attraction she felt toward legendary singer-songwriter Marvin Gaye as well as the King of All Media himself.

“I always found you wildly attractive and I couldn’t understand why you always put yourself down,” she told Howard at one point. “It made me mad.”

Sometime after her last Stern Show visit, Jane announced she’d sworn off dating for good. On Wednesday, Howard wondered if quarantine had forced her to reconsider her position.

“Are you lonely?” Howard wondered.

“I don’t get lonely. I don’t get bored,” Jane said, explaining her dance card stayed full with activism, philanthropy, research, and now even a book tour. If anything, she’s busier now than she was while her and Lily Tomlin were shooting the latest season of their hit Netflix series “Grace and Frankie.”

“I gotta go back to work soon, so I won’t be so busy!” she said with a laugh before revealing “Grace and Frankie” is scheduled to resume production on Season 7 early next year.

“We’re hoping by January things won’t be as bad, but they’ve set up some very, very formal protocols … in terms of masks and distance and how many people can come on the set and sterilizing things,” she told Howard. “We hope it’s going to work.

Still, Howard worried one of his lifelong idols was putting herself at risk. “You can’t get COVID!” he told her.

Jane Fonda’s “What Can I Do? My Path from Climate Despair to Action” is available now. 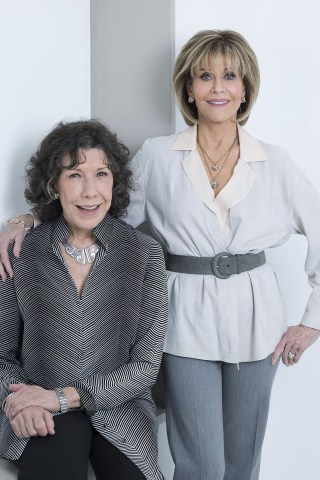 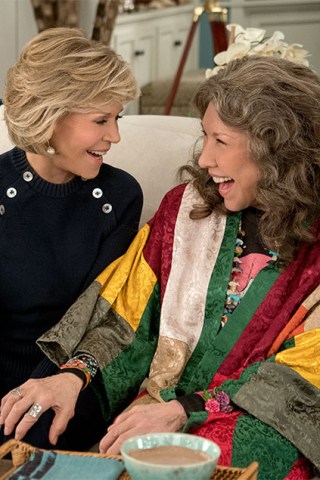 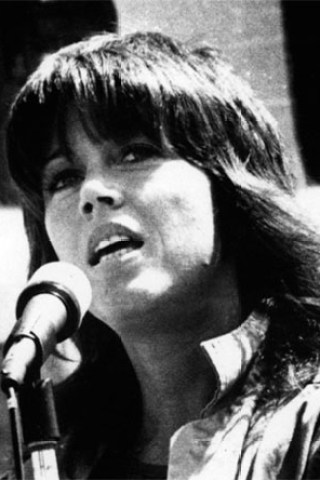 Jane Fonda Opens Up About Her Own Life in New Doc 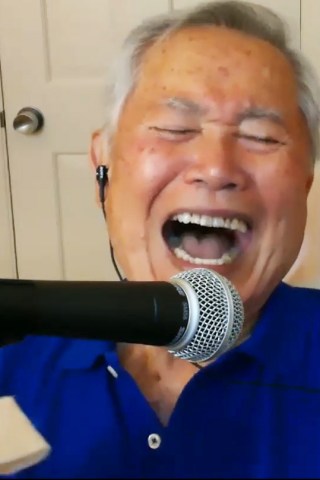