Wolfgang Van Halen joined Howard for a heartfelt conversation Monday morning, making his Stern Show debut just over a month after the tragic death of his father, rock icon Eddie Van Halen. It marked the first interview the 29-year-old musician and self-described introvert had given since Eddie’s passing and Wolfgang didn’t shy away from speaking candidly about his dad’s battle with cancer, their conversations during his final days, and the epic Van Halen reunion tour which sadly never materialized. He cleared up several rumors about Van Halen’s future and Eddie’s music archives, too, while also premiering “Distance,” an emotional tribute song Wolfgang had recorded as a farewell to his father, bandmate, and dear friend.

But first he opened up about how he’s coping with the loss.

“I’m awful. It’s terrible. Every day, man. Some days are better than others,” Wolfgang told Howard Monday morning. “The pain is still there always, but you just kind of figure out how to carry it a little better as time goes on. But it’s always gonna hurt.”

“Do you think you and your dad had such a close relationship because you had that musical bond?” Howard asked.

“That’s the gift and the curse of it,” Wolfgang responded. “We had such a close connection and now, for the rest of my life, there’s no way I’ll never be able to think about him no matter what I do—which is good but also hurts a lot.”

Wolfgang said his support group throughout these tumultuous times has consisted largely of his girlfriend Andrea, his uncle Patrick, and his mother—Emmy-winning actress and TV personality Valerie Bertinelli. “[They’ve] probably been the three pillars keeping me up. If I didn’t have them, gosh, I probably wouldn’t get out of bed,” he said.

While he hasn’t spoken directly with Van Halen legends David Lee Roth or Sammy Hagar since his father’s passing, he has stayed in close contact with his uncle, the band’s founding drummer Alex Van Halen.

“Al’s doing about as good as how you’d expect,” he responded. “We talk every day, just to check up on each other.”

Wolfgang told Howard that some days he talks to his dearly departed dad, too. “As this whole process has happened, I like to think I can still talk to him every now and again,” he said. “If I’m driving by myself I just kind of maybe imagine that I’m talking to him. Maybe it’s stupid, I don’t know, but it makes me feel better.”

“I can’t imagine what you’re going through,” Howard said. “My heart aches for you and I truly loved your father and the music he put out … He’s a pretty remarkable guy.”

“Yeah, there’s never going to be anybody like him again,” Wolfgang agreed.

Later, when Howard asked him whether Eddie was one of the greatest guitarists of all times, Wolfgang didn’t hold back. “In my opinion, between Hendrix and my dad, I don’t think there can or will be anyone … ever again that will have the impact that either of those two players had on the scene,” he said.

He also shared a treasure trove of childhood stories throughout the morning and in each of them his parents played a critical and supportive role. In one, his dad chaperoned his 8-year-old son at a Britney Spears concert.

“We sat down and all of a sudden two girls from my class sat next to us. I was like, ‘Oh fuck … I feel like a total loser right now,” Wolfgang recalled.

In another, his mom Valerie took him to see Van Halen in concert when he was only four. As he recalled it, he squirmed away from her backstage so he could run out onto the stage and be with his dad and the band.

While on the subject of Valerie, Howard wondered if Wolfgang’s mother ever compelled him to watch her famed late-1970s sitcom “One Day at a Time.”

One thing Eddie didn’t do was teach his son how to master the guitar. As Wolfgang described it, the guitar virtuoso in fact wasn’t much of an instructor. “I’ll ask him how to play something and then he just proceeds to be Eddie Van Halen, and that’s a very tough bar to reach as a beginner. So, it’s like, ‘Oh, okay,” he recalled with a laugh. “He’s like, ‘Well, do this,’ and I’m like, ‘Fuck you. I can’t do that. You’re Eddie Van Halen.’”

Even so, Eddie was supportive of his son’s musical development. At 10, he used a stack of magazines to teach Wolfgang the drum pattern for AC/DC’s “Highway to Hell.” Wolfgang picked it up quickly, so Eddie bought him a full kit. After mastering the drums, he started learning other instruments. At 15, Wolfgang replaced Michael Anthony as Van Halen’s bassist.

Howard wondered if Roth, the band’s vocalist at the time, was skeptical of Eddie’s son joining their ranks.

“I’m sure,” Wolfgang said. “That’s the knee jerk reaction. Anybody would have a cynical response to that, but we did it so I guess he was okay with it.”

Howard imagined being a member of one of history’s great rock bands might make for an unusual childhood, but Wolfgang said his classmates actually didn’t treat him much differently after he returned from a year-long world tour.

“I was even more of a dork,” he recalled with a laugh. “When I came back, I’d be walking through the hallway and they’d be like, ‘Hey look, it’s the bass player for Van Halen.’ It should be cool, but it’s not for some reason.”

Howard had firsthand experience with rabid Van Halen fans and wondered how a teen could survive that kind of atmosphere. “There are groupies and stuff … What did the old man say about all that?” he asked.

“There really wasn’t,” Wolfgang laughed. “If by groupies you mean me playing a lot of video games by myself on the bus, then yeah there were a lot of groupies.”

In addition to being Van Halen’s bassist for over a decade now, Wolfgang has also developed his solo project Mammoth WVH. Making music understandably took a backseat as his dad’s cancer worsened, but he told Howard he never stopped working on “Distance,” the gut-wrenching tribute he wrote for his dad.

“There are a bunch of other ideas that are just sitting there and waiting to be finished. ‘Distance was one of those,” Wolfgang said. “When this happened I was like, ‘Let’s finish it and put it out for dad.’”

Howard was moved not only by Wolfgang’s song but also his music video which featured home footage of him spending quality time with his father. “I watched it 10 times … When you’re sitting on your dad’s lap and he’s playing the piano, I fucking lost it,” Howard said before premiering “Distance” on the air.

“I’m all choked up just listening to the song,” co-host Robin Quivers said after hearing “Distance.”

Howard wondered what was next for Van Halen.

Despite rumors to the contrary, Wolfgang assured Howard and his listeners he had no intention of taking his father’s place as the band’s guitarist. Those were shoes he was simply unwilling to fill.

“That’s fucking stupid,” Wolfgang said of the rumors. “You can’t have Van Halen without Eddie Van Halen. I’m not my dad. I’m not going to replace him,” he said.

“I’ve spent my life making sure I’m not like him and I’m my own person,” he continued, explaining his father—were he alive—would instead encourage him to pursue his own ambitions. “He’d be like, ‘What the fuck are you doing? Go do your own shit!’”

Wolfgang understood why desperate Van Halen fans might want to see the band live on, but he couldn’t imagine it happening. “In my opinion, outside of maybe a tribute show at some point down the line and archival releases further down the line, it’s done,” he said.

“I don’t have a dad anymore and I’m coming to terms with that,” he continued. “So, I think fans can come to the terms with the fact that we’re not going to have Van Halen anymore. The music is going to live on forever but you can’t continue without Eddie Van Halen.”

Speaking of archival releases, Howard was curious to learn more about Eddie’s reportedly huge collection of previously unheard music. “What is in the vault?” he asked.

“A shit ton of tapes that will take a very, very long time to go through,” Wolfgang said. “As disappointing as it may be for some people to hear, that’s not the priority right now.”

“Would it be too painful to go through right now?” Howard asked.

“There will be a time that we go through it, it’s just not right now,” Wolfgang continued. “We want to do it right, whenever the time is, but it would be a little shameless to do it right now. It would be milking dad … with ideas that probably aren’t out there for good reason. He put out the good shit.”

Near the end of the interview, Wolfgang took a few minutes to assure Howard and his listeners that previous rumors of a massive Van Halen reunion tour were indeed true. “[They] were very real. Since 2015, I’d been talking with Dad and was introducing the idea … I would be like ‘Hey dad, you know what would be cool? Hear me out … what if I opened for you guys and we had Mike [Anthony] come back?” he said.

“As time went on, he warmed up to the idea. I got him excited about it,” he continued. “At a certain point, it turned into what we joked was the ‘Kitchen Sink Tour’ because after he was okay with that arrangement it was like, fuck, then let’s get Dave [Lee Roth] and [Sammy] Hagar and even [Gary] Cherone and let’s just do a giant, fucking awesome thing.”

Unfortunately, Eddie’s cancer caught up with him before the tour could become a reality. “We were so excited about it. All of us. It just, uh, didn’t pan out,” Wolfgang said.

Howard was sad the tour never happened but grateful Wolfgang had so many opportunities to forge great memories with his dad. “What a great love affair between you and your father,” he said. “You’re lucky to have at least experienced that.”

“Absolutely,” Wolfgang agreed, adding, “People have been so wonderful. Thank you to everyone for the support.”

Mammoth WVH’s “Distance” is available now, with Wolfgang’s portion of the proceeds going to The Mr. Holland’s Opus Foundation. 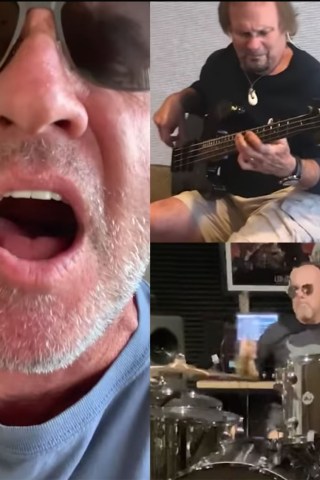 Sammy Hagar’s Band Covers the Who From Quarantine
You Give us your email Address we'll give you even more howard!