“My sinuses, man, they almost exploded,” the staffer says in a clip from 2013

Las Vegas is suffering through a blistering heatwave right now which has left Stern Show staffers and listeners alike concerned for the wellbeing of soon-to-be Sin City resident Ronnie “the Limo Driver” Mund.

Ronnie has repeatedly insisted the dry, desert heat won’t bother him, but on Monday morning Howard revealed that hadn’t always been the case. “The guys found this great clip from 2013 when Ronnie and I were both in Vegas … talking about how horrible the heat was,” Howard said before playing the clip.

Sure enough, 2013 Ronnie seemed beyond annoyed by the thought of spending another second in Las Vegas. “My sinuses, man, they almost exploded,” he declared. “It was horrible. You couldn’t breathe.”

“He was miserable,” Howard said after hearing the conversation from 2013. “Did you listen to that tape, Ronnie? That was you. I didn’t make that up.”

“Yeah, I heard it,” present-day Ronnie said. “That was a one-time thing. I’ve been there a hundred times since then and I’ve been fine.”

Co-host Robin Quivers couldn’t believe Ronnie thought he’d be fine in a heatwave just because the air lacked humidity. “Look, I’ve been everywhere across the country. There’s no difference between dry heat and wet heat—hot is hot,” she told him.

“You live your life the way you want to live it. I’ll live it—the rest of what I got left—the way I want to do it,” Ronnie countered. “Go cry about it. I don’t care.”

“Only!? Dude, we were there and it was 106 and we were going nuts,” Howard recalled before playing a montage of Las Vegas news anchors bemoaning record-breaking temperatures of 116 and predicting more scorching days on the horizon. “I’m concerned about you,” he added.

“I get it. Thank you. I appreciate it, but I’m still going, okay?” Ronnie responded.

In the end, not everyone was worried about Ronnie’s decision to head to the desert. Talk show host, friend of the show, and Las Vegas native Jimmy Kimmel wrote in and suggested Howard’s longtime limo driver was making the right call. “I think Vegas is probably the best place for Ronnie,” Kimmel said. “Jokes aside, it holds about as much fun as perverted old people can have.” 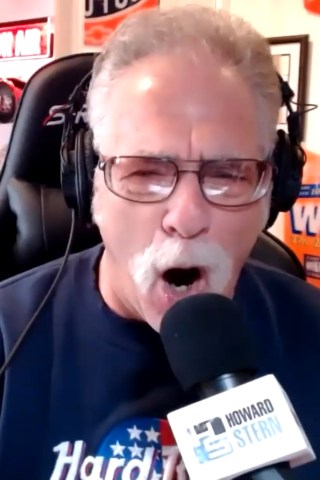 Ronnie Gets Flack for Real Estate Pics
You Give us your email Address we'll give you even more howard!