Coldplay joined the Stern Show on Wednesday morning, live from Harlem’s Apollo Theater. The beloved British rockers are preparing for a concert at the iconic venue—their first public performance since the onset of the pandemic—but not before putting on an exclusive show for Howard and his listeners.

In addition to performing three songs, including both an epic new track and their highest-charting singe of all time, frontman Chris Martin, guitarist Jonny Buckland, bassist Guy Berryman, and drummer Will Champion sat for an interview touching upon everything from the band’s songwriting process to the advice they once received from U2.

First, Howard wanted to know how the other guys felt about Martin’s massive popularity. “Is it hard being in a band where Chris gets so much attention?” he asked.

“From my point of view, it’s kind of ideal. I don’t love the spotlight. I have a physical shield. My drums sort of prevent me from being seen below the waist,” Will said. “I think we’re all in the roles that we want to be in and I think that’s one of the reasons why things have gone so well over 20 something years.”

Improbably enough, the foursome met at a college in London where they all lived in the same dormitory. The guys recalled becoming friends before becoming bandmates. They partied together for months before Chris, a lifelong music lover, realized Jonny could play guitar. They soon enlisted the talents of Guy and Will, and the rest was history.

“Did you sense magic in a bottle right away?” Howard asked.

“I remember hearing some of the early songs that Chris and Jonny and Guy had worked on before I joined the band, and it was very clear that they were not sort of just average student jams,” Will said. “It was quite clear there was something going on between Chris’s melody, specifically, and Jonny’s guitar playing.”

Considering they’d been going at it for decades, Howard was curious to learn the secret to their enduring success.

“We also share money and share [writing] credit. I think that’s part of it, too.” Chris added. “We have it balanced pretty fairly.”

Howard was eager to hear more about their collaborative songwriting process.

“Nine times out of ten, an idea will get sent to me from wherever they come from,” Chris said. “Then, if I think it’s worth showing Johnny, Guy, and Will, then I’ll do that. And then, if they think it’s worth playing on and writing on top of, they do that.”

“It’s like a production line,” he continued. “By the time the song gets released it’s been through such a rigorous audition process.”

Not Cuckoo for ‘Clocks’

Rigorous though Coldplay’s song vetting process may be, it hasn’t always been foolproof. When Chris brought the group an early iteration of their eventual breakthrough hit “Yellow,” for example, not every bandmate was bursting with enthusiasm. As Chris remembered it, Will and Jonny were playing video games in the studio at the time. They gave Chris faint praise after he performed it for them but could barely be bothered to look up from their game.

“To be fair, it was quite different than how it ended up,” Will said. “It was a sort of vaguely Neil Young-ish [song]. It had a bit of a slower tempo.”

Will’s initial criticism of their Grammy-winning tune “Clocks” was far harsher. “That’s rubbish. That’s not even a song,” he recalled saying at the time. “I just felt like it didn’t have a chorus. It still doesn’t really,” he told Howard with a laugh.

Will has learned to love it, of course. “It’s a wonderful piece of music,” he said, explaining he’d been very narrowminded in terms of what songs could and should be. “I ate my hat on that one many years ago, but if it still needs eating I’ll keep munching away,” Will added.

Chris, meanwhile, appreciated his bandmates’ constructive criticism. “I know that if I really believe in something I just need to keep chiseling away and at some point Will will say, ‘That’s good,’” he said. “It’s difficult sometimes, but I wouldn’t have it any other way.”

The Adventure of a Lifetime

Coldplay has been on top of their game for decades now, yet from the looks of it their love for making music hasn’t dwindled one iota. “I can’t imagine doing anything better or more fun or more exciting,” Guy said, explaining the band’s rollercoaster ride has been filled with highs, some lows, and even some “Spinal Tap moments.”

Touring the globe for months at a time while separated from their family used to be one of those lows, but in recent years the band began bringing their families with them on the road. These days, they might be rolling with as many as 13 kids with them at one time.

“Life is very different for us now because we’ve got lots of children we try to incorporate into our plans,” Guy told Howard. “That’s given us a completely fresh perspective on touring … You’re seeing a lot of places you’ve been to before through someone else’s eyes.

A family tour also gives the children an opportunity to see their dads in a completely new light. “The teenagers have an ability to just completely ignore or disregard whatever it is their parents do, so actually taking them and reminding them that their dads are—or used to be—cool … [is] really very lovely,” Will said. “My kids are like, ‘Oh, I get it now. They’re actually alright.’”

The guys revealed they had been fortunate over the years to receive guidance and advice from a variety of rock predecessors, including Brian Eno—who has produced their music—to Ian McCulloch of Echo & the Bunnymen fame. They’ve also learned a couple lessons from none other than Irish rock icons U2.

“I was fortunate to have a good conversation with [U2 drummer] Larry Mullen,” Will said. “That kind of stuff is really so invaluable.”

Jonny then recalled an adventure they’d once had at the home of Mullen’s bandmate, Bono. “We supported U2 in Ireland [and] Bono invited Will and I to his house the next day. He was telling us what to do as well,” he said. “He was so lovely. That blew our minds. We were just kids out of college and suddenly we’re in Bono’s house.”

“With Woody Harrelson,” Will added, explaining traveling there involved hopping into a cab and saying, “Take me to Bono’s house.”

The first song Coldplay performed Wednesday morning was “Fix You,” which Chris wrote around a time needed some help navigating some particularly rough waters, right around the release of their third studio album, “X&Y.”

“We were fucked,” Chris said, explaining band members were battling addictions and “strange” relationships while struggling to deal with a new level of fame. “Everything but the music took over,” he continued. “We even lost touch with our audience … but it was only because of that song ‘Fix You’ that we survived that time.”

“Absolutely masterful,” Howard said after hearing it. “You got a tear out of me on that one.”

Next up was Coldplay’s highest-charting single, “Viva la Vida.” The song title was based on a painting on a watermelon Martin saw at famed artist Frida Kahlo’s house in Mexico while the lyrics were partially inspired by the revolutionary themes of “Les Misérables.” The song ultimately became a smash-hit despite their record company’s original insistence the band leave it off their album.

“[They] said ‘You gotta take this song off because it doesn’t sound like a band,’” Chris recalled. “Then Steve [Jobs] put it in an Apple commercial which made it a hit song.”

As much as Howard loved the tune, he couldn’t understand why the words “Viva la Vida” weren’t part of the lyrics. “Is that allowed in music?” he joked.

“Yeah,” Chris responded. “How weird would it be if it was like, ‘Mama, I just killed a man—it’s a Bohemian Rhapsody.’”

Coldplay finished the mini-concert by performing their epic new song “Coloratura” live and for the very first time. Clocking in at over 10 minutes, it’s the longest track they’ve ever put on an album.

Coldplay said they intended to play the song once again during their exclusive concert for SiriusXM listeners at the Apollo Theater in Harlem. “There’s always such a warmth to these places and such a history and a heritage,” Guy said of the Apollo.

“You can’t really be interested in music and not understand the Apollo is the same as Wembley Stadium or something like that where we come from,” Chris agreed. 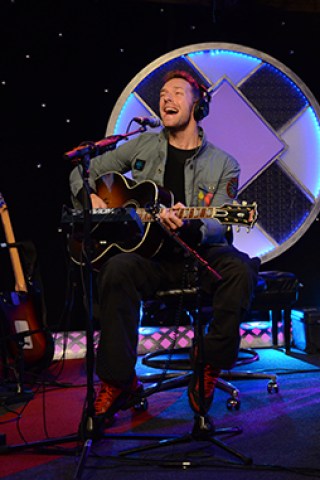 Chris Martin on Why This Could Be Their Last Album 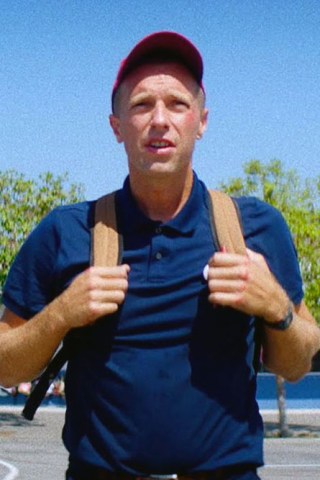 Coldplay’s Chris Martin Is ‘Champion of the World’ 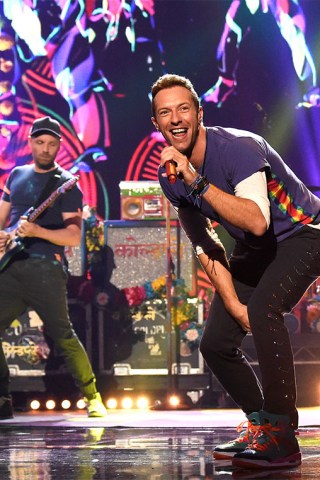 Coldplay Drops Career-Spanning Documentary Trailer
You Give us your email Address we'll give you even more howard!