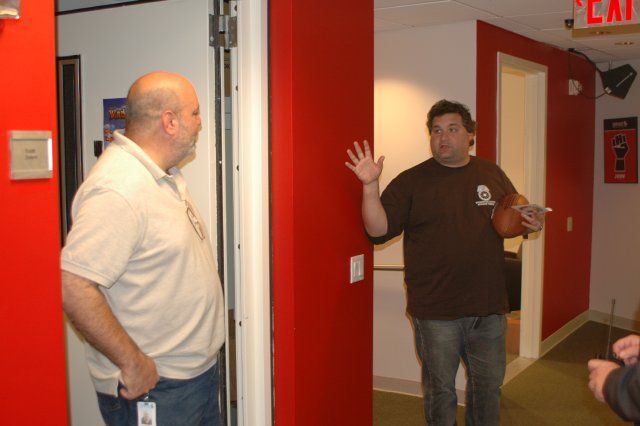 The show started today with Howard saying his headphones weren’t working properly, so Scott the Engineer came into the studio to help.

As Scott made his way in, Howard pointed out he thought Scott looked hungry because of his participation in the Battle of the Blobs, and Robin felt Scott was still going to lose the competition despite all the weight he’d lost.

Scott responded by admitting he was planning on finishing in second place in the contest, and guessed he was down from 227 pounds last week to about 220 pounds today.

Howard went on to joke he felt part of the reason Scott was now in such good shape was because of his bowling, but Artie noted he thought anyone could become a good bowler if he or she practiced enough, especially because there’s no defense in the game and its “parameters never change.”

Scott then told Artie, though, that he’d not only challenge him to a bowling match, and he’d even spot him 75 pins too. However, even though Artie acknowledged he was intrigued by the offer, he also said he didn’t think he’d ever be bored enough to bowl.

Howard then asked Scott how often he bowled, and he replied he was in a league that met once a week. Scott proceeded to mention there were separate bowling leagues for men and women, which Howard didn’t understand. Scott then explained there were several differences between men and women bowlers, with the weight of the balls and the physical attributes of the bowlers being the most prevalent.

Despite his theory, Scott didn’t think he could beat a professional female bowler, although he did say he’d be willing to try. When Scott claimed his highest bowling score ever was a 290, a caller then described Scott as “the loser’s loser” because he thought the score meant Scott started the game with 11 strikes and then had a gutter ball on his final roll. Scott then told the caller, though, that there was another way to score a 290 – namely by starting the game with a spare and then getting 11 straight strikes – which was how he got his score.