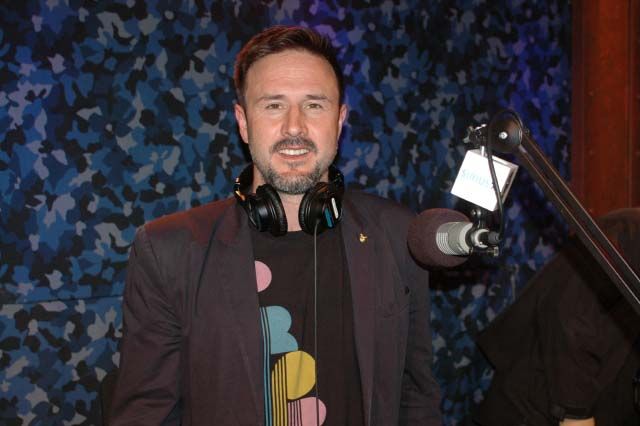 Star Intern for the Day

David Arquette stopped by to sit in on the show and hopefully get some inside information on Howard’s negotiations with Sirius XM. David said he just wanted “to see if I could get any info. We all want you to stay here.”

David added that he also hoped to catch sight of Robin’s breasts: “[I came to] see if I could talk her into showing us those chocolate milkers.”

The Arquettes’ Mom Was a Fetish Star

Howard showed David that his mom’s work (as ‘Brenda Denault’) was catalogued on Mr. Skin–David was blown away: “Mom’s on Mr. Skin! This is awesome!”

Howard looked at some of the Mr. Skin screencaps of David’s mom and was shocked: “Here’s a guy taking a soldering iron to your mom’s tits! That’s crazy.”

Will David Run the Sybian?

David said he planned to experiment himself, even warning his wife that he might take control of the Sybian on today’s show: “If you just flip the switch it’s not cheating.”

When Howard said he’d actually have the chance, David backed down: “I was just joking…I just wanna watch!”

Later, David thought out loud: “I think I’d definitely get in trouble. I don’t think–no, she wouldn’t divorce me for working the controls.”

Robin cut in: “But you’d definitely have to have a counseling session?” David laughed: “Yes! Right into therapy.”

David on His Marriage

Howard continued to dig into David’s marriage, and David was surprisingly honest about their joint therapy sessions: “We started going to couples therapy a year before we [even] got married.”

David laughed that Courteney was so beholden to routine, he couldn’t get her into bed until 40 minutes after midnight on New Year’s Eve: “She was working out. And then her friend came in and she was talking and then I had to come down and I was like, ‘C’mon. It’s New Years. Let’s go now.'”

David said they scheduled for sex once week but weren’t totally without their spontaneous moments: “There are those random little, you know, special times that just kinda pop up. But she’s not big on sex at night. Cause she’s tired. She’s a daytime f’er.”

David later admitted Courteney wasn’t very adventurous: “I can’t get her into lingerie…I bought her a box for Valentine’s Day one year and it just sat there.”

Courteney Cox Is Not a Pain in the Ass

Howard read some reports of Courteney’s demanding behavior on the set of ‘Cougar Town,’ but David dismissed them:

“Courteney’s not a pain in the ass at all. She’s a tough businesswoman. She’ll–you know–if shit’s going wrong, she’ll call people out. She’s the kind of person–she so honest that if somebody’s f’ing with her or something, she’ll bring it up right in the middle of a restaurant or on set. She’s not a bullshitter.”