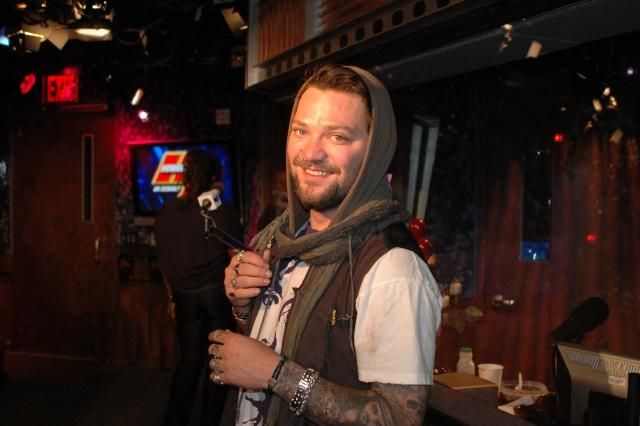 Bam Margera called into the Stern Show and opened up about recently finding a naked female fan in his bedroom.

“I’ve seen a lot of bizarre things before but this, by far, tops it big time. I honestly thought I’d never be so scared of a 24-year-old naked chick,” he said.

Bam woke up to her jumping on his bed, kissing him and talking gibberish: “She wasn’t making any sense at all,” he recounted. “She was saying, ‘Al sent me from Jupiter’ when I asked who she was.”

At first, Bam wondered if he was being punked (since he is now the host of MTV’s “Punk’d.” But he eventually realized the woman in his bed was disturbed. “She looked like a hippie–like a skater girl. One that didn’t bathe too often,” he said.

Of Goats and Trailers

Police eventually wrangled the culprit after a seven hour search of Bam’s property, but her kisses left a lasting impression. “This [woman] just gave me herpes or I have a major stress blister from all this,” he said.

Bam said she’d also once shown up, with all her belongings at his parent’s house–to marry Bam. “She would say things like, ‘My parents invented goats and trailers,'” he recounted. “Either she was completely mentally ill or on tons of acid or something.”

Howard then asked Bam to hand the phone over to his girlfriend, Nikki, who explained why she didn’t think she was Howard’s type, but Howard still wanted to put Nikki, an artist’s model, to work. “We’ve got this artist JD Van Gogh here. He’ll be drawing you,” he joked.

Before hanging up, Nikki hoped Bam had no more stalkers out there. “Bam was talking about getting a gun, but I can’t allow that because I’m a felon. I caught my boyfriend at the time cheating and I pistol-whipped him,” she said.