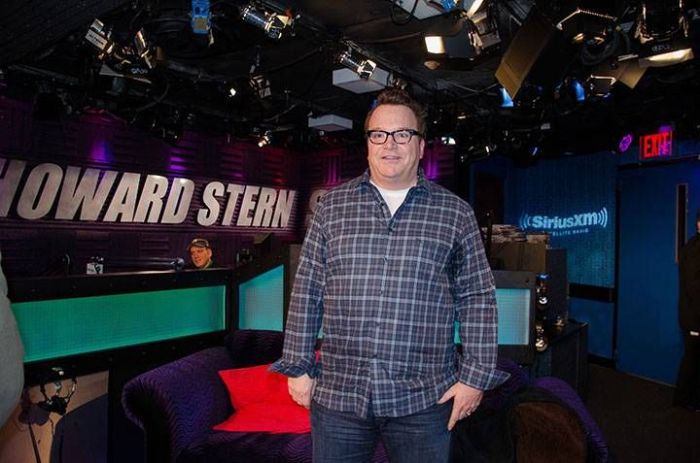 Tom Arnold stopped by to promote his CMT series, “My Big Redneck Vacation,” and crow about his pregnant wife, Ashley, crediting the miracle of test-tube conception.

Tom told Howard it was “devastating” when he and his wife initially failed to conceive naturally. He said eventually Dax Shepard even offered to donate his sperm. “I don’t know if I’m breaking a confidence. But that is about the kindest thing. Seriously,” Tom Said. “He is the nicest human in the world.”

Tom told Howard he quit Diet Coke and drank—at Ashley’s request—a really funky fertility tea for over a year. “I said, ‘I’m going to do this for her.’ And I got acupuncture. And then a miracle happened,” Tom said.

Doctors approached Tom with a new procedure, the miracle solution to their problem. But the miracle was sobering: a surgeon would cut a hole in Tom’s scrotum, pull the testicle out through the hole, and stick a needle in the testicle—so the sperm wouldn’t have to go through Tom’s (possibly faulty) plumbing.

Tom’s hand was forced. “My fucking wife is sitting right there. So now I have to do this,” he said.

Tom confessed that he had to apologize to Arnold Schwarzenegger and Maria Shriver after joking about Arnold’s infidelity during his last Stern show appearance.

“I knew that I should reach out,” he said.

Tom said he called both Maria and Arnold and each of them was forgiving. He also said he also attended Arnold’s Christmas party in December, only to find it stocked with exotic animals. “He adopted them all just so he could have them at his Christmas party,” Tom explained.

At one point, Arnold got tired of watching the waitstaff carry around baby kangaroos and asked that his tiger swim in the pool: “And then the tiger, I think, is medicated because it starts struggling in the water. He was like a stripper they’ve hired that gets fucked up in the jacuzzi and starts drowning.”