Actress sits down with Howard ahead of her new film “Sicario” 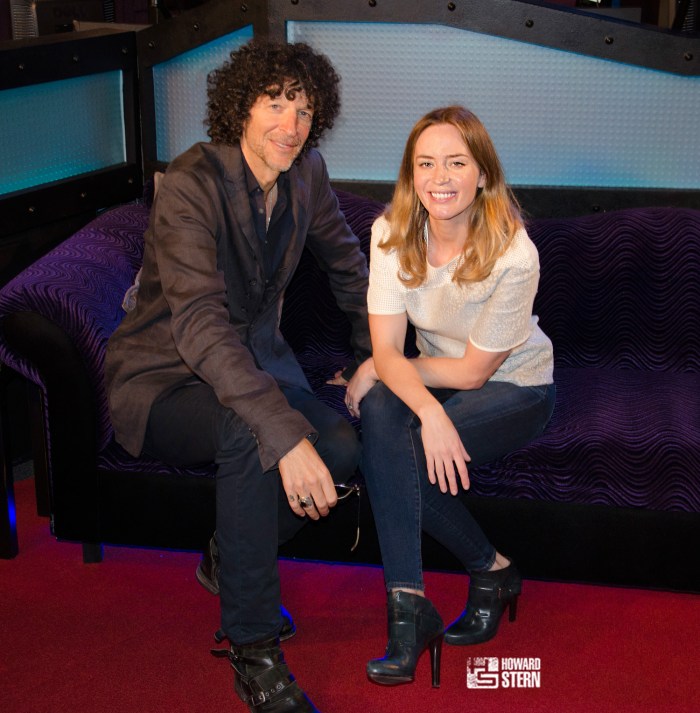 Ahead of the worldwide release of “Sicario,” Emily Blunt came by for her first appearance on the Stern Show in what was an incredibly entertaining interview. Check out some highlights below.

Emily told Howard that when she was younger, she never thought she’d be an actress because she stuttered as a child. It wasn’t until one of her teachers, Mr. McHale, noticed that her stutter subsided a good deal when she was acting or doing funny voices. He suggested she join the school play and while she was initially hesitant, she decided to do it.

Nowadays, she explained, it only really comes back when she speaks on the phone because of the pressure to convey everything using only her voice. Additionally, it reared up near the end of her pregnancy.

Much later in her career, Blunt starred opposite Bruce Willis – another star who has suffered from stuttering – in “Looper.”

“We talked about it Day 1,” she recounted, “because I had written him a letter to try and get him to speak at this gala I do every year to raise money for kids who need a scholarship for treatment. And he just said, ‘I’m too nervous because I’m nervous I’m just going to stutter.'”

Howard wondered if that’s why he gives off an air of being uninterested and aloof during interviews.

Emily thought that it could definitely be part of it. “I think that he is innately quite shy as well. But I think stutterers – and I’m guilty of it too – you come up with ways of avoiding it. It’s all avoidance tactics,” she explained.

One of the breakout roles for Blunt was her part in “The Devil Wears Prada.” In order to prepare for it, she explained she looked to people in her everyday life for inspiration on how to play a character that no one would want to hang out with.

“I saw a mother speaking to her child in a supermarket when we were shooting that film and it’s a line that gets quoted back to me now, where she yelled at her kid in the supermarket … ‘Yeah, I’m hearing this and I want to hear this,'” while making a closed-mouth hand gesture.

The Allure of “Sicario”

Emily’s new movie, in which she co-stars with Benicio Del Toro and Josh Brolin as an FBI agent, is pretty badass, according to Howard.

The filming process ended up being a bit difficult when Emily got very sick and was constantly vomiting. But she remembered there was a scene where she was supposed to look sickened and sweaty, so she just kept going to get the real effect.

She also got pretty close to Brolin and Del Toro, recalling how Josh would throw a party every weekend for them where they would all just hang out by the pool.

Saying No To Nude

While Emily has gone topless on camera before, she told Howard that this time she pushed back on a scene that called for it in the original “Sicario” script. “We didn’t agree with it,” she said with a laugh before clarifying that “we” was she and her breasts.

Howard wondered if it was weird having to film a scene in her underwear with Tom Hanks in “Charlie Wilson’s War.” Hanks actually told Emily that friends of his who saw the movie and were disturbed by that scene. For her, it was “embarrassing” because she had grown up watching him.

Though Blunt is happily married to John Krasinksi now, Howard wondered what happened between her and Michael Buble, whom she dated for quite a while.

“He brought you home to his mother and she said to him, ‘You better marry this girl'” Howard recalled for his guest. Media reports indicated that Buble was allegedly unfaithful, though.

Emily was coy about it altgoether and settled for an: “It’s complicated.”

Blunt recently became an American citizen – but more importantly, she enraged Fox News so much that they’ve already called for her to leave the country.

The controversy began when Emily joked to the Hollywood Reporter that she “watched the [GOP] debate, and I thought ‘This was a terrible mistake. What have I done?'”

Despite the backlash, Emily told Howard she passed the citizenship test with flying colors. “I have a real affection for the country.”

Check out “Sicario” in theaters everywhere this Friday!