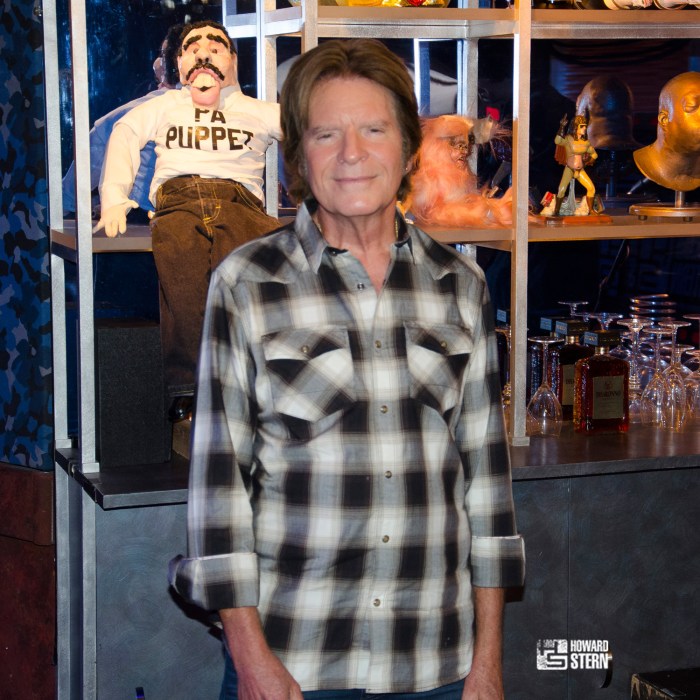 The man behind countless timeless hits like “Proud Mary,” “Bad Moon Rising,” “Down On The Corner,” and “Fortunate Son” — the one and only John Fogerty — arrived at the studio ready to look back on his iconic career with Howard and play a few songs along the way. Check out some highlights from his fascinating life below.

One day, when he was 3 ½ years old, John’s mom brought him home from pre-school and gave him a Stephen Foster record with “Oh Susanna” and “Camptown Races,” and that’s the moment he remembers realizing he could be a songwriter. Even at that young age, Fogerty began showing promise in music — especially after he began taking folk guitar lessons with his mother in a group class.

Though they had an old Stella acoustic guitar hanging around the house, it wasn’t until Fogerty got a paper route and got enough money to buy an electric guitar from Sears that his technique started developing. “At some point I stayed home from school for a month” to just practice, he told Howard.

The Worst Contract Of His Life

Fogerty and his bandmates in Creedence Clearwater Revival (who were then known as the Golliwogs) were signed to a contract with Fantasy Records before it got bought by Saul Zaents. Once he took over though, Saul gave them a new contract to look over — and at that point they were thrilled to even be on a label.

They gave the contract to bassist Stu Cook’s father who, was a prominent lawyer at the time, to look over. Though some mystery still surrounds whether he actually looked at it or not, John remembers Stu telling them the contract was “OK,” to which the rest of the band said “OK for what?” Stu said “OK to sign” and they didn’t think about it anymore until it was too late.

“We were doomed once we signed that contract,” John explained.

Finding Success In A Cover

The first real hit that the band had was actually a cover of Dale Hawkins’ “Susie Q.”

“The first underground station in the world was in the Bay Area,” John recalled, and they would play these tapes that weren’t really records, but featured some amazing performances. So the guys decided they’d pick a song they already knew and “trick it out” and record it. “That was the breakthrough,” Fogerty said.

While they were becoming more famous, it wasn’t until Fogerty-penned masterpieces like “Fortunate Son” and “Proud Mary” that CCR began really becoming a major success — the former of which, Fogerty told Howard was written in only 20 minutes.

Unfortunately that’s also when John bandmates began grumbling about the songwriting process, which until then had been Fogerty bringing them the songs for the most part. Howard wondered whether they appreciated that John was bringing them hit after hit, but Fogerty figured” there was something amuck there.” Looking back he thinks that they were jealous of him.

“You’re the goose that laid the golden egg,” Howard chimed in.

Before “Proud Mary” was a hit song, it was just a phrase in Fogerty’s journal and he had no idea what it meant or what to do with it. Check out above to see his original journal and more!

One thing that many fans have wondered about over the years is why CCR’s performance wasn’t included in the legendary Woodstock documentary. Fogerty said that it was actually his decision to not appear in the film because their performance wasn’t “superior,” in his words. It was the middle of the night and everyone was asleep because as Fogerty remembers it, the Grateful Dead, who were on before CCR, took a bunch of LSD and “got lost” onstage.

“Have You Ever Seen The Rain?”

Tune in to Howard 100 on SiriusXM to hear the full interview and be sure to check out Fogerty’s new memoir, “Fortunate Son: My Life, My Music,” out now. He will also be performing his hit songs at the Venetian Las Vegas for 8 residency shows Jan 8-23! Use code “PEACE” for tickets: http://tinyurl.com/oehm4f9