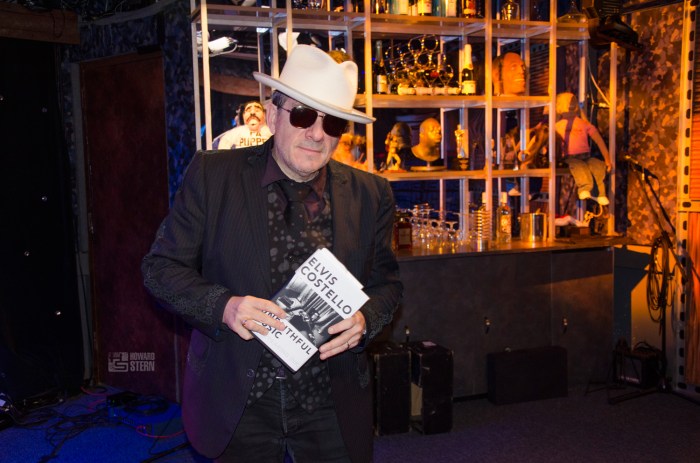 Elvis Costello — the man whose first three albums all show up on Rolling Stone’s 500 Greatest Albums Of All Time list, and a musician who our very own Fred Norris refers to as a genius — graced the studio with some unforgettable musical moments this morning as he delved into his career in an interview with Howard. Check out some highlights below!

One special thing about Elvis’ memoir is that he wrote it completely by himself without any co-authors or ghostwriters. He told Howard he didn’t even know people did that. “Maybe I wouldn’t have put so much into that if I had known that,” he joked.

The book comes in at a lengthy 670 pages (though he said that editors also cut out much more that he wrote).

Howard wondered if Elvis found himself leaving out certain stories from the book so that he wouldn’t hurt people. “I didn’t write in a lot of detail every little fight and indiscretion,” the legendary musician explained, because really the important part was the actual music. “I was writing about music mainly and how it came through my family.”

The ‘Hotel California’ Story Is a Myth

The story of Costello’s second album cover, for “This Year’s Model,” has long been followed by a tale of Elvis asking photographer Chris Gabrin to play “Hotel California” because he hated that song and wanted to look angry in the picture.

When the story came up today though, Costello insisted that it was a myth. “That’s not true,” he clarified. “I think that’s just been made up by people.”

In one of the most iconic musical moments in “Saturday Night Live” history, Costello and the Attractions, who were a late replacement for the Sex Pistols, were invited to perform in 1977 and Columbia Records insisted they play “Less Than Zero” since it was already an established tune for the band. Costello started out with a few bars of that, but quickly called it off and instead told the band to break into “Radio Radio.”

Despite tons of media coverage touting that he was banned from “SNL” (and the fact that he wasn’t invited back until 1989), Elvis maintains that it wasn’t actually that big of a deal.

“Live is in the name of the show — it’s like a bit of a clue,” a perplexed Costello mused. “Lorne says after the fact now that he didn’t really care what we did. My scrap was really with the record company.”

Moreover, Elvis questioned how many people actually saw it at the time considering no one really had VCRs back then.

“We just did what we wanted,” he continued. Now whenever anything outrageous happens, they turn back to that moment. “When Sinead tears up the picture of the pope they blame me. Ashley Simpson gets caught miming they blame me,” he laughed.

While he neither lands squarely in the Stones nor the Beatles camp when it comes to choosing one, Costello’s musical upbringing was seemingly much more intertwined with listening to the musical writings of Lennon and McCartney – and that must have made it even more intimidating for him to write with Paul in recent years.

“He was great about it,” Elvis recalled though. One of the songs they were working on was called “Veronica,” which is about Costello’s grandmother suffering from Alzheimer’s.

“It isn’t the sort of thing you’d typically write a pop song about. You could’ve written a really sad ballad about it, but because I still wanted to hold onto the idea that there was something in her mind that gave her some comfort – I wanted to make a bright pop song so that it was kind of defiant. And I wanted it to be as bright and have as many people hear it as I could. That’s what I felt I should do with that story. And he helped me make it like that.”

Listen above for more stories from their sessions together.

For more incredible stories and musical moments, listen to the full interview with SirusXM On-Demand and be sure to grab a copy of Elvis Costello’s “Unfaithful Music and Disappearing Ink,” out now!