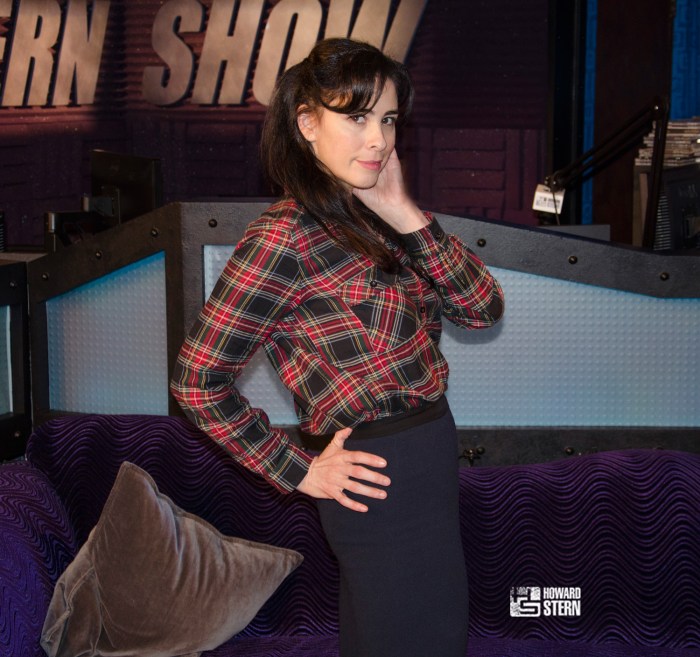 Up next this morning, we had Sarah Silverman back in the studio to catch up with Howard. Sarah is starring in a new film called “I Smile Back,” in which she plays a severely depressed housewife – a role for which she turned to her personal life for inspiration. Check out the highlights below.

Another Win For Howard

Before Sarah came in, Howard said he learned a fact that he jokingly claimed made him furious with her. Silverman was actually offered the lead in “I Smile Back” as a result of Amy Koppelman — who wrote the book upon which the film is based — hearing Sarah’s prior interview with Howard where she talked about suffering from depression and decided to contact her.

Howard grilled Sarah on why she hadn’t told him yet, but Sarah fired back that she doesn’t “waste her emails” to him and doesn’t just send him messages “willy-nilly.”

Howard rebuked her, saying that when Amy Schumer teamed up with Judd Apatow for “Trainwreck” as a result of her interview with Howard, she told him before the film was even made. Sarah said she decided to wait until the movie was being promoted to tell Howard and stood by her decision.

Comedy? Drama? Neither? Both?

When asked about the future, Sarah maintained that she is “always going to be a comedian.” Moreover, she told Howard that it was stressful filming the movie. “[I]t takes me away from standup and then I’m like two steps behind.”

Howard wondered how committed Sarah was to the daily grind of work in light of a comment he had heard from her where she “kind of questions how motivated” she is.

“I don’t think you work as hard as you should,” Howard continued.

Inspiration From Her Personal Life

In “I Smile Back,” Silverman’s character, Laney, suffers from severe depression — something Sarah herself has battled with since her early teens. And while she refuted reports that she had stayed in character while not filming (aka Daniel Day-Lewis’d it), channeling the dark emotions did prove hard to step away from at times.

Howard, who is a major proponent of talk therapy, wondered if Sarah felt there were ways to talk your way through depression. Sarah said she while she hoped medication was not the first option for patients, it was necessary for her. “I take a small dose of Zoloft every day and it’s saved my life,” she told Howard. Well that at a little bit of pot, of course.

Despite the character hitting close to home for her, Sarah said she never even considered going off her own medication as inspiration for the movie though. “I don’t spiral into complete paralysis [nowadays], but that’s what would happen for sure,” she explained.

Hear the rest of the interview on SiriusXM’s Howard 100 and be sure to go see Sarah as the lead in “I Smile Back,” which is out in theaters now!