The Australian pop-punk foursome is having their Beatles moment 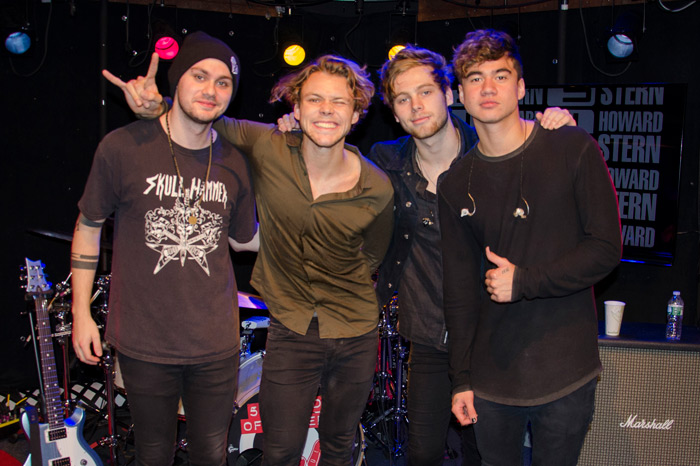 Australian pop-punk foursome 5 Seconds of Summer appeared on the Howard Stern Show after landing their second No. 1 album on the Billboard 200 chart with “Sounds Good Feels Good.”

“You’re having your Beatles moment,” Howard proclaimed as they walked into the studio with a posse of young fans hanging outside the building in anticipation.

The interview, which they called “probably the first cool show [they’ve] ever done,” got to the heart of what makes each of the band members tick, both individually and successfully, as a band. Moreover, the talented young musicians sailed through three different tunes (“She’s Kinda Hot,” “Hey Everybody,” and a cover of Green Day’s “American Idiot”) to reinforce what many already know – these guys can really rock. Check out a few of the highlights from their performance and story (below).

5 Seconds of Summer Perform ‘Hey Everybody!’

If their latest tune rings of familiarity to you, you may have heard the song it samples, Duran Duran’s “Hungry Like The Wolf.” That’s intended.

The band found that they could get some fans smiling before the chorus even came and that was something they wanted to capture.

Fun Fact: “She’s Kinda Hot” was originally only meant to be sung by Ashton, but it was too difficult to play drums and be the lead singer, so they decided to have the whole band sing it and ultimately liked it better.

The Truth of Touring the World: They’re Kind of Homeless

“Money is not the be-all, end-all,” the band explained to Howard during their interview. Once they did hit it big with millions to spend, though, their aspirations were pretty down-to-earth: mostly just a place to live. But it turns out since they have been traveling so much none of the band members actually have their own place to live — just hotels. “The thing is, we haven’t unpacked in three years,” they told Howard.

Who Will Be the First to Go Solo?

The short answer? None of the band members have aspirations yet to go out on a solo run. “We all have creative freedom in this band,” Ashton explained. So no one feels stifled at all.

Calum Is a ‘Pretty Free Person’

It seems almost common place these days for at least one member of a band to show their … member to the rest of the world. And so it happened with Calum Hood, who was caught on the internet Snapchatting a video of his nether regions for a girl — and thus the rest of the world — to see.

“It doesn’t disappear! It never disappears,” he offered as an explanation. But don’t feel too bad about it; he doesn’t. “Nothing else can come out that’s worse … I’m a pretty free person.”

There aren’t any wild addictions for these rockers — the guys told Howard out-of-control drinking and drug use just wasn’t their scene, not even pot. Still, while on tour they enjoy “Whiskey and White Snake Wednesdays” on the bus, which is pretty much exactly what it sounds like.

Despite the reality of being four guys in a band and getting a big break on tour with One Direction, 5 Seconds of Summer is not a “boy band” by their estimation. The distinction, for them, is the fact they play their own instruments and write their own songs.

As for the actual writing of songs, initially Calum Hood was the primary songwriter for the band, but as they progressed, each has taken a turn. Usually though, the songs are written in pairs.

So, How Does a Girl Get a Date With One of Them?

Well, if you’re Taylor Swift, simply call them! Otherwise, it’s a tough road considering they’re always moving and leave the onus on the women to find them.

Grab a copy of their record “Sounds Good Feels Good.”