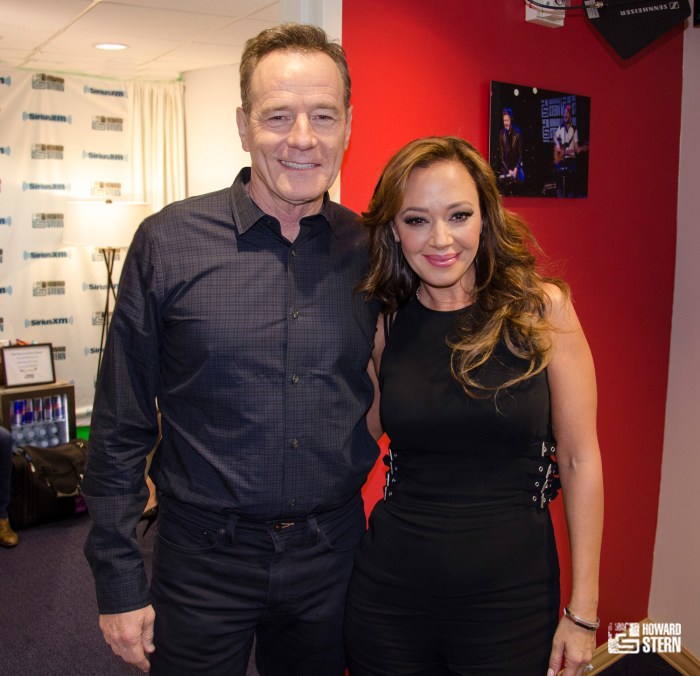 Award-winning actor Bryan Cranston returned to the Stern Show ahead of the release of his latest film which finds the him portraying Dalton Trumbo, one of the Hollywood 10 who was blacklisted from working for many years due to Communist ties.

Howard and Bryan discussed the movie and also delved into a discussion about Cranston’s father, the decision to do “Godzilla,” a different upcoming project, and more. Check out some highlights below.

While his story is not among the most well known, Dalton Trumbo’s tale of Hollywood blacklisting is a fascinating one. “It was horrible,” Cranston described of the era in which McCarthyism raged.

Listen above for a taste of Bryan’s passion for the story and read more about Dalton Trumbo here.

Last time Bryan was on the show he told Howard about his troubled father who, in Cranston’s words, was a “broken man.” Having recently passed away, Bryan reflected on their relationship in retrospect.

Though his father left when Bryan was 11, he and his brother decided to try to track down the man who would later serve as part of the inspiration to the Walter White character in “Breaking Bad” in their twenties. “It was awkward, but we were curious,” he told Howard.

Bryan came to realize that his father “was in an extremely bad place,” when he left as a result of a midlife crisis coupled with suspected alcohol and drug problems. But they maintained a good relationship later in life and Cranston was able to move on.

“What’s really sad is he had a pacemaker put in – he was 90 when he passed – and this is last October,” Bryan recounted. “We’re going through his things afterwards and my daughter found on just a piece of paper — like he pulled off and tore off a piece of paper. And in his shaky handwriting he wrote, ‘The happiest day of my life is when my children forgave me for the worst period of my life.'”

While the benefits of being famous of successful are seemingly endless, there are stresses associated with rising to that level. Cranston opened about the difference between talking to people who are on that level and those that are not.

“It’s a different set of problems that you have now,” he told Howard. “So my friends who I grew up with as actors – I can’t really have a completely open conversation with them because they can’t relate to it. And it sounds like whining. If I talk about, ‘Oh boy, I’m doing this press tour and I just …’ and they’re listening going, ‘You son of a bitch.'”

Howard wondered if there were people on Bryan’s level that he could relate to now. “Just about any successful person that you have a private conversation with,” he explained. “You can totally get each other’s exhaustion or frustration, but you can only keep it in those circles.”

The Sex Life Is Still There

For The Love Of The Movie

After “Breaking Bad,” Bryan was looking for a project that held the same weight to follow it up with, and at the time it seemed “Godzilla” would be that movie – even though he initially didn’t think so.

After he got a recommendation to really read over the script, he decided to take the film – though Cranston maintains that even if he wasn’t in the movie he still thinks his character died too early in the film. If he had his druthers, Joe Brody would have lived long enough to kindle a relationship with his son more so that the death was all the more impactful.

Still, the movie made a ton of money. “It was a nice paycheck … You do those movies for that,” he conceded.

Conversely, Bryan is now working on a film with almost no budget that he will dedicate four weeks to shoot.

“It’s a very independent movie called ‘Wakefield,'” he explained. And according to Cranston a very talented and famous young actress just signed on to be in the film with him.