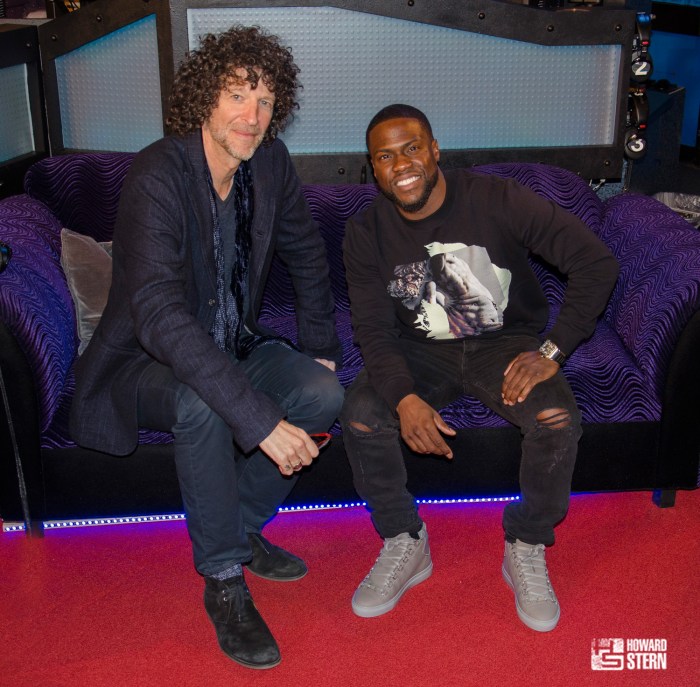 Kevin Hart stopped by the Howard Stern Show studio Tuesday morning for the first time ever. He was here to promote his new movie “Ride Along 2” which he stars in alongside rapper/actor/perennial scowl Ice Cube.

Check out some highlights from the interview!

HIS FATHER WAS AN ADDICT

Growing up in Philly, Kevin had a pretty rough childhood but admits, “I wouldn’t change it, I wouldn’t change it one bit.” Kevin went on to recount the story of a time when his dad stole a $20 bill he received in a birthday card when he was a kid because he was so entrenched in addiction.

“From ages two through eight, my dad did what he could before his addiction got out of hand … heroin, coke, crack, you name it, if you could put it somewhere, it went there,” Kevin opened up to Howard. But he quickly added: “Things happen for a reason. If my dad had been around and didn’t do drugs, I may be handling my success differently. I may be on drugs.”

Today, the “Ride Along” star has a great relationship with his father who is now clean and living in a home Kevin bought for him a few years ago. “I don’t give a shit about his mistakes, that’s my dad,” Kevin said to which Howard replied, “You got a fucking good attitude, I’ll tell you that.”

A SHOE SALESMAN WITH BIG GOALS

Kevin earned his bones selling sneakers at a big shoe store before he was selling out NFL stadiums.

While Kevin didn’t know he wanted to be a comedian growing up, his former co-workers knew they were working with possibly the funniest shoe salesman in town. So much so, a girl Kevin worked with convinced him to perform at a local comedy club’s amateur night .

“I went home, I had a week before the next Thursday came that I agreed to do it,” Kevin said, “and wrote jokes based off my travel to and from work.” Kevin went on to say although his jokes weren’t good at all, he fell in love with everything about stand up comedy. “I walked off feeling like if I were to really study this and understand this, I could do it.”

From there, he began mimicking the cadences of other comics like J.B. Smoove and honed his routine into a bajillion dollar pay day.

HANDSHAKE DEAL WITH HIS MANAGER

Back in 2002, when Kevin was coming up through the comedy ranks, Dave Attell – a mensch among mensches – hooked him up with his manager, Dave Becky. Becky instantly saw something special in Kevin and offered him a handshake deal to work together. “He said if things work out and you feel good, let’s work it out,” Kevin said. “I still work with him and we have no contract and never have. I’ve been with Dave for 14 years.”

“I made it, I made it!” Kevin exclaimed when he got a check for $25,000 to film a pilot for “Freaks and Geeks” executive producer Judd Apatow. Kevin thought it was smooth sailing from there on out — he bought a brand new Mercedes and promised his brother he could stop working. Kevin told Howard that the $25K advance felt like $25 million.

The pilot starred Amy Poehler, Jason Segel and Judge Reinhold and had Seth Rogen as one of the writers. Apatow went as far as to make Segel and Hart live together since they would play roommates in this new sitcom. But alas, the pilot didn’t get picked up.

“And that’s the horror of the television business: you have that many talented people involved and they can’t get this pilot going,” Howard summed up.

Like many other comedians on the rise, Kevin gave “SNL” a shot and scored an audition with Lorne Michaels.

“First of all, the toughest room to audition for in my life,” Kevin told Howard. “Lorne was eating popcorn and you just hear noises like ‘mmm-hmm,'” he recalled.

Kevin muscled through his audition with an obscure impression of NBA Hall of Famer Avery Johnson. Needless to say, the room was left feeling confused and Kevin didn’t make it on “Saturday Night Live” as a featured cast member. But don’t feel bad as Hart has now hosted the legendary sketch show twice, in 2013 and 2015.

BEING FRIENDS WITH THE BIEBS

You might not have known it, considering he served as Roast Master at Bieber’s Comedy Central Roast, but Kevin is actually friends with teen heartthrob Justin Bieber. Hart met the pop sensation a few years back and swore to Howard that he’s a great guy.

“You can not throw that type of success and money and expect them to survive it free and clear,” Kevin said. “If I was famous and 14 and you seen some of the dumb shit I did, it would be all over the place.”

Kevin told Howard that he loves to hook his fans up every time one his movies premieres. He likes to tweet out invites and buy popcorn and treats for a whole theater full of his fans. Check out his movie this weekend (even if Kevin doesn’t buy you a ticket).