“Halfway through, I was like, this is some real Hollywood bullsh-t,” she spills to Howard 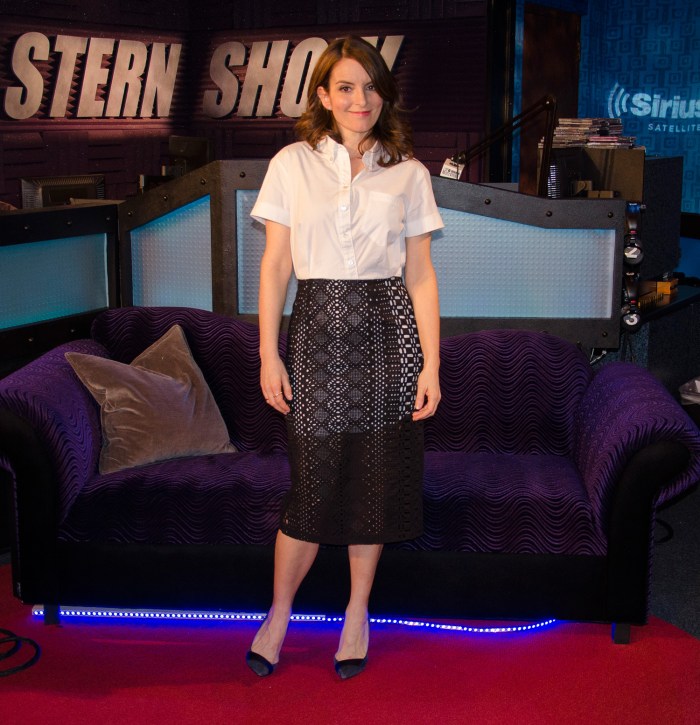 She may not have hosted any major award shows this year but Tina Fey still had a lot to say about Hollywood on Tuesday morning’s Stern Show. Fey is back in New York now after attending Sunday’s Academy Awards and gave Howard her firsthand account of the evening, including what she thought of Chris Rock hosting.

“I thought his monologue was fantastic,” Tina said of her fellow “SNL” alum. “That’s the tricky thing about shows like that – you don’t get a dress rehearsal. You don’t get that opportunity.”

And to anyone who did complain about Rock or what he said throughout the night, Tina likens it to ordering spaghetti at the Cheesecake Factory and then being upset at the portion size.

“This is what you ordered—you wanted this,” Fey said.

However, Tina did think that with so many people talking about so many causes throughout the night—race, sexual assault, corporate greed—the Oscars reached a point of pretension.

“Halfway through [the ceremony] I was like, this is some real Hollywood bullshit,” Fey said. “Guys, pick a lane. You’re all rich, why are you yelling at me about corporate greed?”

Fey had less of a problem though with Leonardo DiCaprio after he won his first individual Academy Award and devoted much of his acceptance speech to climate change. “I always am psyched when someone is articulate because let’s face it, actors are very stupid,” Tina joked, adding that Leo is very smart and she really liked his speech.

Fey also defended DiCaprio’s penchant for dating supermodels, saying: “It doesn’t affect the green footprint, no matter how many women you fuck.” But while she’s cool with Leo chasing younger women, Tina said the same would not be true if she were to date a younger man.

“Can you imagine if I walked in here with a 20-year-old boy?” Tina asked Howard. “I’d be like Mary Kay Letourneau.”

After the Academy Awards ended, Tina says she changed her dress and attended the Vanity Fair Oscar Party—the only after-party she went to that night. While there, Fey was thrilled to spot Caitlyn Jenner from across the room.

“I was trying so hard to have a moment with her,” Tina admitted. “She was not having me. Not on purpose but she had just come in, and you could just tell that she was like, ‘I’m the biggest deal in here and who wants to know it.'”

This year’s Vanity Fair party also featured a “photo booth” for celebs to get their picture taken by renowned Rolling Stone shutterbug Mark Seliger. So did Tina opt for having her photo taken? Definitely not.

“It is so telling,” Fey said. “It’s like, ‘Guys, you’ve just been to the Oscars, everyone saw you, but if you were feeling like you weren’t getting enough attention, you could do a photoshoot in the middle of a party.'”