Growing up with David Bowie, jamming with George Harrison, and writing his biggest hits ... on the same day

Rock legend Peter Frampton visited the Stern Show Wednesday to chat with Howard about his more than five decades in the music industry as well as his new album, “Acoustic Classics.” Check out a few of the most fascinating tales from the guitar maestro’s life and career (below).

On His Early Relationship With Music

At age five, Frampton knew he had an ear for music. It all started when Peter was watching a piano recital on television with his family but could tell something sounded off about the piano’s sound. After his family dismissed it, the announcer on the recital revealed that there had been sheet music sitting on the piano strings, causing the effect. “I preempted the Adele effect!,” Peter, who demonstrated the sound on his guitar strings, joked.

Early musical influences for Peter came through the television as well. “We had a show called ‘Six-Five Special’ in England … probably in 1957, and Cliff Richard and the Shadows piqued my interest right away, and I saw Eddie Cochran and Buddy Holly and it was the Holy Grail right there,” he explained.

“I was seven when I first picked up an instrument,” Peter told Howard, explaining that his first axe was actually a banjalele (mix of banjo and ukulele) from his grandmother. Peter’s favorite music to play was material by the Shadows, who he described as “the instrumental Beatles.”

Howard asked Peter what his first bands were. “Little Ravens at school, that was a three-piece, then the True Beats, a Shadows sound-alike, I was about 10 or 11 then.” At age 14, Peter joined the band the Preachers and soon got his first taste of success when the group was selected to perform on the TV series “Ready Steady Go.” It didn’t hurt that Rolling Stones bassist Bill Wyman “produced and managed us,” he told Howard.

Frampton said he is very aware of how lucky he was to be an aspiring musician at that time: “My son is 27, phenomenal singer-guitar player, and this is probably the worst time to start a career in music. How do you make a record and pay for it?”

On His Childhood Friendship With David Bowie

Peter not only attended school with David Jones (later Bowie), but was also very close friends with the late, great musician. “[Bowie] and George Underwood, who did a bunch of his covers, were in my father’s art class for three years.”

According to Peter, David was a normal kid, and a great actor at the time. “I didn’t know greatness at that point apart from the fact that when I went to the school on a weekend before I was actually going to the school, my father had to go to this event, and it was this outdoor fair kind of thing, and David was playing sax and singing with the Conrads on the school steps, and I said, ‘He’s doing what I want to do.'”

Howard speculated that while some, like Bowie, get into music to be stars, others do it just because they yearn to play, and Peter seemed to be in the latter category. “I just wanted to play guitar,” Peter agreed.

Bowie and Peter would later go on to play together on Bowie’s “Glass Spider” tour.

On Forming (and Leaving) Humble Pie

Howard and Frampton also went through the story of how he formed Humble Pie with Steve Marriott.

“Steve and I started a friendship,” Peter began. “He wanted me to be in the Small Faces, and I didn’t know that at the time and he wasn’t going to tell me that until he asked them. Well, he asked them if, first of all, I could come and do a session for them – a week of sessions in France for [singer] Johnny Halladay. So I was the fifth member of the Small Faces, which was my dream come true,” he recalled.

But shortly after they returned to England, Marriott informed Peter that he had left the band. “He said, ‘Can I join your band?'” Frampton recounted, “because I’d left the Herd, and he was actually helping me find some musicians for my own band.”

However, Peter told Howard he was in high demand at the time … among the same former band members. “After Steve and I had formed Humble Pie, the following day, all the Small Faces came to my dungeon apartment in London at the time, and said, ‘Would you replace Steve in the Small Faces?’ And I said, ‘You’re too late, we all could have been in the same band!'” he explained.

After three years, Peter Frampton left Humble Pie as the band was reportedly experiencing some internal and commercial troubles. However, right after Peter left, the band’s “Performance: Rockin’ The Fillmore” album became a hit, along with the single, “I Don’t Need No Doctor,” which Frampton had written.

On Jamming With Peter Green of Fleetwood Mac

As Howard peppered him with questions about collaborating with other superstar musicians, Frampton recalled a funny story about meeting fellow guitarist Peter Green.

“Things kind of happen by accident,” explained Frampton. “Like this one time I ended up at this apartment and Peter Green was there from Fleetwood Mac. Very seductive style that he had. Wonderful, wonderful player. Still is. And we were just sort of jamming, and he had his Fleetwood Mac Les Paul and I had my Les Paul, and we had no amp. So we were just putting the guitars on a closet, a cabinet to get some resonance. And we’re jamming away and he goes, ‘What sign are you?’ I said ‘I’m a Taurus,’ and he said ‘I don’t like Tauruses.’ He got up, put the guitar in his case, and walked out.”

“Very strange, he had a moment there,” said Frampton, who’s still a huge fan of Green, despite the fact that he would have liked to have finished the song together.

A big change occurred after Peter signed with A&M Records, which he said “was like going to college because they would give you all the help you wanted or leave you totally alone.”

The company put no pressure on Peter to deliver a giant hit. “They said, ‘When it’s right, we’re going to have a big hit. We’ll stick with you.’ It was amazing,” he said.

Initially, when it was time to release “Frampton Comes Alive!,” Peter tried to make it a single album for budgetary reasons. However, when Peter played it for A&M’s Jerry Moss at Electric Lady studios in New York, everything changed. “We played him both sides of the single album, and his head came up from over the console, he turned around and said, ‘Where’s the rest?'” Peter remembered. “That’s when we knew we could do a double album and he just loved it.”

A&M only charged a dollar more than a single album, which helped sales. Soon, Peter got a sense of the album’s success: “When my manager called me, about two months after it first came out, he said, ‘Are you sitting down?’ I said, ‘Yes, I’m sitting down.’ He said, ‘You’re number one.'”

Peter felt great for the moment, but a month later Peter’s manager called back, again asking if he was sitting down. “‘Get this – you’ve broken ‘Tapestry,’ Carole King’s record,'” Peter recalled for Howard. “‘You’re now the biggest selling record of all time.’ That’s when I got scared.”

Frampton explained that while the live album featured best-of material from over six years, he was now being pushed to record a follow-up in only three months. “The old rules, before the biggest-selling-album-in-the-world guy rules, were take advantage of this success, rush another one out. But the thing is, you’re as good as your last release, so I wish we had waited,” he revealed.

“I was the golden goose,” Peter said, explaining that it was a “greed” decision.

On Recording With George Harrison

Before his monstrous solo success, Peter spent a lot of time as a session musician on some classic albums, including George Harrison’s “All Things Must Pass.” As Peter explained to Howard, his involvement on “Pass” was initiated when, through a mutual friend, Peter was brought into a session the quiet Beatle was producing for singer Doris Troy. “I walk into the control room, and he’s standing behind the board, and [George] goes, ‘Hello Pete.'” Peter went on to say that George gave him the red Les Paul that he still uses to this day.

After that, Peter and George became friends, but Howard wondered what it actually meant to be friends with a Beatle. “I’d go down to stay the weekend at his place – very nice man,” Frampton said. 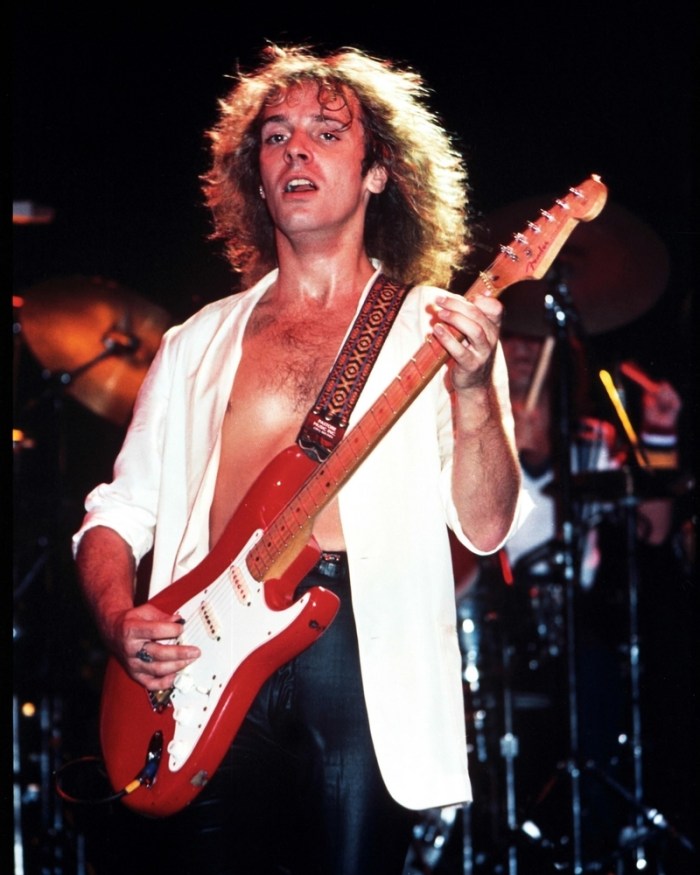 Howard asked Peter what songs on “Pass” he played on and Frampton recalled: “It was basically all the really acoustic ones. ‘If Not For You,’ the one he’d written with Bob Dylan, and then four others. But the thing is, I’m very confused as to what I played on, because George, a few weeks after the sessions, calls me up and tells me, ‘we have a killer of a producer: Phil Spector.'”

George told Peter that Phil wanted more acoustics, so Peter came into the studio to record guitars one-on-one with George for whatever Phil requested. When Howard asked if the notoriously unstable Phil Spector was acting normal that day, Peter replied, “I didn’t know what normal was.”

It was around this time that Peter also discovered his signature talkbox. “I’d heard that sound from Radio Luxembourg when I was living in England with my parents, and they would broadcast from 7 to 11 every night, very fade-y, phasing signal, but it was the only place we could listen to American music,” he told Howard. The station’s self-identification jingle utilized the talkbox, a sound Peter was fascinated with.

On Writing His Biggest Hits … On the Same Day

Amazingly, Peter wrote two of his biggest hits — “Baby, I Love Your Way” and “Show Me the Way” — on the same day. “I’m not sure if it was Raisin Bran or Corn Flakes. Left side of the bed, right side of the bed. I don’t know!” Peter joked. “I was there in the Bahamas for three weeks — that’s all I had — to write the album. We had a studio booked to record the ‘Frampton’ album, and we had just gotten off a tour,” he continued.

Peter confirmed the two songs were written for his “longing” for a specific woman, who happened to be married at the time. However, the two hooked up after the woman eventually left her husband, “unfortunately,” as Peter put it. “I don’t want to be a homewrecker,” he said.

“Baby, I Love Your Way” began with a couple chords inspired by Paul McCartney’s guitar figure on “Blackbird.”

“It doesn’t sound anything like ‘Blackbird,’ but there was a style that McCartney played that I just picked up on,” Frampton explained.

Peter then described to Howard how the tune’s first lyrics came about: “The first thing that came, I’m sitting outside, the sun is setting, and I’m going, ‘Shadows grow so long before my eyes.'”

Peter (along with guitarist-songwriter Gordon Kennedy) regaled Howard and Robin with acoustic performances of a few of his biggest hits, including “Do You Feel Like We Do” and a cover of “Norwegian Wood” before closing out the interview.

For news and tour dates, go to PeterFrampton.com