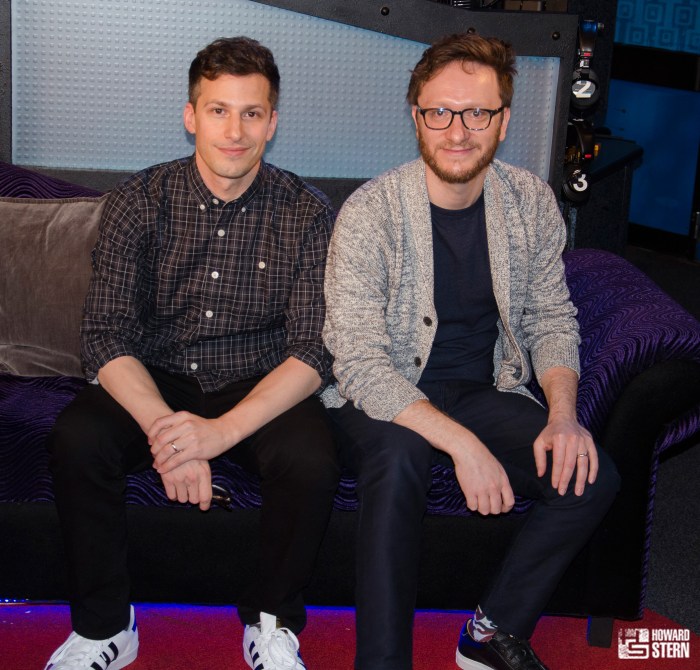 “SNL” alum and digital short pioneer Andy Samberg stopped by the studio on Wednesday morning to promote his newest movie “Popstar: Never Stop Never Stopping.” Since this was the first time the Golden Globe-winning star sat down with the King of All Media, there was a lot to cover.

Check out the highlights below:

Several “Saturday Night Live” stars have told Howard about the arduous process of auditioning for the late night show, including how Lorne Michaels and the rest of the room rarely laughs at a hopeful comedian’s material. But when Andy got his shot at a spot on “SNL,” something stood out to him about his audition.

“I heard Tina Fey distinctly laugh and that helped,” Samberg told Howard. So what does he say made the former-lead writer’s chuckle? “I did an impression of Jimmy Fallon and she laughed at that.”

Before Fey’s laughter calmed Andy’s nerves, though, he admitted to Howard that he threw up backstage prior to his audition. Andy explained that after revering the show for so long, “to be in the room is very surreal.”

Three weeks later, “SNL” invited him back for a second tryout and Andy says he was told to not prepare any new material for his next audition. A few days before he was to return to the “SNL” stage, however, he was told the exact opposite and needed to come up with a fresh idea, fast.

“The thing that I came up with that never existed before was the dumbest shit ever, but apparently is what clinched me the show, according to Lorne,” Andy said. “An out-of-breath jogger from the ’80s.”

The character, complete with thigh-exposing shorts and a never-ending need to talk about the ’80s, was dreamt up by Andy the night before his second audition. Lorne must have really liked the bit because after making Andy a “SNL” cast member, he also featured the jogging character in an episode.

Andy told Howard about meeting his long-time creative partners and fellow Lonely Island members Akiva Schaffer and Jorma Taccone in high school while growing up in Berkeley, California. According to Andy, the three hit it off right away, but when it came time to go to college they all went off in different directions. Andy attended NYU, while the other two went to schools back west.

After college graduation, the friends made an effort to meet back up and show each other the film projects they had each worked on while away at school. It was then that Andy realized the obvious and told his friends, “We’re either together or against each other because we’re making the same shit.”

They got to work and put together a sizzle reel of various sketches for a show they called “Awesometown.” Fox saw it and instantly greenlit a pilot presentation, which Andy explains is a nice way for the studio to say, “If it comes in amazing for no money, we’ll do it.”

Although the show wasn’t picked up, Andy says making this pilot was a great learning experience for them because, “All the stuff we did with full-on budget with the unions, and all that, it didn’t really crackle, it felt very tame. And then we sort of went off on our own and picked up shots in the alley and that stuff was better.”

“The thing that I hated about it was the laugh track,” Andy continued. “And this was another thing we learned. We were just young and got pushed around.” The studio had them add in these interstitial segments where it would be “us as ourselves in front of a live audience so we seem relatable,” Andy explained. But in Andy’s opinion, it all came across a bit dark and bizarre.

Bringing ‘SNL’ Into the Digital Age

In the age of viral videos, it’s hard to remember a time when your favorite show clip wasn’t instantly accessible online the next day or even mere seconds after it aired on TV. But in the late-2000s, this was far from the norm.

Howard spoke to Andy about the first “SNL” digital short to blow up – “Lazy Sunday.” “YouTube wasn’t a known thing yet, so the timing was really, really good,” Andy said. “I think everyone would say that that video was the first ‘SNL’ video to be viral.”

Andy chalks it up to being fortunate enough to be part of the show when the internet was taking on new roles. He told Howard how there were many other viral-like videos before his time at “SNL” like Will Ferrell’s “More Cowbell” routine, but he just happened to be making his short films when YouTube was priming up.

To date, the iconic digital short has more than 153 million views.

Andy’s been married since 2013 to his wife, Joanna Newsom, a well-celebrated and successful musician. The two met because “SNL” alum Fred Armisen unknowingly brought them together backstage years earlier, or as Andy puts it, “This is our meet-cute story.”

Andy told Howard that Fred met Joanna at a music festival and introduced Andy to her music, which he instantly loved. Fred ended up taking him to one of her shows and Andy was “blown away” by her talent.

After Joanna’s concert, Fred and Andy made their way backstage to meet the singer/songwriter.

“She turns to me…and she goes, ‘You’re the cunt!'” Samberg told Howard. She was referring to a Lonely Island video where Andy shows up as a character named “Steve” who, according to the song’s lyrics, is a “cunt.”

“Apparently musicians think comedians are the coolest,” Andy said. Joanna’s ability to connect with Andy on that level made his initial meeting with her much less awkward. However, Joanna was in a relationship at the time, so it wouldn’t be until years later that the two became romantically involved.

Andy told Howard they began texting as friends and once she became single, he asked her out. Howard was impressed he didn’t try to get with her that night, but Andy explained that’s not his typical approach.

The Newest ‘Popstar’ in Hollywood 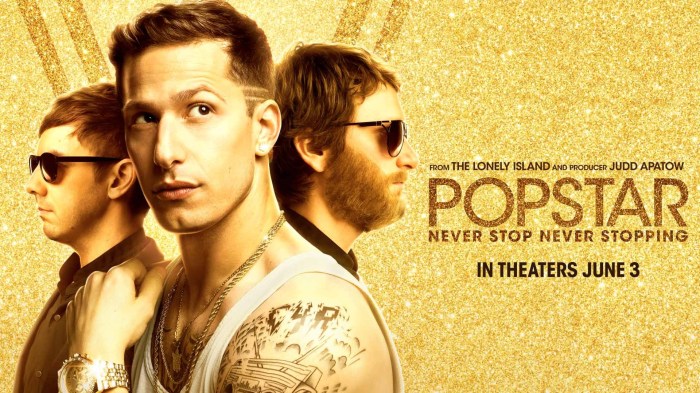 Howard pointed out that Andy has a definite plan to promote his movie, which goes up against the new “Teenage Mutant Ninja Turtles” reboot.

“I think those turtles are bad news,” Andy joked to Howard. “One of them is a pedophile. I think Raphael, probably. Donatello…drug addict.”

Howard told Andy he thought the movie looks hilarious. Some of the funniest scenes to Howard included Andy’s character having an “eye-brow specialist,” a guy who nut-punches him “to keep him humble,” and a short guy whose sole job is to work the red carpet with him to make his character appear taller.

As far as his approach to heading into opening weekend, Andy told Howard, “We’re going in with our eyes open this time.”

“We’re hoping that people know who we are more now,” Andy said. “It’s us right in our wheelhouse, doing the stuff that we’ve been told people like us doing, which is the songs and the world of music.”