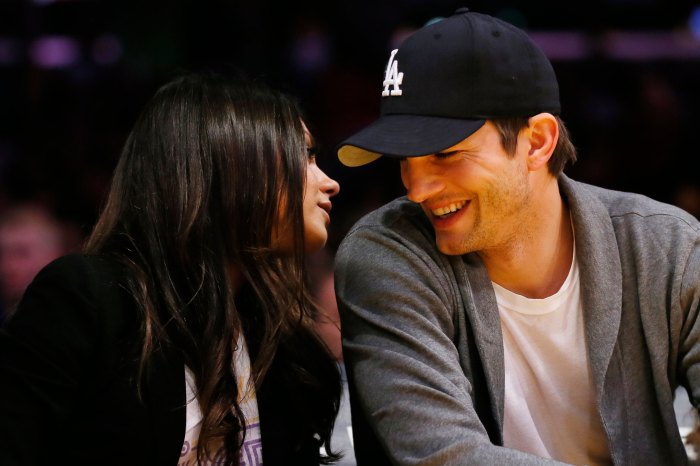 It wasn’t love at first sight for Mila Kunis and her husband Ashton Kutcher. Far from it. The two met as co-stars on the hit Fox sitcom “That ’70s Show” where they played onscreen boyfriend and girlfriend. But in real life, their five-year age difference prevented any actual romance from happening.

“I’m 14, he’s 19,” Mila told Howard of their first season together and how they eventually had to kiss on camera. “I don’t know who it’s weirder for.”

After the sitcom ended and the two went their separate ways, Mila says they stayed in touch via AOL Instant Messenger but still didn’t get involved romantically. It wasn’t until many years later that Mila noticed Ashton while at an award show.

“So I see this guy and I see his back and he’s really tall,” Mila told Howard. “And then he just turns around and it was literally like if we were in a movie, the music would start playing … I think that he, for the first time ever, took my breath away.”

At that time, Ashton’s marriage to Demi Moore had just ended and Mila wasn’t looking to get into a serious relationship, so the two decided to keep things casual, even making a handshake agreement that they would never get married to one another. So how did they wind up in love? Mila told Howard that oddly enough, both she and Ashton starred in movies about couples who tried and failed at maintaining relationships based purely on sex – Mila in “Friends With Benefits” and Ashton in “No Strings Attached.”

“If we just paid attention to these movies, we should know that shit like this does not work out in real life,” Mila said. Their love story has a happy ending, however. They have a daughter, Wyatt, and are expecting another baby soon.