“We had something to say,” Jon Bon Jovi tells Howard about band’s new album “This House Is Not for Sale” 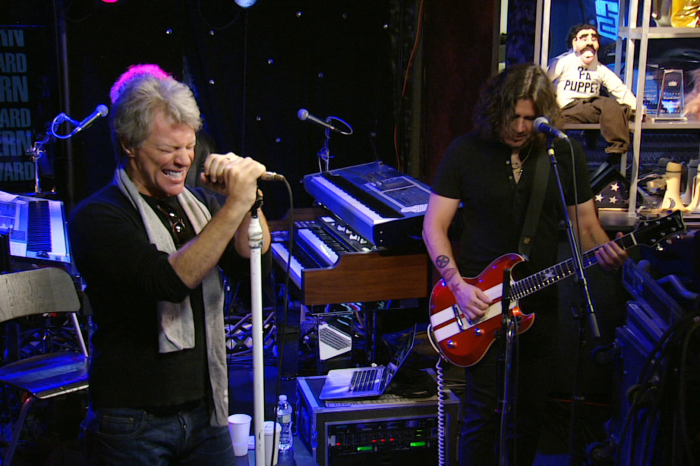 After more than 30 years of making music, there were a lot of hits for Bon Jovi to touch upon during Tuesday’s Stern Show. Howard had Jon and the boys play a few of their most successful songs as well as the title track off the band’s new album, “This House Is Not for Sale.”

Check out all of Bon Jovi’s live performances (below).

Howard still remembers when “Runaway” became a hit in the early ’80s, thanks to the song getting played on WAPP, a former New York rock radio station. Jon admitted on Tuesday that he was hesitant to allow “Runaway” on WAPP’s compilation album, however.

“It wasn’t my dream,” Jon told Howard. “It’s not like you grow up and say ‘When I grow up, I want to be on a homegrown record of local talent.'”

“Runaway” took off and Jon decided he needed to try to capitalize on the song’s success. After using studio musicians to record the original track, he now needed to assemble a band – they would become Bon Jovi and include his old friend David Bryan on keyboards, Richie Sambora on lead guitar, Alec Such on bass, and Tico Torres on drums. Tico still remembers being asked to be in the band.

“I heard the song, I met Jon, and the rehearsal was five minutes away,” he told Howard, who laughed at the commute being a selling point. Tico added, though, that he “had this feeling” about the band.

“I make sure that I give enough credit to the one back here that I love so much because Tico Torres is the heartbeat of this band,” Jon said of his longtime drummer on Tuesday.

Howard talked to the band a lot about the success they experienced after “Slippery When Wet” was released and launched Bon Jovi into a whole other level of fame.

“The success of that record obviously changed our lives,” Jon said, adding that they never again opened for another band – they had made it as headlining rock stars. “You do 240 shows and the success skyrocket happens but what you say to yourself is, ‘I gotta do it again.'”

Bon Jovi would attempt (and succeed) at another hit record with their fourth album “New Jersey,” which included their hit single “Bad Medicine.” While the album was another huge success, Jon told Howard it also took its toll on the band.

“It burned us out, it really did,” he said. Jon also revealed what he would tell his younger self from those days if he were given the chance: have faith, take your time, enjoy this a little more, it’s going to be OK.

By the ’90s, Bon Jovi had become a household name and one of the most successful rock bands in history. Jon had begun acting and also has some successful solo music projects.

“We didn’t want to break up. There was nothing like that,” Jon told Howard, saying that Richie had also put out a solo album. The band turned to clinical psychologist Lou Cox to help them figure out how to keep Bon Jovi together. Their sessions with Dr. Cox (who has a long history of helping rock bands work through their issues) led Jon to a solution.

“I said, here’s what’s going to happen: I’m going to start my own management company, we’re going to do this ourselves, we don’t need the outside world telling us the way it’s going to be, we’ve gotta have faith and if this is the direction we’re going to go in and if you trust me, this could be the Rolling Stones.”

Bon Jovi stayed together and released their fifth studio album “Keep the Faith” in 1992. Eight years later, their album “Crush” signaled a second “rebirth” of sorts, according to Jon. The first single off that album was Bon Jovi’s monster hit “It’s My Life.”

“Who Says You Can’t Go Home”

“Who Says You Can’t Go Home” equaled another No. 1 song for Bon Jovi, this time climbing to the top of the country music charts. Howard wondered how a band as successful as them still isn’t in the Rock and Roll Hall of Fame.

“We have every criteria,” Jon said about what the Hall looks for in its inductees. “It is what it is.”

“This House Is Not for Sale”

On Nov. 4, Bon Jovi will release their 13th studio album, “This House Is Not for Sale,” which is the band’s first new record since the departure of Richie Sambora. Howard wondered if Jon had any hesitation of putting out new music without his longtime right-hand man.

“How could we not continue? How fair would that be to David or to Tico or to Hugh [McDonald] or John [Shanks] who’s produced these last five records,” Jon explained. “I’m sorry, I love the guy to death but … I love to do what we do.”

Putting out a full album was important to Jon, too, even though the music industry has become a single-song marketplace.

“The business is almost impossible to understand but the artist wants to present their art and forget about commerce,” Jon said. “We had something to say and I wanted to say it in its entirety.”

Bon Jovi’s new album “This House Is Not for Sale” is available now. To check out the band’s tour dates click here.