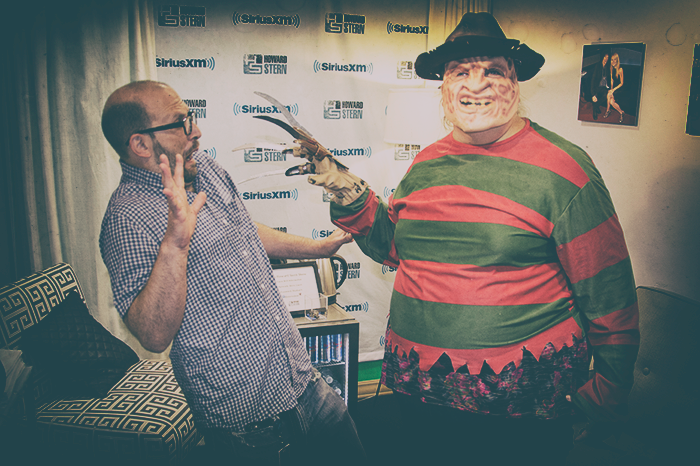 Things got started early with a phony phone call from Lee King Snatch to a religious show where he taught the hosts how to say “I love the church” in Japanese (I-have-spider-webs-up-my-gash).

Howard then opened the the first door to one of the big surprises of the morning – the Haunted House!

It’s the Ben and Ray Stern Complaining Room, Howard warned Robin. With the voices of his parents badgering him from all sides, Howard couldn’t take it for long. “This is torture I have to leave,” he said. “That was worse than ‘The Shining.'”

Unfortunately for Howard and Robin though, the next door led straight into the Benjy Feelings Room. “Hey Howar,” Benjy’s voice immediately vortexed around the walls.

“Get me out of here!” Howard pleaded.

Perez Hilton Ghost Hunter came to the rescue with a wandering finger that somehow ended up in Benjy’s behind again, allowing everyone to safely exit the room.

Howard and Robin then made their way “The Broadway Room” much to Howard’s horror as he shivered from both the cold temperature (much like every theater he’s been to) and the constant stream of coughing and sneezing patrons.

While Howard cringed, it became clear his co-host was not in the same horror. “That wasn’t scary at all,” she said.

“My hell is Robin’s heaven,” Howard concluded with a laugh.

Later in the morning, the Haunted House also offered some scares with the “Elevator Gathering Room” where other hosts from SiriusXM cornered Howard in the company elevator, the “Gary Vinyl and Throat Clearing Room,” which smelled unbearable and basically sounded like the Wrap Up Show, and the “Jackie the Joke Man Room.”