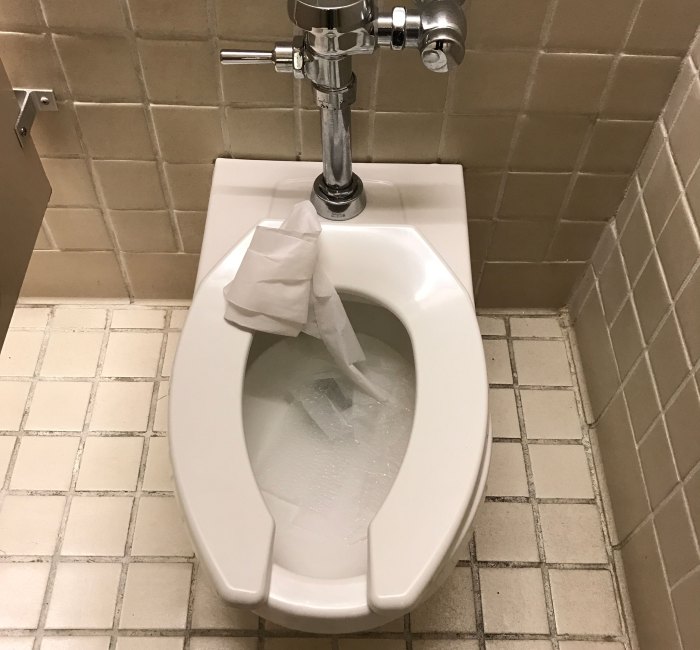 The Stern Show staff is coming clean about how dirty the SiriusXM bathrooms have become. Executive producer Gary Dell’Abate told Howard just how bad the situation is in the company’s main bathroom.

“Bathrooms here are so disgusting,” Gary said. “Right now, stall number one in the downstairs bathroom looks like somebody took a shit grenade and threw it there.”

The awfulness extends beyond the toilets, though. Gary reported the sinks are often littered with used paper towels and some employees shave and brush their teeth, leaving behind a mess that goes ignored for hours. The smell from the bathroom often seeps out into the lobby where all of SiriusXM’s high-profile guests enter.

“I walk through that lobby so quick. I haven’t moved that fast in years,” Howard said.

Gary ran into the studio to show Howard and Robin a photo of the bathroom situation. “There’s shit all around the toilet and on the floor,” he said while pointing out details in the picture (above).

“I don’t even understand how that happens,” Robin said after seeing the photographic evidence.

“What the hell is going on around here?” Howard asked. “How about we hire a bathroom attendant?”

Howard’s suggestion is seemingly already in the works – a company email went out last week announcing that bathroom attendants would be put in place soon.