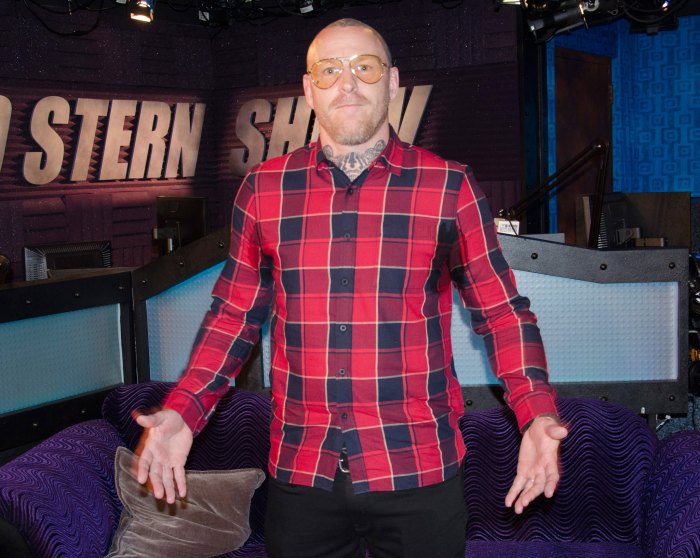 SiriusXM radio host Jason Ellis has made a lot of changes in his life recently: he’s sober, he’s engaged, and he’s no longer going to glory holes. But on Monday morning’s Stern Show he told Howard that one thing he’ll never change is his outrageous behavior which continues to entertain his legion of fans. And yes, that means he’ll continue to let MMA champions punch him in the face.

Check out all of the highlights from Jason Ellis’s interview with Howard (below).

“Dax was the person that helped me discover that I need to be in meetings,” Jason said. The two met after Dax reached out to Jason following his interview on the Stern Show during which he talked about being molested by his father as a child. Dax would later go on Jason’s SiriusXM show to reveal that he, too, was molested. Shepard then suggested that Jason get sober and attend regular meetings in order to stay clean. On Monday, Jason told Howard he’s now been sober 164 days and counting.

“I only get one shot at this,” Jason said. “The first month was really bad, but every month gets a little bit easier … I can already tell that this is the only way for me to live.”

Though Dax has been influential in Jason’s recovery, he also recently gave him a swift punch to the face while shooting the upcoming movie “CHiPs.” The film’s script called for someone to get hit in slow motion and, while the actual stuntman wasn’t willing to subject his face to the hit, Jason was happy to have Dax sock him.

“This is my ability,” Jason said. “I have a really strong head. I can take shots.”

Giving the girl he loves an engagement ring just wasn’t extreme enough for Jason Ellis. So, when he proposed to his now fiancée Katie Gilbert, he surprised her by tattooing the big question right onto her body. The moment was captured on video (above) during a bit for Jason’s show.

“She’s super hot,” Jason told Howard, who was indeed impressed by his guest’s good looking soon-to-be bride. “She’s got a real bubble butt … real boobs and stuff,” Jason continued. Stern Show fans no doubt remember Jason admitting to being bisexual during his last visit, but he told Howard his sexual exploration has slowed down a bit as of late. For example, he no longer goes to gay glory holes after catching something from an anonymous guy.

“I just got an STD from someone’s mouth,” Jason admitted. “How nasty do you have to be to have it in your mouth. I didn’t know you could do that.”

Howard asked Jason if he can really be into his fiancée if he’s seeking oral sex from guys. Jason explained that he knows he’s not gay and knows he loves Katie.

“I’ve never had sex or got a blow job that made that happen before so, if you want to call me bi or a homo, go ahead. I’m having a good time over there,” Jason said.

There’s a fine line between pleasure and pain for Jason Ellis, even when fighting former UFC champ Shane Carwin at a EllisMania 13. With one of his arms taped down, Shane still delivered a blow to Jason that pretty much knocked him out.

“I’ve been hit that hard before but not with the power that he had behind it,” Jason told Howard. The punch didn’t hurt, however. “There’s no pain, especially when you’re in front of all those people,” Jason explained. “Your adrenaline’s going. It’s performance, really.”

For Jason, having Carwin hit him is just something to do to entertain his fans. He told Howard he was certainly afraid beforehand but that wasn’t going to stop him from putting on a good show.