“I’m telling you much more than is in my book,” Andy tells Howard

During a book signing in Boston, Andy said he was approached by a handsome guy with a rugged face who told him his “girl” was a fan. According to Andy, the girl was just as hot as he was, with a slight resemblance to actress Rebecca Romijn.

“He gives me his card and he said, ‘This is my cell phone number. Seriously, we want to party with you,'” Andy told Howard. He explained being asked out for drinks or getting invited to smoke weed with fans is nothing new for him, but he was especially intrigued by this couple. So much so that he wound up texting them later that night.

“I was doing some sort of a promotion for a phone company and I was using their phone as well as another phone so I had kind of a bat phone at the time,” Andy revealed. “Had I had my normal phone, I don’t think that I would have done what I did.”

Since he was only interested in the guy at the time, Andy invited him to meet him for a drink, but only after he dropped his girl off at home.

“He said ‘Oh no, we don’t do anything separately’ and I thought that’s interesting wording there,” Andy said. Before finally falling asleep, Andy sent another text to the guy asking him to be direct in terms of what it was he wanted.

“I wake up to a fantastic series of texts that say basically that … they have explored recently with other women. They’ve never been with a guy, he’s never been with a guy in his life,” Andy told Howard. But the guy also explained that he wanted to be a good boyfriend and was interested in bringing Andy into the mix with him and his girl, since he felt a connection when they met.

Then came the pictures. The first photo sent to Andy was of the couple on vacation at Sandals Resort, fully clothed. The second photo, not so much.

“He sent me an incredible dick pic that really engaged me,” Andy told Howard. He was in and told the couple to find a “cozy spot” in his hotel’s lobby bar and that he would meet them there after his second night of book signing.

“I start texting everyone I know. I text Kelly Ripa the dick pic,” Andy said. His good pal Sarah Jessica Parker was shooting a movie in Italy, but that didn’t stop Andy from announcing his big news to her. 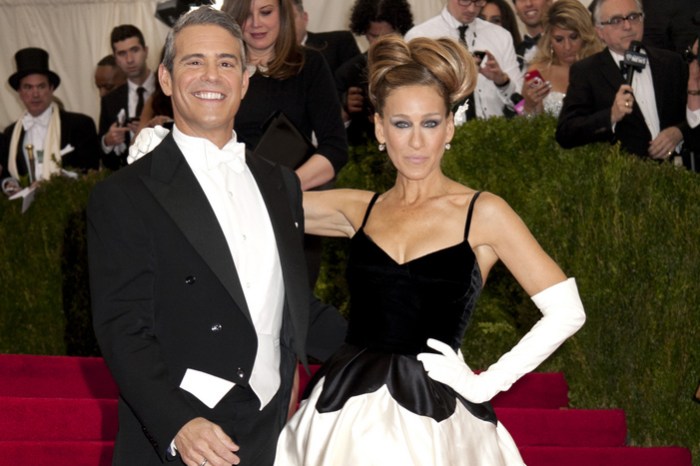 When Andy returned to his hotel that evening, he found the couple sitting at the bar just as they had planned. At first he was concerned with being catfished, but their initial excitement at seeing him put Andy at ease.

“Their reaction was such a great sign to me that these are real people,” he said. “It was actually such a normal, great reaction.”

Andy told Howard he spent at least 90 minutes at the bar with the couple which included a game of footsies with the guy. When the girlfriend went to the bathroom, Andy jumpstarted the extracurricular activities with the guy even further.

“I was immediately then like, can I touch your dick?” Andy admitted. “We definitely started then getting more explicit.”

Before heading up to his hotel room, though, Andy said his expectations of the girl’s involvement had changed. “It became clear to me that I wasn’t going, that night, to lose my virginity to this woman,” Andy told Howard. “I don’t think she, for her first time with two guys, one of them being me, was ready for that intense of an experience.”

Still, he took the couple up to his room.

“We wound up naked,” Andy said. “He actually was pretty anxious to show me what he was packing.”

Howard wondered if Andy felt inferior in the presence of the other guy’s penis. “I’m really happy with myself but, up against him, he’s gold standard,” Andy admitted.

He said there was a lot of touching by all and perhaps some oral pleasure, but the only actual intercourse had was between the couple – while Andy watched.

How did the evening conclude? “He and I kind of wound up finishing up. Just jerking off,” Andy said. “It was a little cooperative.”

He met up with the couple again after that night, once for a social event in L.A., another time for a second sex romp in New York. Andy said they went even further during round two, with finally getting blown by the guy.

In order to include the story in his book, Andy called them up and asked for their permission, promising to change their names. They agreed.

“This book is a hot potato,” Andy said.

“I’m telling you much more than is in my book because it’s you,” Andy told Howard.