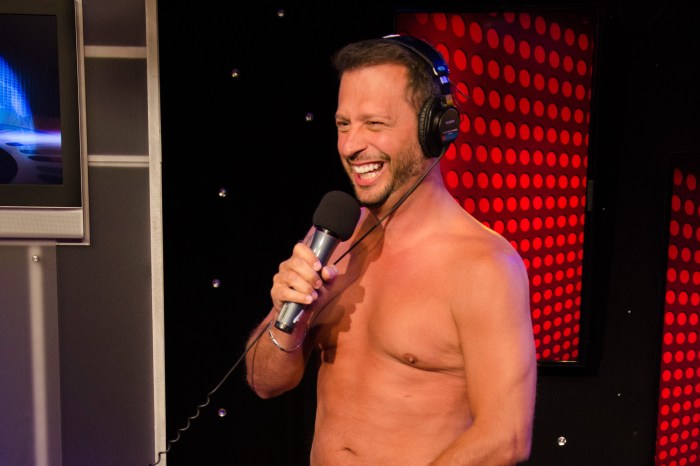 One week after administering the lie detector test which proved Sal Governale was at least a little bit gay, Ed Torian called Howard to ask if he has ever noticed the Stern Show staffer’s man boobs.

“He’s got a horrible looking chest,” Ed told Howard. “It looks like he had a breast reduction.” Ed explained that he couldn’t help but look when Sal removed his shirt during his lie detector test. What he saw has left Ed in a state of confusion ever since.

“I’ve been thinking about it all week,” Ed said. “He’s got, like, farm animal tits.”

Howard said although Sal has a flat stomach and appears to be in pretty good shape, he knows what Ed is talking about — Sal’s chest is a bit odd looking. Sal came in and explained his man boobs may be genetic.

“I inherited my dad’s tits,” Sal said. He first saw his father bare chested when he was a young child and confused his dad’s breasts for his mom’s. “I was scarred,” Sal admitted. He now realizes that his chest resembles what he saw so many years ago.

Since Ed was on the phone, Howard also wanted to ask about the validity of last week’s lie detector test results. Ed stood by his findings, telling Howard his test is “90 percent accurate.”

“It’s an investigative tool,” Ed told Howard. “I’ve been doing it for so many years now.” But Sal still questions just how accurate Ed’s method is, especially after Monday’s phone call.

“A lie detector said that I would fuck Richard in his ass and this guy’s obsessed with my tits. I don’t understand it,” Sal said.