The Sound Gizmo: Paying Homage to One of the Stern Show’s Iconic Artifacts

The Sound Gizmo: Paying Homage to One of the Stern Show’s Iconic Artifacts 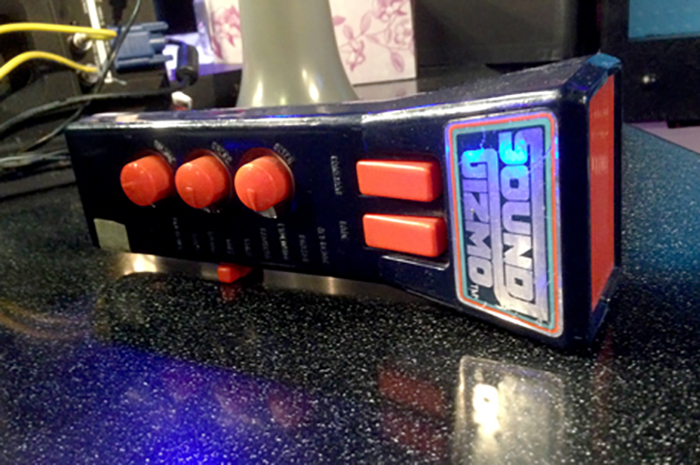 If we had a Rock and Roll Hall of Fame for Stern Show memorabilia, this object would certainly be in it.

Next to the display case of carts.

Next to the snare drum and cymbal Howard would use to punctuate a joke.

It might even be on a velvet pillow with spot lights.

It has been part of the Howard Stern Show for over 30 years. It has traveled all across America. It has been to England. And it has been heard by millions of listeners for decades.

It is the Sound Gizmo.

It arrived in a nondescript, brown cardboard box between October of 1981 and June of 1982 at the studios of WWDC, DC-101 Washington, D.C. I opened this tiny package while Howard was off being bored to death by the general manager of the station. There was a business card that came with it. A simple parcel from a fan. It probably cost $20 dollars when it was new. I put in the batteries and looked at the directions. As you looked at the face of the Sound Gizmo you saw it had different settings: 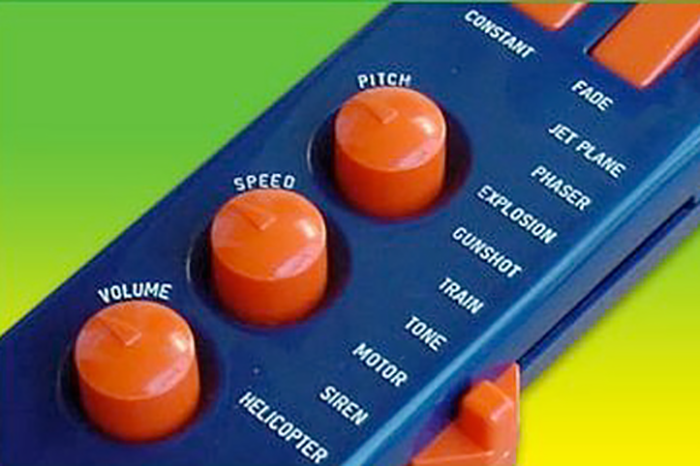 And some other knobs that you could twist to “fine tune” your sound to perfection.

(Hey, Robin you ready to do the news? [SFX]. Hmm, sheʼs busy right now, letʼs do a commercial break.)

The real beauty of the Gizmo was you could be more spontaneous and create theater of the mind on the spot. No searching for carts or walking down the hall to make a cart with the sound.

You had the sound right at your fingertips.

You have to understand that we didn’t have samplers — iPads, apps, or anything back then that was portable and that could make decent sound effects. You had to depend on carts, tapes, or records with the sound effects on them. Any sound that you wanted had to be pre-planned—meaning go to record, cue up record, put cart in machine, put in, record, hit the button, start the record and stop it when you got what you wanted.

Now it was the Sound Gizmo … and your imagination. You could put this thing in a briefcase and carry it to where you wanted to go. You could hold it, manipulate it, and create funny moments, which made this thing priceless. It was a one of a kind device.

Howard in a helicopter? Sound Gizmo.

Woman getting off in her bedroom by herself? Sound Gizmo.

Pretending to be on a jet when something stupid was happening? Sound Gizmo.

The best use of the Sound Gizmo was back in the ʼ80s (or ʼ90s) and we did a radio broadcast from a listener’s home. Greg Lake of Emerson, Lake and Palmer was the guest. Howard asked Greg to sing “Lucky Man” and Howard volunteered to do the Moog synthesizer solo done by Keith Emerson on the Sound Gizmo.

It was ridiculous, it was funny, and it worked. Keith probably played the solo on a device the size of a Buick and more cables than an old time telephone switchboard.

And Howard did it on this.

They could have saved millions in carting around their synthesizers on tour.

Well, as the years went on, technology advanced. There were samplers on Casio keyboards with big yellow buttons—instant replay machines that could hold thousands of sound effects recorded in pristine quality to help you create an “aural movie” with the touch of some buttons. Then computers came along with screens that had pages and pages of sound effects. So the little Sound Gizmo became less relevant.

But I will always remember how “The Gizmo” could make the sound of a womanʼs personal friend or Mamalooka BooBoo Dayʼs helicopter. You could reenact JFK getting shot. Or replicate the synthesizer solo to “Lucky Man” in a low tech way.

The days of cheap plastic and imagination was all you needed to make ideas on the Stern Show come to life. It made listeners laugh and smile.

If you want, you can buy one off of eBay for about $75 dollars. Or just remember the good times it helped enhance on the Howard Stern Show.