Sitting in the Tickle Chair, talking about her sex life, and more 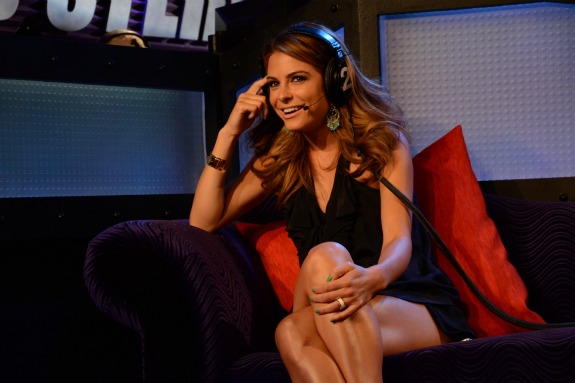 You’ll probably be able to tell who’s on Wednesday’s Stern Show just by listening to her laugh. Maria Menounos is back to chat with Howard about her latest book, “The EveryGirl’s Guide to Cooking,” but based on her previous appearances, it’s safe to say she’ll be sharing more than just her favorite recipes. Through her many years on the Stern Show, Maria has talked about how she got her hot body, her high-profile job, and her thriving online network “AfterBuzz TV.” But it’s her long-time partner Keven Undergaro that likes to come in and tell Howard all about what’s going on in their bedroom, leaving Maria shocked, embarrassed, and praying that her parents aren’t listening.

Here’s a recap of everything that’s gone down with Maria Menounos… previously on the Howard Stern Show: 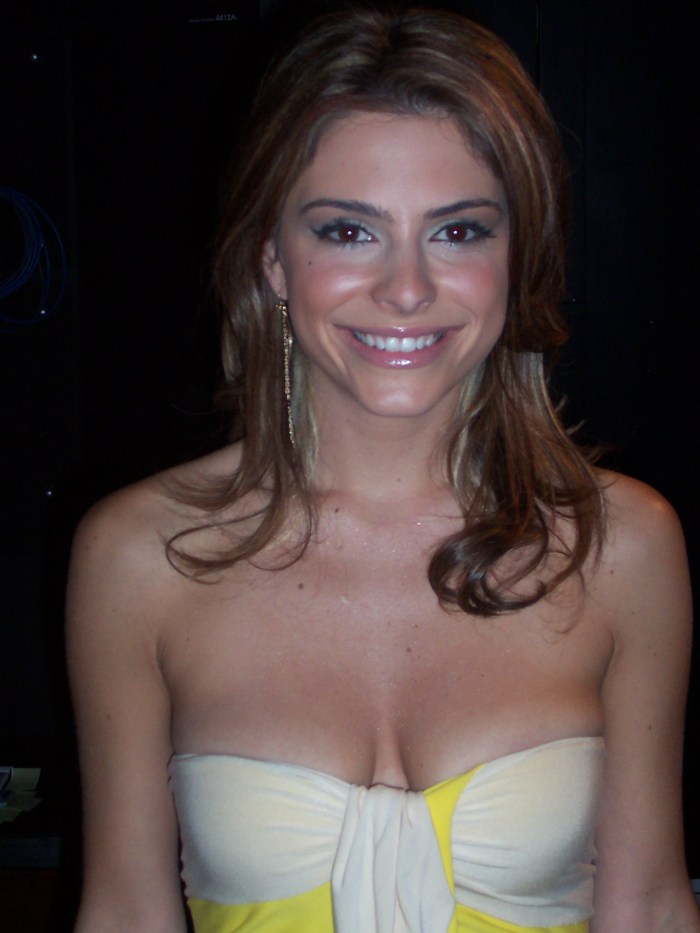 It was only a few seconds into Maria’s first interview on the Stern Show in 2004 that Howard noticed her one-of-a-kind laugh. The 24-year-old had hardly taken her seat on the couch before she let one rip.

“It’s bizarre,” Maria told Howard. “I’ve tried my hardest to get rid of it because I get a lot of shit for it.” But twelve years later Maria’s laugh hasn’t changed one bit.

Maria was a correspondent at “Entertainment Tonight” when she had her first sit-down with Howard, but the skyrocketing star didn’t let her newfound celebrity status star get in the way of their fun. Maria was willing to do anything for Howard. Anything. Even sit in the infamous Tickle Chair.

After Gary strapped her in, Howard came and tickled Maria until she told him who in Hollywood had hit on her. It took a while, but she finally admitted that President George W. Bush had “kind of” hit on her. His was the only name she was willing to give up. Maria’s wrists are small, though. So small that she actually managed to wriggle out of her straps, making her perhaps the only guest in Stern Show history to ever escape from the Tickle Chair. The fact that Maria willingly sat in it at all proved early on that she was a true Howard superfan.

Nine years later, however, Maria hit her limit when she refused to pour a beer into Richard Christy’s ass during a rousing game of Truth or Dare with Howard.

“I really pride myself on having balls to do stuff like this, but I just can’t,” Maria explained during her 2013 appearance.

A Hot Girl Gets Even Hotter 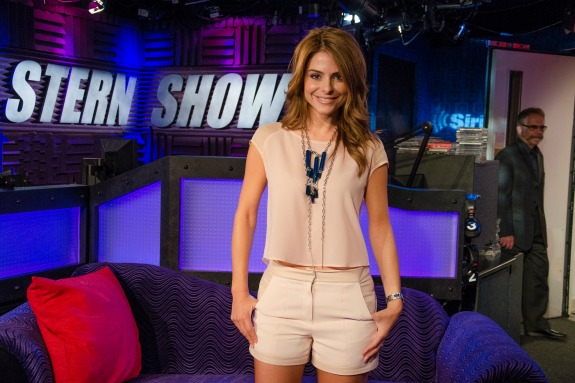 In 2011, Maria returned to the Stern Show and was in even better shape than she was during her 2004 appearance. How did she go from hot to hotter? She shared her secrets in her book “The EveryGirl’s Guide to Life.“

“What I did is, I wrote everything I ate down for a week,” Maria said, telling Howard that by logging her food, she was able to lose 40 pounds. She of course also spent a ton of time in the gym. Her hard work paid off – she told Howard that she’d just done a photoshoot for the cover of Shape magazine. 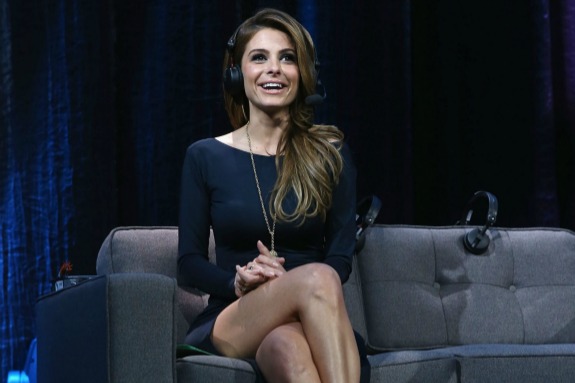 Single guys everywhere were bummed to learn that Maria had a serious boyfriend named Keven Undergaro. But Howard wondered why she seemed to keep her man hidden from the general public, pretending like she was single.

“I don’t act like I’m single,” Maria replied. “I just don’t talk about it. When someone asks me if I have a boyfriend, I say yes.”

Maria and Keven became an item while they were both students at Emerson College and she told Howard she hasn’t been with anyone since. “I’ve only been with two people my whole life,” Maria admitted in 2011.

She told Howard then that she does intend to marry Keven someday, but as far as we know they still haven’t made any wedding plans. Based on what Keven has revealed on-air (much to Maria’s dismay) the two have zero problems when it comes to intimacy.

“Honey!” Maria screamed as Keven told Howard that she is full of surprises in the bedroom.

“She’s fun,” Keven said, explaining that Maria could handle his penis, that she often talks dirty, and that oral sex is commonplace in their bedroom.

“Oh my God, my parents are going to hear this,” Maria responded, though she also did admit that she thought they’d had sex in public.

Maria made headlines after her 2012 appearance when she revealed to Howard that she’d been inappropriately touched by a physician who was supposed to be examining her throat.

“I was really young, so I was so uncomfortable,” Maria told Howard. “Keven was in the waiting room and I literally started screaming.”

Howard and Robin wondered if the doctor was just trying to give Maria a full physical, but she explained that definitely wasn’t the case. That experience along with several other unwanted incidents with physicians has made Maria rightfully afraid of doctors. Now, Maria makes sure that any doctor that examines her is a female. 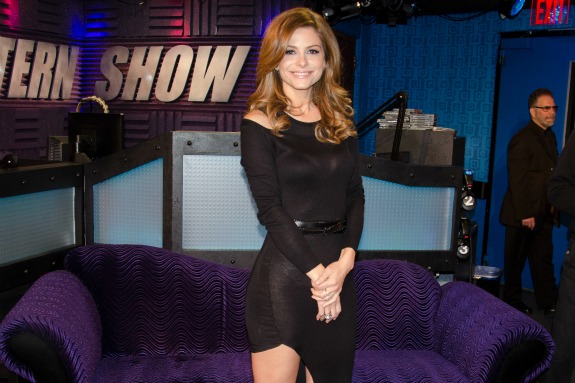 The rumor mill was raging during Maria’s season of “Dancing With the Stars” after some suspected she and her partner Derek Hough were also practicing their moves in between the sheets. Maria, who has been with her boyfriend Keven since the late ’90s, vehemently denied any romantic involvement with Hough, repeatedly telling Howard “no” whenever he asked if anything happened between them.

But when Maria says “no” it sounds more like “Noah.”

Leave it to Sal and Richard to isolate Maria’s voice and make a now classic phony phone call to an unsuspecting Southern gentleman named Noah – take a listen in the clip below. Maria also pronounces the word “yes” as “yes-sah,” so we’re still trying to find a woman named Yessah for Sal and Richard to prank. 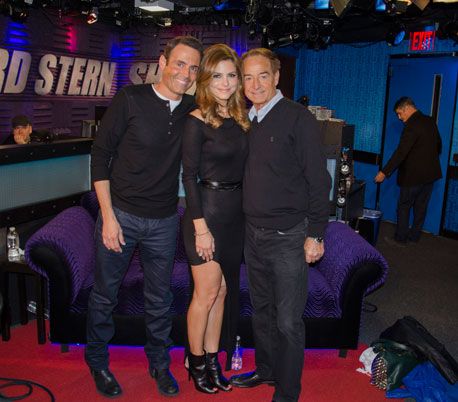 In 2014, it wasn’t just Keven who accompanied Maria into the Stern Show studio – her uninhibited dad Costas came along, too. Born in Greece and with the accent to prove it, Costas confirmed for Howard that Greeks are good lovers.

“We are,” Costas said, but Maria stopped him before he answered any of Howard’s questions about the size of his penis.

Costas co-stars with Maria and Keven on their Oxygen reality series “Chasing Maria Menounos,” which chronicles the entire family’s life as they live together under one roof. Keven said he had heard Maria’s parents getting busy at night, but Costas insisted the sounds of sex were being kept to a minimum: “I don’t think I’m making a lot of noise,” he said.

Did Costas ever have to endure the sounds of Keven and Maria having sex? “No,” he told Howard. “But I wouldn’t allow that anyway.”

Even though Keven is not Greek, Costas had come to accept his daughter’s relationship with him. “A few years back, I was against Keven,” Costas admitted, explaining he had originally dreamt that Maria would end up marrying a fellow Greek. But Costas came to accept her relationship with Keven and eventually started pulling for them to get married, in the hopes that they could be as happy as he and his wife. Which isn’t to say Mr. Menounos’ happy marriage precluded him from answering questions about his experiences before he met the missus.

Costas said he’d never been with a black woman, but he had slept with at least one Asian woman. And when asked if he’d ever had two girls at the same time, Costas answered, “maybe four.”

Tune in to hear Maria Menounos when she returns to the Stern Show on Wednesday morning!