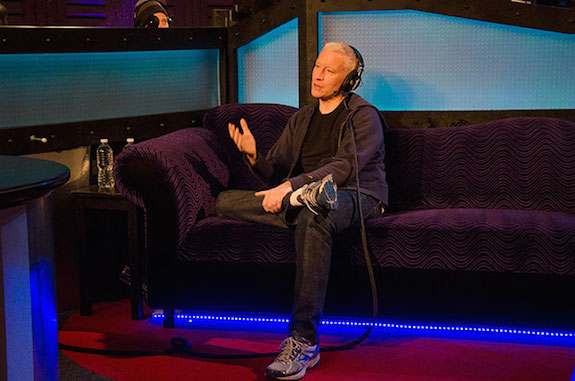 Anderson Cooper returns to the Stern Show on Monday to promote “The Rainbow Comes and Goes: A Mother and Son on Life, Love, and Loss,” the new book he co-wrote with his mother Gloria Vanderbilt. The veteran newsman, author, and dreamboat appeared on the show in 2014, when he discussed everything from his early child modeling career to coming out at a young age.

Here are some just a few highlights from that conversation with Howard.

A Strong Work Ethic Despite Growing Up Vanderbilt

Anderson grew up uniquely high society as the son of railroad heiress and fashion icon Gloria Vanderbilt. However, just because he spent his childhood in the lap of luxury did not mean he was prepared to live life sitting on his laurels.

“I was obsessed with saving money,” he told Howard in 2014. “Also, my mom made it very clear to me that she would pay for my college and stuff, and then that was it.”

Anderson also explained how his other parent helped him forge a strong work ethic and a knack for saving money. “My dad was from Mississippi from a really poor family, he died when I was 10,” Anderson told Howard. “There’s a saying my mom used to say to me when I was a kid, which is, ‘a fatherless child thinks all things possible and nothing is safe.'”

Anderson shocked Howard by telling him that “there’s no (Vanderbilt) inheritance,” but went on to explain why he didn’t see that as a bad thing. “It’s an initiative sucker,” he said. “Who has inherited a lot of money that has gone on to do things in their own life?”

His First Job in Front of the Camera

Despite his glamorous upbringing, Anderson started working much younger than the average kid. “I got a job when I was 10 because I was obsessed with the looming financial collapse,” Anderson said. “I was convinced that everything was going to collapse and I needed to start socking away money.”

That job? Child modeling — a career path Anderson pursued entirely on his own.

Anderson found success modeling for major brands, like Ralph Lauren, Macy’s, and Calvin Klein, but he left the industry at age thirteen. When Howard asked Anderson why he abandoned such a successful modeling career, he revealed it was because he had been propositioned by a male photographer.

“He somehow got my number, called me up, and offered me money,” Anderson explained. “It so freaked me out that I never told anybody. I just stopped.” 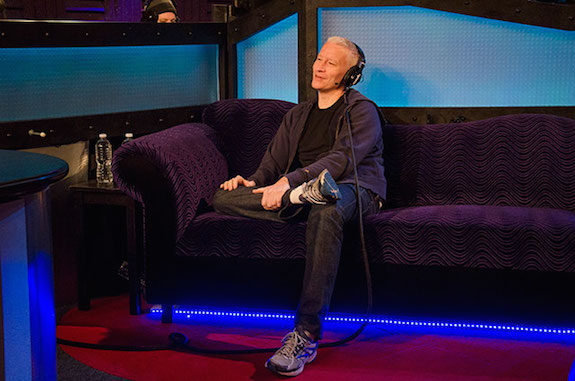 On Coming Out… To a Point

Anderson is one of the most prominent openly gay members of the media these days, but Howard wondered at what age he actually knew he was gay.

“I knew from the time I was 5 years old,” Anderson said, before explaining why homosexuality was no big deal in his household: “There were tons of gay people in my house,. … My mom invited her gay friends all the time.”

After coming to terms with his sexuality, Anderson’s next step was finding the courage to share this information with others. “I came out in high school to my friends,” he said. “I came out to my mom, I think, when I was in college.”

Howard wondered if any of this was a struggle for Anderson. “Obviously, there are a couple years when you’re twelve or thirteen, when you kind of wish, ‘Oh, it’d be better, it’d be easier,'” Anderson said, “But it just felt totally natural and totally right, and I was like ‘Let’s get started.'”

Anderson’s sexuality and his on-screen persona have remained mostly separate throughout most of his broadcasting career, which he says has earned him some criticism. But there’s a practical purpose for keeping his private life private, he said:

“I was traveling to really dangerous places by myself, with no security, nothing, to all of these countries where it’s illegal to be gay,” Anderson told Howard. “I’m wandering around Somalia by myself in the early nineties, and so, I didn’t want that to get killed.”

More than anything, Anderson explained, he “wanted the focus to be on the stories [he is] telling.”

At the time of the interview, coverage of missing Malaysia Airlines Flight 370 was dominating CNN’s airwaves. Thus, Howard of course asked Anderson the question on everyone’s mind: “Where’s the plane?”

“I don’t know,” Anderson said. “Nobody knows. That’s what’s so insane about this thing!”

Howard joked that Anderson should be out in the field looking for it. “I have to say, I’m kind of obsessed about this story,” Anderson admitted.

Catch Anderson Cooper’s new interview with Howard on Monday morning and don’t forget to check out his new book, “The Rainbow Comes and Goes.”