Legendary comedian and musician joins the Stern Show for the first time to discuss life, career, and his Tony-nominated musical "Bright Star" 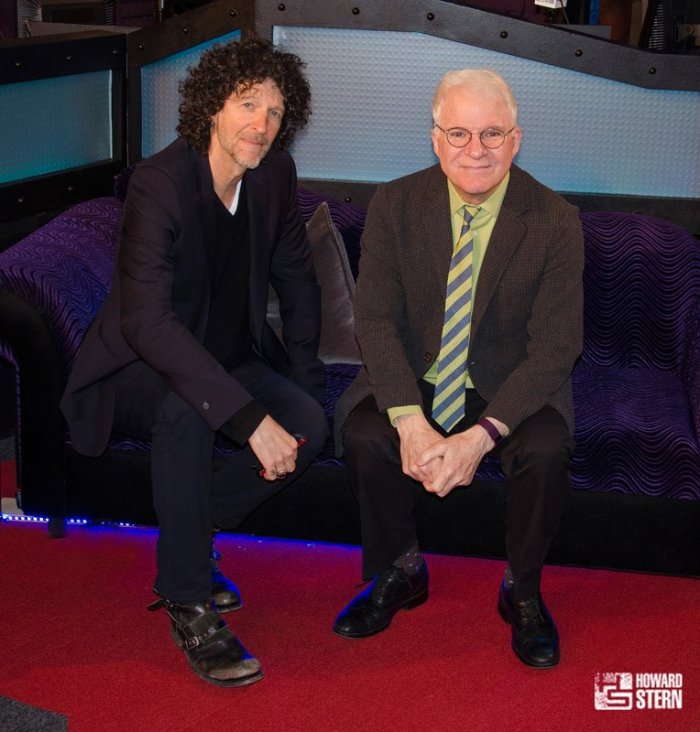 Steve Martin joined the Stern Show for the first time on Monday to discuss his hit bluegrass musical “Bright Star.” In addition to his Tony-nominated production, he and Howard’s fascinating conversation touched upon a wide-range of subjects, including Martin’s relationship with his father, an angry letter from Cher, and how Johnny Carson essentially “demoted” him on “The Tonight Show” after he ran out of material.

As Howard began to ask his first question about the comedian’s home life growing up, Martin jokingly braced himself: “Here we go. Robin, help me, help me. Oh my God. I’m crying already.”

Martin shared several stories about his father’s unusual reactions to his big and small screen successes. After the premiere of “The Jerk,” one of the most well regarded comedies of all time, for instance, the comedian said his father’s response was a prolonged period of silence followed by a one sentence review of Steve’s performance: “Well, he’s no Charlie Chaplin.”

It got worse when Steve hosted his first episode of “Saturday Night Live” and his dad decided to review the episode poorly in a professional newsletter, wrongly guessing that the appearance wouldn’t help Steve’s career.

Glenn had been an aspiring actor before having children, so Howard wondered if his negative reaction towards his son’s successes were perhaps rooted in jealousy.

“I believe my father had ambitions and children came into his life and those ambitions stopped,” Martin explained. “He had to go to work as a realtor and wasn’t able to pursue his dream. So … I don’t know, maybe he was angry. Had an angry streak.”

Martin said he became somewhat estranged from his family when he left for college, but that he and his father eventually patched up their relationship. “Later in life we reconciled,” Martin told Howard. “He became a fan. He would answer fan mail for me and he was an enthusiast.”

Martin has always had ambitions to perform on stage, but he didn’t start out on camera. Before hosting “SNL” and making hit films with the likes of Carl Reiner, he wrote television for the Smothers Brothers and then later for “The Sonny and Cher Comedy Hour.”

“I had been doing my act. I had been writing for television, which was a fluke job.” Martin told Howard, but it just wasn’t cutting it for him. “When I was about 29, I thought, ‘If I don’t have some success I better stop.'”

He tried expressing that in an interview once, but wound up accidentally offending a music legend.

Martin told Howard: “By the way, I got in trouble once with Cher. I was being interviewed later and — you know, I had written for “The Sonny and Cher” show — and I said, ‘Oh, I just don’t wanna end up in Vegas singing ‘I Got You Babe.””

So, she wrote Steve an angry letter. “She was really upset,” he said.

Martin told Howard he sent Cher a letter back after that, explaining he didn’t mean to imply there was anything wrong with her singing “I Got You Babe” in Las Vegas, that just isn’t what he wanted for himself.

The Ups and Downs of ‘The Tonight Show With Johnny Carson’

Martin has been a staple on the late night TV circuit for decades, first as a stand-up comedian and then later as a featured guest. He said many of his early years were spent on “The Tonight Show,” trying to impress legendary host Johnny Carson with his routines.

“The first time I went on, I thought, ‘I’ll be famous,” he told Howard. “But it didn’t work out that way … I’d do the show three, four times and people would be go, ‘Were you at my brother’s party the other day?’ … It just takes time.”

Many people believe Johnny would watch a comedian’s performance and then decide, on the spot, whether or not to bring them over to the couch for quick conversation, but Steve set the record straight on that.

“Everything was worked out ahead of time. He might have called a comedian over a couple of times spontaneously, but whether I was going to go to the couch was always worked out,” Steve told Howard. “It was all worked out.”

Martin said he wasn’t allowed over to Johnny’s couch the first few times he performed on “The Tonight Show,” but eventually he was a welcome guest. Howard noted that at one point it seemed like Steve only came on the show when there were guest hosts bringing him on.

“I was demoted,” Steve told Howard. “Because I ran out of material.”

“But with the guest hosts I succeeded again,” Steve continued, adding that Carson eventually brought him back on.

After that he said they formed a friendship of sorts, with Steve getting invited to Johnny’s house several times for dinners and star-studded poker games. “All we did was laugh,” he said. “The whole premise of the poker game was laughter. And then occasionally we would play poker,” he recalled.

Martin eventually hit a breaking point in his stand-up career, so he just quit.

“I was very upset. Life on the road was getting to me. It was a kind of almost violent end,” he told Howard. “I just stopped.”

“I was at a dead end in the late ’70s,” Steve added later. “I couldn’t write a joke. I couldn’t try out a joke. There was so much pressure on everything. You couldn’t experiment anymore. And I didn’t want to go to little clubs.

Of course, Steve never stopped telling jokes. He starred in funny films like “The Three Amigos” and “Roxanne” and continued appearing on “SNL.”

Howard wondered whether “SNL” executive producer ever Lorne Michaels asked him to join the permanent cast of the sketch comedy show, but Steve said he hadn’t. He also said he wouldn’t have accepted a job on the show, either, as his skill set wasn’t quite right.

Though Martin didn’t return to solo stand-up tours, he has continued to perform on stage alongside other comedy greats like Martin Short and most recently even opened for Jerry Seinfeld on a whim.

Listen to more from the interview (below).