“I’m kind of honoring what I think is the greatest rock and roll band of all time,” Pat Monahan tells Howard 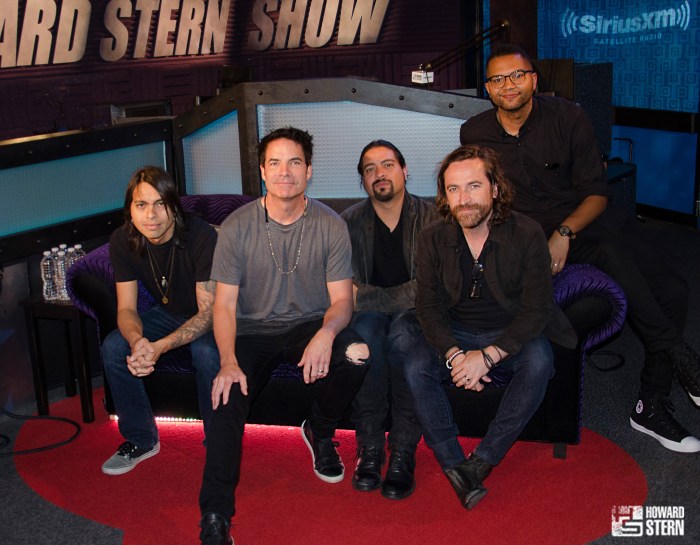 Pat Monahan and Train plugged in and rocked out at the Stern Show studio on Wednesday morning, giving Howard and his audience a preview of their new album, “Train Does Led Zeppelin II,” and upcoming concert tour in which they perform the classic “Led Zeppelin II” in its entirety.

What better way to start the day than with a gong bang and “The Lemon Song,” the first Zeppelin cover that the guys did today. They followed that up with “Heartbreaker,” “Living Loving Maid (She’s Just A Woman)” and then by request, “Moby Dick,” since Howard wanted to see Drew Shoals’ drum solo in person.

In between songs, Pat told Howard how the idea to do this tribute album came to be and how it was important to him that they got Zeppelin’s permission first.

“I wrote them a letter asking for their blessing,” Pat said. They then learned that Jimmy Page had received their request and gave them the green light on the project. “If they’re ok with us doing this, then we’re great,” Pat continued. “If in two weeks, they’re like, ‘that’s a piece of shit,’ then that’s bad for me because it misses the point.”

The point, of course, is to celebrate a band and an album that changed music history. And though Pat knows not everyone is going to appreciate him singing the songs of Robert Plant, that’s not going to stop him from trying.

“I’m not doing it for them,” Monahan said of his detractors. “I’m kind of honoring what I think is the greatest rock and roll band of all time.”

All of the the band’s profits from the album will go to support Family House, a San Francisco-based nonprofit that provides housing for children receiving treatment at the University of California San Francisco Benioff Children’s Hospital.

Listen to Train on Wednesday morning’s Howard Stern Show below and tune in to hear their live “Led Zeppelin II” show from Irving Plaza, Friday at 11pm ET on Howard 101 SiriusXM. Their album “Train Does Led Zeppelin II” also goes on sale on Friday and is available for pre-order now.