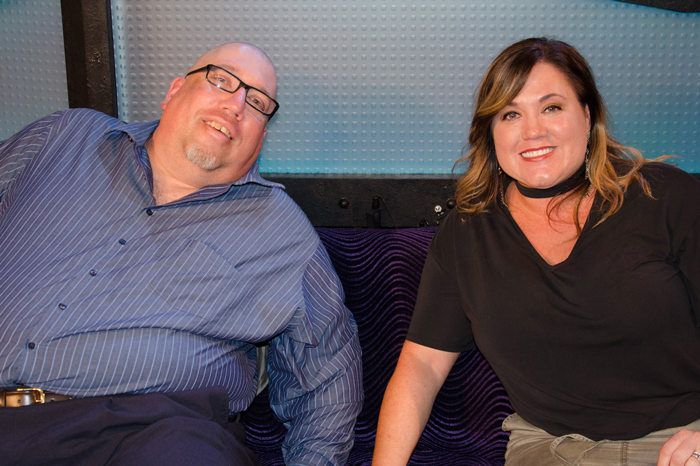 High Pitch Erik was accompanied to the studio Tuesday morning by the latest object of his obsession, a woman named Jolie from Atlanta.

“Are you suffering from Stockholm syndrome?” Howard immediately asked her.

Jolie, who owns her own business where she works as a nurse, maintained that she is not. She explained that she simply followed Erik on Twitter and was instantly hit with a direct message from the Wack Packer asking if he could visit her. She initially declined, but after months of getting to know each other she agreed to let him stay with her. He has thus far never visited her alone, however, as Gonzo Shitcock is usually in tow.

According to Jolie, Erik expects to be in constant communication over text and FaceTime. “He has expectations on me that my friends for 20 years don’t have or my mother doesn’t have,” she told Howard.

And if Jolie doesn’t respond, Erik gets extremely agitated to the point that she has to threaten to never speak to him again.

That hasn’t stopped him from trying to seal the deal with a kiss whenever he sees her, which Jolie said she can see coming from a mile away.

“One of his other girlfriends told him that women don’t like it when your lips are wet when you go to kiss them. So now he dries his lips off,” she described. When Erik begins to blot his lips with the back of his hand, she knows to turn her head.

Still, Jolie truly cares for her friend. “I do love him … love like a brother,” she quickly clarified recalling a baseball game the two attended where he proposed they adopt a child together.

Howard was doubtful to say the least, but wondered if there would ever come a time that Jolie might cave and give in to a night of passion with High Pitch. While she firmly declined, Jolie revealed that one of her friends, in fact, nearly did end up with the Wack Packer.

After a night of drinking, the “hot” 27-year-old hairdresser wanted to show Erik a good time according to Jolie. “So she comes in the house with her dress off, boobies hanging out everywhere … straddles him, tries to kiss him,” she told a flabbergasted Howard. But in the end, it was Erik who turned her down.

“I was nervous to do it there!” Erik tried to explain. “I had to respect Jolie.”

Howard suspected that Erik’s suitor may have been of the wrong gender, but High Pitch was adamant that he was into girls despite having crushes on Donnie Wahlberg, John Stamos, Wayne Brady, and Fox 5 personalities Mike Woods and Steve Lacy.