All five members of New Kids on the Block were seated in the Stern Show studio on Tuesday morning for a very special live performance. Not only did the guys sing a stripped-down version of their hit song “You Got It (The Right Stuff),” one of their biggest fans, High Pitch Erik, sat in and sang along.

Before bringing in the enthusiastic Wack Packer, Howard talked to NKOTB about being discovered in Dorchester, Mass., by record producer Maurice Starr who said he wanted to put together a pop group.

“I was a poor kid but the problem was he was poorer than me,” Donnie Wahlberg said of meeting Maurice back in the day. He recalled seeing Starr for the first time wearing a winter cap with holes in it and using a broken broomstick as a crutch.

“I was like, this guy can’t be real,” Donnie told Howard. But when he tuned in to “Saturday Night Live” and saw Maurice playing bass for rock star Peter Wolf, he was convinced this guy knew what he was talking about when it came to music.

Donnie convinced Danny Wood, his best friend since kindergarten, to join the band. They were also friends with Jordan Knight, who then recruited his older brother Jonathan. Joey McIntyre told Howard he was just 12 when he tried out for a spot in the pop group. And one other name was also an early member of NKOTB — Donnie’s little brother Mark Wahlberg. However, his time in the group was short-lived.

“Mark would rather steal cars, at the time, so he dropped out,” Donnie explained. “And he couldn’t sing.” Donnie joked that Mark’s singing voice in real life is as good as his character Dirk Diggler’s voice in the movie “Boogie Nights.” 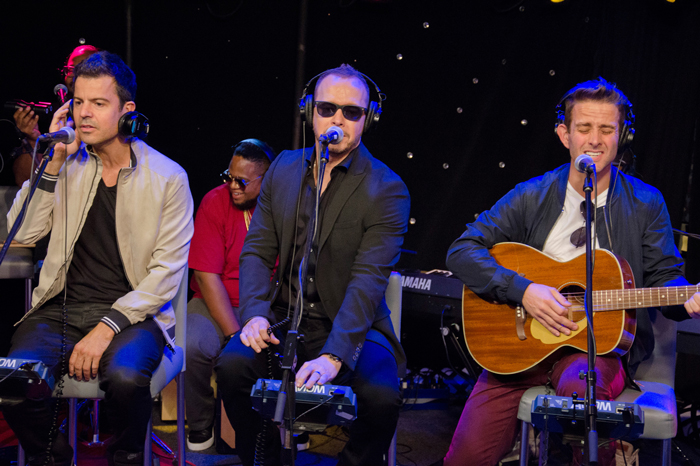 While Donnie’s brothers were convicted of auto theft, he told Howard he never tried to jack a car. “I learned from them because they always got caught,” Donnie said of figuring out early on that crime didn’t pay.

Even though Donnie was never convicted of stealing anything, that didn’t stop him and the other boys in the band from going to prison at a young age — as performers. They told Howard how some of New Kids on the Block’s first shows were actually staged at prisons.

“Boy, they gave you tough audiences, didn’t they,” a shocked Robin Quivers said.

“Fortunately my older brother was in some of those prisons,” Donnie revealed. His brother even helped get the word out about NKOTB’s shows. “Our third prison appearance, he promoted the show from prison,” Donnie added.

And if Donnie’s brother couldn’t get the inmates on NKOTB’s side, they had a sure-fire way to win over the crowd once they started their penitentiary performances.

“In the middle of our set, we each grabbed packs of cigarettes and threw them out to inmates and they went crazy,” Donnie said. “Every show was, ‘How can we win this crowd over?'”

The band’s persistence eventually paid off. After a lukewarm reception to their self-titled first album, they struck significant pay dirt with their follow up hit record “Hangin’ Tough” and their single “Please Don’t Go Girl.”

After that the band experienced a meteoric rise to fame. “Right when it started to break, we got a spot opening for Tiffany on her tour and by the end of the tour, she was our opening act and we were the headliner,” Donnie explained.

After shining a light on their early successes, NKOTB sang their smash hit “You Got It (The Right Stuff)” live in the studio. Check out their full performance in the audio clip (above).

“Oh my God! They’re awesome!” High Pitch exclaimed while sitting in the studio.

Band member Jordan Knight was amazed to learn more about the Wack Packer’s crush on Donnie. “I’m just perplexed a little bit,” Jordan said. “I didn’t know it was legit.”

Once again, Erik didn’t hold back while describing his fondness for Donnie, especially while watching him hard at work on the set of “Blue Bloods.” High Pitch has become a regular background player on the CBS drama and he told Howard which of Donnie’s scenes are his favorite.

“When he chases the bad guys and when he’s sitting at the desk and when he’s interrogating people,” Erik described. “Because he’s tough with those guys.”

Donnie also acknowledged how his association with High Pitch has caused countless fans to come up to him and ask about the Wack Packer, including sportscaster Joe Buck, whom Erik has also admitted to having a crush on.

“He goes, ‘You know High Pitch jerks off to me, too,'” Donnie revealed of what Buck told him in person.

Thirty years after skyrocketing into music superstardom, New Kids on the Block are still selling out shows around the world. Their current “Total Package” tour also includes Boyz II Men, Paula Abdul, and one technological innovation High Pitch is sure to like — the “Quick Change Cam” which lets concertgoers watch the guys from NKOTB strip down and change clothes in between songs.

“The idea is, like, even when we’re changing, the show keeps going,” Joey told Howard with a smile.